‘Rogue’ asteroids may be the norm 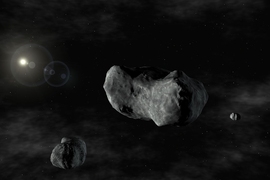 To get an idea of how the early solar system may have formed, scientists often look to asteroids. These relics of rock and dust represent what today’s planets may have been before they differentiated into bodies of core, mantle, and crust.

In the 1980s, scientists’ view of the solar system’s asteroids was essentially static: Asteroids that formed near the sun remained near the sun; those that formed farther out stayed on the outskirts. But in the last decade, astronomers have detected asteroids with compositions unexpected for their locations in space: Those that looked like they formed in warmer environments were found further out in the solar system, and vice versa. Scientists considered these objects to be anomalous “rogue” asteroids.

But now, a new map developed by researchers from MIT and the Paris Observatory charts the size, composition, and location of more than 100,000 asteroids throughout the solar system, and shows that rogue asteroids are actually more common than previously thought. Particularly in the solar system’s main asteroid belt — between Mars and Jupiter — the researchers found a compositionally diverse mix of asteroids.

The new asteroid map suggests that the early solar system may have undergone dramatic changes before the planets assumed their current alignment. For instance, Jupiter may have drifted closer to the sun, dragging with it a host of asteroids that originally formed in the colder edges of the solar system, before moving back out to its current position. Jupiter’s migration may have simultaneously knocked around more close-in asteroids, scattering them outward.

“It’s like Jupiter bowled a strike through the asteroid belt,” says Francesca DeMeo, who did much of the mapping as a postdoc in MIT’s Department of Earth, Atmospheric and Planetary Sciences. “Everything that was there moves, so you have this melting pot of material coming from all over the solar system.”

DeMeo says the new map will help theorists flesh out such theories of how the solar system evolved early in its history. She and Benoit Carry of the Paris Observatory have published details of the map in Nature.

From a trickle to a river

To create a comprehensive asteroid map, the researchers first analyzed data from the Sloan Digital Sky Survey, which uses a large telescope in New Mexico to take in spectral images of hundreds of thousands of galaxies. Included in the survey is data from more than 100,000 asteroids in the solar system. DeMeo grouped these asteroids by size, location, and composition. She defined this last category by asteroids’ origins — whether in a warmer or colder environment — a characteristic that can be determined by whether an asteroid’s surface is more reflective at redder or bluer wavelengths.

The team then had to account for any observational biases. While the survey includes more than 100,000 asteroids, these are the brightest such objects in the sky. Asteroids that are smaller and less reflective are much harder to pick out, meaning that an asteroid map based on observations may unintentionally leave out an entire population of asteroids.

To avoid any bias in their mapping, the researchers determined that the survey most likely includes every asteroid down to a diameter of five kilometers. At this size limit, they were able to produce an accurate picture of the asteroid belt. The researchers grouped the asteroids by size and composition, and mapped them into distinct regions of the solar system where the asteroids were observed.

From their map, they observed that for larger asteroids, the traditional pattern holds true: The further one gets from the sun, the colder the asteroids appear. But for smaller asteroids, this trend seems to break down. Those that look to have formed in warmer environments can be found not just close to the sun, but throughout the solar system — and asteroids that resemble colder bodies beyond Jupiter can also be found in the inner asteroid belt, closer to Mars.

As the team writes in its paper, “the trickle of asteroids discovered in unexpected locations has turned into a river. We now see that all asteroid types exist in every region of the main belt.”

The compositional diversity seen in this new asteroid map may add weight to a theory of planetary migration called the Grand Tack model. This model lays out a scenario in which Jupiter, within the first few million years of the solar system’s creation, migrated as close to the sun as Mars is today. During its migration, Jupiter may have moved right through the asteroid belt, scattering its contents and repopulating it with asteroids from both the inner and outer solar system before moving back out to its current position — a picture that is very different from the traditional, static view of a solar system that formed and stayed essentially in place for the past 4.5 billion years.

“That [theory] has been completely turned on its head,” DeMeo says. “Today we think the absolute opposite: Everything’s been moved around a lot and the solar system has been very dynamic.”

Clark Chapman, a senior research scientist at the Southwest Research Institute in Boulder, Colo., says the new map is a welcome update to the asteroid maps he and his colleagues developed in the 1980s, which included only those asteroids measuring 20 kilometers or more in diameter. In the past two decades, he says, scientists have made leaps in their understanding of asteroids’ dynamics and evolutionary history, which DeMeo and Carry have now put into context.

“What they have done is attempted to at least qualitatively describe how the unexpected relationships between asteroid size, distance from the sun, and composition fit into the current dynamical models and other insights from the past two decades,” Chapman says. “I'm very glad that this basic research has been done, and I think it is a most welcome contribution to understanding the solar system.”

DeMeo adds that the early pinballing of asteroids around the solar system may have had big impacts — literally — on Earth. For instance, colder asteroids that formed further out likely contained ice. When they were brought closer in by planetary migrations, they may have collided with Earth, leaving remnants of ice that eventually melted into water.

“The story of what the asteroid belt is telling us also relates to how Earth developed water, and how it stayed in this Goldilocks region of habitability today,” DeMeo says.