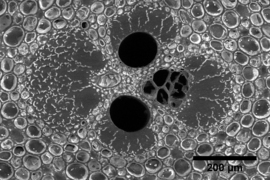 ↓ Download Image
Caption: This images shows a vascular bundle. You can see it is made up of the vessels (large dark holes, empty looking) and supporting fibers (somewhat dark very solid looking regions). The parenchyma (light circular cells) surround the vascular bundle (vascular bundle refers to the overall clover shaped structure).
Credits: Courtesy of the researchers 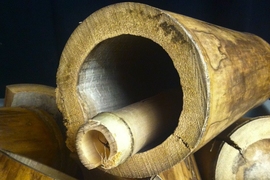 Caption:
This images shows a vascular bundle. You can see it is made up of the vessels (large dark holes, empty looking) and supporting fibers (somewhat dark very solid looking regions). The parenchyma (light circular cells) surround the vascular bundle (vascular bundle refers to the overall clover shaped structure).
Credits:
Courtesy of the researchers

Bamboo construction has traditionally been rather straightforward: Entire stalks are used to create latticed edifices, or woven in strips to form wall-sized screens. The effect can be stunning, and also practical in parts of the world where bamboo thrives.

But there are limitations to building with bamboo. The hardy grass is vulnerable to insects, and building with stalks — essentially hollow cylinders — limits the shape of individual building components, as well as the durability of the building itself.

MIT scientists, along with architects and wood processors from England and Canada, are looking for ways to turn bamboo into a construction material more akin to wood composites, like plywood. The idea is that a stalk, or culm, can be sliced into smaller pieces, which can then be bonded together to form sturdy blocks — much like conventional wood composites. A structural product of this sort could be used to construct more resilient buildings — particularly in places like China, India, and Brazil, where bamboo is abundant.

Such bamboo products are currently being developed by several companies. The MIT project intends to gain a better understanding of these materials, so that bamboo can be more effectively used structurally. To that end, MIT researchers have now analyzed the microstructure of bamboo and found that the plant is stronger and denser than North American softwoods like pine, fir, and spruce, making the grass a promising resource for composite materials.

“Bamboo grows extensively in regions where there are rapidly developing economies, so it’s an alternative building material to concrete and steel,” says Lorna Gibson, the Matoula S. Salapatas Professor of Materials Science and Engineering at MIT. “You probably wouldn’t make a skyscraper out of bamboo, but certainly smaller structures like houses and low-rise buildings.”

Gibson and her colleagues analyzed sections of bamboo from the inside out, measuring the stiffness of each section at the microscale. As it turns out, bamboo is densest near its outer walls. The researchers used their data to develop a model that predicts the strength of a given section of bamboo.

The model may help wood processors determine how to assemble a particular bamboo product. As Gibson explains it, one section of bamboo may be more suitable for a given product than another: “If you wanted a bamboo beam that bends, maybe you’d want to put the denser material at the top and bottom and the less dense bits toward the middle, as the stresses in the beam are larger at the top and bottom and smaller in the middle. We’re looking at how we might optimize the selection of bamboo materials in the structure that you make.”

Gibson and her colleagues have published their results in the Journal of the Royal Society: Interface. 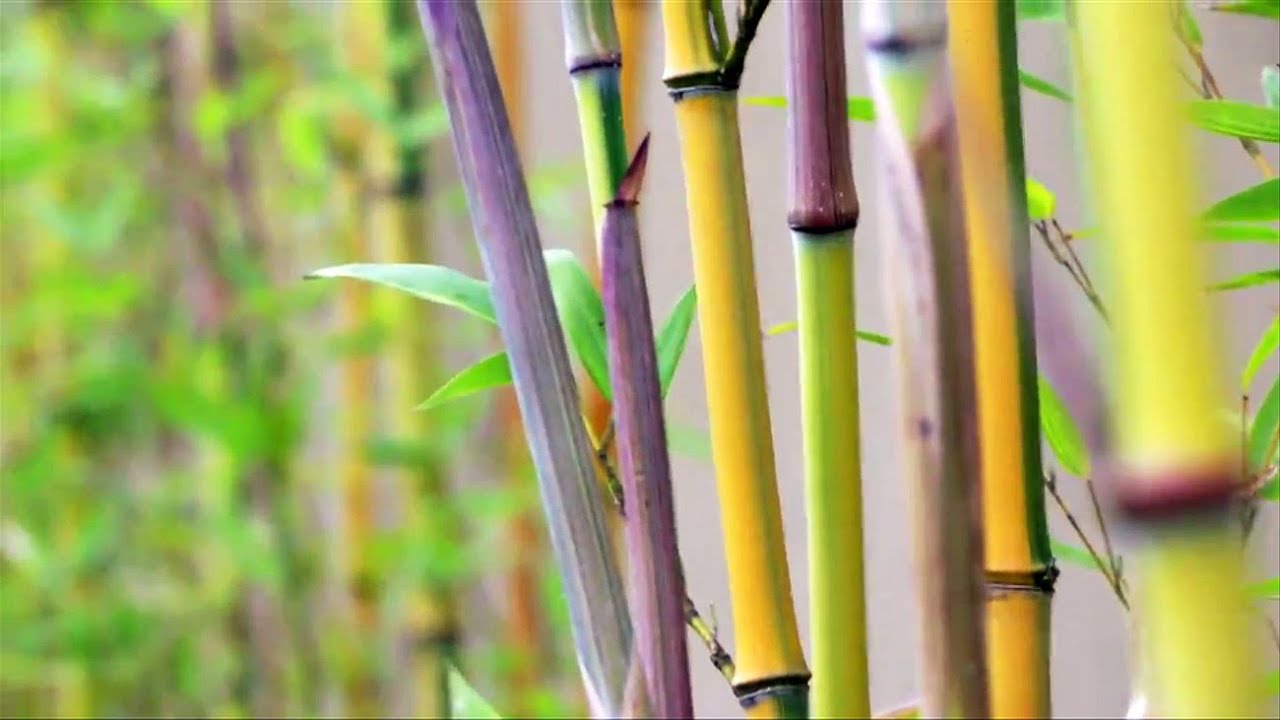 Play video
Lorna Gibson, an MIT professor of materials science and engineering, explains her group's research into using bamboo as a building material.

A look at bamboo, from the inside out

For their experiments, the researchers analyzed specimens of moso, the main species of bamboo used in China. Like most types of bamboo, moso grows as hollow, cylindrical stalks, or culms, segmented by nodes along the length of a stalk. Bamboo can reach heights of 20 meters — as tall as a six-story building — in just a few months. The stalks then take another few years to mature — but still much faster than a pine tree’s statelier, decades-long growth.

“One of the impressive things is how fast bamboo grows,” Gibson notes. “If you planted a pine forest versus a bamboo forest, you would find you can grow far more bamboo, and faster.”

Researchers used electron microscopy to obtain images of the bamboo microstructure and create complete, microscale cross-sections of the entire culm wall at different heights along the stalk.

The resulting images showed density gradients of vascular bundles — hollow vessels — that carry fluid up and down the stalk, surrounded by solid fibrous cells. The density of these bundles increases radially outward — a gradient that seems to grow more pronounced at higher positions along a stalk.

The researchers cut sections of bamboo from the inside out, noting each sample’s radial and longitudinal position along a culm, then gauged the stiffness and strength of the samples by performing bending and compression tests. In particular, they performed nanoindentation, which uses a tiny mechanical tip to push down on a sample, to gain an understanding of bamboo’s material properties at a finer scale. From the results of these mechanical tests, Gibson and her colleagues found that in general, bamboo is stiffer and stronger than most North American softwoods commonly used in construction, and also denser.

The researchers then used the stiffness and density data to create a model that accurately predicts the mechanical properties of bamboo as a function of position in the stalk. Gibson says wood processors that she works with in Canada may use the model as a guide to assemble durable bamboo blocks of various shapes and sizes.

Going forward, the processors, in turn, will send the MIT team composite samples of bamboo to characterize. For example, a product may be processed to contain bamboo along with other materials to reduce the density of the product and make it resistant to insects. Such composite materials, Gibson says, will have to be understood at the microscale.

“We want to look at the original mechanical properties of the bamboo culm, as well as how processing affects the product,” Gibson says. “Maybe there’s a way to minimize any effects, and use bamboo in a more versatile way.”

Oliver Frith, acting director of programme for the International Network for Bamboo and Rattan, headquartered in Beijing, says that very few species of bamboo have been classified, and the lack of knowledge of the material’s microstructure has impaired efforts to design efficient, optimal structural products.

“MIT’s work is very timely and has great potential to support development of the sector,” says Frith, who was not involved in the research. “While bamboo has similarities to wood, as this study shows, the material also has very distinct properties. Although current approaches to developing structural engineered bamboo have tended to focus on mimicking engineered wood products, the future will probably lie in innovating new approaches that can better enhance the natural advantages of this unique material.”

Revitalizing the land of plenty with affordable housing