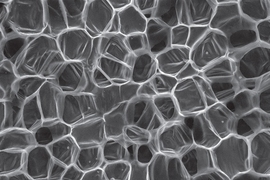 From an engineer’s perspective, plants such as palm trees, bamboo, maples and even potatoes are examples of precise engineering on a microscopic scale. Like wooden beams reinforcing a house, cell walls make up the structural supports of all plants. Depending on how the cell walls are arranged, and what they are made of, a plant can be as flimsy as a reed, or as sturdy as an oak.

An MIT researcher has compiled data on the microstructures of a number of different plants, from apples and potatoes to willow and spruce trees, and has found that plants exhibit an enormous range of mechanical properties, depending on the arrangement of a cell wall’s four main building blocks: cellulose, hemicellulose, lignin and pectin.

“If you look at engineering materials, we have lots of different types, thousands of materials that have more or less the same range of properties as plants,” Gibson says. “But here the plants are, doing it arranging just four basic constituents. So maybe there’s something you can learn about the design of engineered materials.”

A paper detailing Gibson’s findings has been published this month in the Journal of the Royal Society Interface.

To Gibson, a cell wall’s components bear a close resemblance to certain manmade materials. For example, cellulose, hemicellulose and lignin can be as stiff and strong as manufactured polymers. A plant’s cellular arrangement can also have engineering parallels: cells in woods, for instance, are aligned, similar to engineering honeycombs, while polyhedral cell configurations, such as those found in apples, resemble some industrial foams.

To explore plants’ natural mechanics, Gibson focused on three main plant materials: woods, such as cedar and oak; parenchyma cells, which are found in fruits and root vegetables; and arborescent palm stems, such as coconut trees. She compiled data from her own and other groups’ experiments and analyzed two main mechanical properties in each plant: stiffness and strength.

It turns out the large range in stiffness and strength stems from an intricate combination of plant microstructures: the composition of the cell wall, the number of layers in the cell wall, the arrangement of cellulose fibers in those layers, and how much space the cell wall takes up.

In trees such as maples and oaks, cells grow and multiply in the cambium layer, just below the bark, increasing the diameter of the trees. The cell walls in wood are composed of a primary layer with cellulose fibers randomly spread throughout it. Three secondary layers lie underneath, each with varying compositions of lignin and cellulose that wind helically through each layer.

Taken together, the cell walls occupy a large portion of a cell, providing structural support. The cells in woods are organized in a honeycomb pattern — a geometric arrangement that gives wood its stiffness and strength.

Parenchyma cells, found in fruits and root vegetables, are much less stiff and strong than wood. The cell walls of apples, potatoes and carrots are much thinner than in wood cells, and made up of only one layer. Cellulose fibers run randomly throughout this layer, reinforcing a matrix of hemicellulose and pectin. Parenchyma cells have no lignin; combined with their thin walls and the random arrangement of their cellulose fibers, Gibson says, this may explain their cell walls’ low stiffness. The cells in each plant are densely packed together, similar to industrial foams used in mattresses and packaging.

Unlike woody trees that grow in diameter over time, the stems of arborescent palms such as coconut trees maintain similar diameters throughout their lifetimes. Instead, as the stem grows taller, palms support this extra weight by increasing the thickness of their cell walls. A cell wall’s thickness depends on where it is along a given palm stem: Cell walls are thicker at the base and periphery of stems, where bending stresses are greatest.

Gibson sees plant mechanics as a valuable resource for engineers designing new materials. For instance, she says, researchers have developed a wide array of materials, from soft elastomers to stiff, strong alloys. Carbon nanotubes have been used to reinforce composite materials, and engineers have made honeycomb-patterned materials with cells as small as a few millimeters wide. But researchers have been unable to fabricate cellular composite materials with the level of control that plants have perfected.

“Plants are multifunctional,” Gibson says. “They have to satisfy a number of requirements: mechanical ones, but also growth, surface area for sunlight and transport of fluids. The microstructures plants have developed satisfy all these requirements. With the development of nanotechnology, I think there is potential to develop multifunctional engineering materials inspired by plant microstructures.”

Karl Niklas, a professor of plant biology at Cornell University, says Gibson’s engineering parallels are fitting. Plants, in a way, he says, are “largely structural things … chemical factories that are architecturally arranged.”

“Plants on Earth have evolved over three-and-a-half billion years, and that is a giant evolutionary experiment of trial and error, because the things that don’t work are extinct, and the things that do work are more abundant,” Niklas says. “We can learn things from nature and apply it to construct better panel boards, styrofoams and photovoltaics that will help society.”