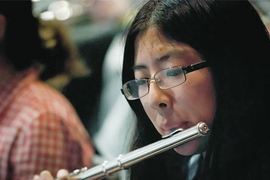 On Sept. 23, MIT President L. Rafael Reif notified the MIT community of the loss of sophomore Phoebe Wang. In that letter, Reif extended MIT’s deepest condolences to her family and friends. The remembrance below was provided to MIT News by Phoebe Wang’s family.

Phoebe Wang, 18 — a sophomore at MIT, a born builder, and a lover of nature and of classical music — passed away around Sunday, Sept. 21, in her dorm. Phoebe died peacefully.

She leaves her parents, Andrew and Yingmei, three grandparents, and two aunts.

Phoebe was born in Lafayette, Ind., on Oct. 28, 1995. She spent her early years living with her parents and grandmother in Indiana, Texas, and China, finally settling in Bethlehem, Pa. After completing middle school, Phoebe moved to Wayne, Pa., with her family, graduating in 2013 from Conestoga High School with the All-School Scholar Award and the Rochester Institute of Technology Innovation and Creativity Award. In fall 2013, Phoebe started her undergraduate studies at MIT.

Known for her sense of humor and curiosity, Phoebe is remembered for her quick wit and deep desire to explore.

When she was young, Phoebe owned several sets of Barbie dolls. She would take off their clothes to trim, sew, and tape each piece into some new “style.” She would then repeat this process again later to create more designs after disassembling and mismatching her dolls. There was a running joke in the family that the Wangs had a “Phoebe Doll” shop in the house.

A longtime lover of nature, Phoebe enjoyed exploring the woods in her neighborhood. She traveled extensively around the country, visiting many national parks and landmarks. Phoebe also loved to hike local trails.

One time, Phoebe told her mother that she was going for a short walk outside; several hours later, she had still not returned. Her mom finally reached her via cell phone. It turned out that she decided to check out all of the Valley Forge National Park trails in one hike that day.

During her exploration of the outdoors, Phoebe collected many relics, including rocks, old coins, and pieces of stained glass. They are now part of her bedroom decor, along with her origami — another passion of Phoebe’s.

When Phoebe received news of her admission to MIT, she was so excited, and counted down the days to her freshman orientation. In her first year, she completed her math and science GIRs, and started taking advanced math and science courses to explore possible majors.

Even with her full class schedule, Phoebe managed to fit in a campus job at the Music Library, and joined the MIT Symphony Orchestra to play her beloved flute. Music, especially classical music, was always part of her life. Whenever she was in a car with her parents or friends, Phoebe would often ask to turn on the radio and listen to classic music. She downloaded many pieces of music on iTunes or from the web, which she enjoyed while tackling her schoolwork or doing her chores. Moments of joy and elation would follow: “Oh yes, I played this piece before,” or, “Wow, I’ve got to find this music score and play it myself someday.”

Phoebe liked to say, “It’s almost done, but never complete until it’s due.” She packed a lot of living into her short life.

Letter to the community on "All Doors Open" event