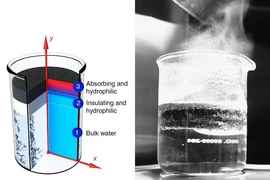 ↓ Download Image
Caption: On the left, a representative structure for localization of heat; the cross section of structure and temperature distribution. On the right, a picture of enhanced steam generation by the DLS structure under solar illumination.
Credits: Courtesy of the researchers 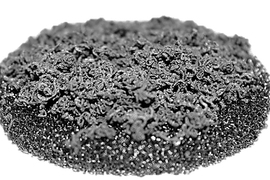 ↓ Download Image
Caption: The DLS that consists of a carbon foam (10-mm thick) supporting an exfoliated graphite layer (B5-mm thick). Both layers are hydrophilic to promote the capillary rise of water to the surface.
Credits: Courtesy of the researchers

Caption:
On the left, a representative structure for localization of heat; the cross section of structure and temperature distribution. On the right, a picture of enhanced steam generation by the DLS structure under solar illumination.
Credits:
Courtesy of the researchers

Caption:
The DLS that consists of a carbon foam (10-mm thick) supporting an exfoliated graphite layer (B5-mm thick). Both layers are hydrophilic to promote the capillary rise of water to the surface.
Credits:
Courtesy of the researchers

A new material structure developed at MIT generates steam by soaking up the sun.

The structure — a layer of graphite flakes and an underlying carbon foam — is a porous, insulating material structure that floats on water. When sunlight hits the structure’s surface, it creates a hotspot in the graphite, drawing water up through the material’s pores, where it evaporates as steam. The brighter the light, the more steam is generated.

The new material is able to convert 85 percent of incoming solar energy into steam — a significant improvement over recent approaches to solar-powered steam generation. What’s more, the setup loses very little heat in the process, and can produce steam at relatively low solar intensity. This would mean that, if scaled up, the setup would likely not require complex, costly systems to highly concentrate sunlight.

Hadi Ghasemi, a postdoc in MIT’s Department of Mechanical Engineering, says the spongelike structure can be made from relatively inexpensive materials — a particular advantage for a variety of compact, steam-powered applications.

“Steam is important for desalination, hygiene systems, and sterilization,” says Ghasemi, who led the development of the structure. “Especially in remote areas where the sun is the only source of energy, if you can generate steam with solar energy, it would be very useful.”

Ghasemi and mechanical engineering department head Gang Chen, along with five others at MIT, report on the details of the new steam-generating structure in the journal Nature Communications.

Recently, scientists have explored ways to improve the efficiency of solar-thermal harvesting by developing new solar receivers and by working with nanofluids. The latter approach involves mixing water with nanoparticles that heat up quickly when exposed to sunlight, vaporizing the surrounding water molecules as steam. But initiating this reaction requires very intense solar energy — about 1,000 times that of an average sunny day.

By contrast, the MIT approach generates steam at a solar intensity about 10 times that of a sunny day — the lowest optical concentration reported thus far. The implication, the researchers say, is that steam-generating applications can function with lower sunlight concentration and less-expensive tracking systems.

“This is a huge advantage in cost-reduction,” Ghasemi says. “That’s exciting for us because we’ve come up with a new approach to solar steam generation.”

From sun to steam

The approach itself is relatively simple: Since steam is generated at the surface of a liquid, Ghasemi looked for a material that could both efficiently absorb sunlight and generate steam at a liquid’s surface.

After trials with multiple materials, he settled on a thin, double-layered, disc-shaped structure. Its top layer is made from graphite that the researchers exfoliated by placing the material in a microwave. The effect, Chen says, is “just like popcorn”: The graphite bubbles up, forming a nest of flakes. The result is a highly porous material that can better absorb and retain solar energy.

The structure’s bottom layer is a carbon foam that contains pockets of air to keep the foam afloat and act as an insulator, preventing heat from escaping to the underlying liquid. The foam also contains very small pores that allow water to creep up through the structure via capillary action.

The researchers tested the structure by placing it in a chamber of water and exposing it to a solar simulator — a light source that simulates various intensities of solar radiation. They found they were able to convert 85 percent of solar energy into steam at a solar intensity 10 times that of a typical sunny day.

Ghasemi says the structure may be designed to be even more efficient, depending on the type of materials used.

“There can be different combinations of materials that can be used in these two layers that can lead to higher efficiencies at lower concentrations,” Ghasemi says. “There is still a lot of research that can be done on implementing this in larger systems.”

Cynthia Graber of Scientific American reports on the new MIT technique to use solar energy to generate steam.  Graber reports that the new system reaches, “85 percent efficiency in converting the solar energy into steam."

In an interview, MIT Prof. Gang Chen described the potential applications of his new spongelike structure to Kiley Kroh of ClimateProgress. "Think about water treatment, desalination or treating wastewater," Chen said. "One typical way is to evaporate the water, condense it; of course, you need an energy source to do that. In this case, if we can use solar energy, it could produce better technology."

“A new technology creates steam by harnessing solar energy, using a relatively cheap sponge-like material, and it does it with greater efficiency that ever previously achieved,” writes Douglas Main in a piece for Popular Science about a new solar sponge created by MIT scientists.

Kristine Wong reports for Takepart, a division of Participant Media, that "MIT scientists have invented a simple but ingenious device" to generate steam. Gang Chen, who heads MIT's Department of Mechanical Engineering, explains what makes it work: "First, it’s black in color, so it absorbs the light very effectively. Secondly, it’s porous to allow water to come in. Third, it’s insulating, so it absorbs sunlight and turns it into heat."

Writing for DNews, Tracy Staedter highlights a new spongelike structure developed by MIT's Gang Chen and Hadi Ghasemi to turn sunlight into steam. "The advance could one day lead to an efficient, inexpensive and emission-free way for creating steam that could be used to not only generate steam for energy but also for desalination and sterilization," reports Staedter.

Cooling when there’s too much heat