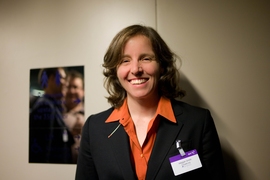 The following is adapted from an announcement this afternoon by the White House.

President Barack Obama announced today that Megan Smith ’86, SM ’88, a member of the MIT Corporation, will serve as the next Chief Technology Officer (CTO) of the U.S., and as an assistant to the president, and that Alexander Macgillivray will serve as a deputy U.S. CTO.

“Megan has spent her career leading talented teams and taking cutting-edge technology and innovation initiatives from concept to design to deployment,” Obama said. “I am confident that in her new role as America’s Chief Technology Officer, she will put her long record of leadership and exceptional skills to work on behalf of the American people. I am grateful for her commitment to serve, and I look forward to working with her and with our new Deputy U.S. CTO, Alexander Macgillivray, in the weeks and months ahead.”

On his first full day in office, Obama created the CTO position within the White House Office of Science and Technology Policy to lead administration-wide efforts to unleash the power of technology, data, and innovation.

“Megan Smith is a superb choice to be Chief Technology Officer of the United States,” MIT President L. Rafael Reif said. “She has big ideas, and she is brilliant at putting them into practice. As an MIT Corporation member, Megan has used her insight and tremendous energy to help us see around corners and seize opportunities; I am delighted to know that the American people will benefit directly from her creativity and leadership.”

As U.S. CTO, Smith will guide the administration’s information-technology policy and initiatives, continuing the work of her predecessors to accelerate attainment of the benefits of advanced information and communications technologies across every sector of the economy and every aspect of human well-being.

Smith is an internationally recognized and award-winning entrepreneur, engineer, and tech evangelist. She joins the White House from her most recent post as a vice president at Google[x], where she worked on several projects, including co-creating the “SolveForX” innovation community project and the company’s “WomenTechmakers” tech-diversity initiative.

For nine years prior, Smith was the vice president of new business development at Google, where she managed early-stage partnerships, pilot explorations, and technology licensing globally across engineering and product teams. During that time, she led the company’s acquisition of major platforms such as Google Earth, Google Maps, and Picasa, and served as general manager of Google.org during its engineering transition. Smith previously served as CEO of PlanetOut, a leading LGBT online community; helped design early smartphone technologies at General Magic; and worked on multimedia products at Apple Japan in Tokyo.

In the new book “Innovative Women: The Changing Face of Technology,” MIT alumna and U.S. Chief Technology Officer Megan Smith co-authors a chapter about how to increase opportunities for women in technology. In an excerpt provided to Fortune, Smith writes that we’re at a “tipping point” and about to accelerate the path to lasting gender equality.

Bloomberg News reports that MIT alumna Megan Smith has been appointed as the White House Chief Technology Officer. In her new role, Smith will serve as a liaison between the White House and Silicon Valley companies, and advise the government on how to better use technology.

Writing for Wired, Issie Lapowsky reports that MIT graduate Megan Smith has been named the White House Chief Technology Officer. “In addition to being a gifted programmer and technologist, Smith has been one of the country’s leading advocates in the movement to get more women into tech jobs,” writes Lapowsky.