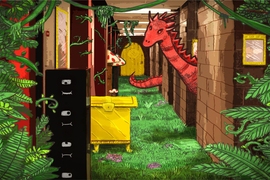 Unbeknownst to most of MIT’s daytime denizens, an underground guild of “assassins” roams Building 36 on Saturday nights during the school year. Armed with brightly colored rubber-dart blasters, these members of the Institute’s “Assassins’ Guild” — a live-action role-playing society — strategize with one another, working with allies to outwit enemy teams.

The weekly games continue a tradition begun at the Institute some three decades ago. “Patrol,” a high-action game of dart-gun combat, is the group’s gateway offering, focused more on combat strategy than on propelling a character through an interactive world. Senior Tom Boning, brandishing a bright orange plastic blaster and wearing the skull-and-crossbones headband that identifies him as game master, is in charge of explaining the rules of the game to newcomers.

“The objective is to have fun,” Boning explains. “You do this by ‘shooting’ people and dodging other people’s ‘bullets.’”

The plastic dart shooters come exclusively in fluorescent colors — the better to avoid confusion with actual weapons — and require users to load the darts one-by-one in a very specific orientation. “They don’t fire very far,” Boning cautions. “To rectify this, we have a technique called ‘throwing the dart,’ where you throw your arm forward as you fire, and you get about twice the distance.”

Besides having to keep a safe distance from those throwing darts, players are forbidden from shooting others in the face. Those who’ve been shot can “resurrect” themselves, as many times as they want, simply by proceeding to a stairwell.

Beyond the weekly sessions of Patrol, many weekends are booked for more complex Assassins’ Guild games — some of them stretching for up to 10 days.

“In our games, every player becomes a character in a real-time, real-space game of schemes, trickery, and death,” the Assassins’ Guild website says. “Come with us and experience the ancient past, the distant future, or both at the same time. Travel to a different star system as a desperate captain willing to do anything to stay alive. Become a mage and work a ritual to cast the most powerful spell ever. Become the ultimate super-spy and defeat the menacing agents of SWORD before they have the whole world under the control of their orbital mind-control lasers.”

For many students, each game is much-anticipated — for some, beginning long before they even apply to MIT. Freshman and Patrol player Victoria Longe says, “When I was looking up MIT and looking for things that I wanted to do, I also found their Assassins’ Guild and I was like, ‘I have to do this.’”

Boning first read about the Assassins’ Guild on a poster in the Infinite Corridor during a campus visit while still in high school. Susan Shepherd, also a senior, discovered the group on MIT’s website two years before she applied.

Balzac had been participating in interactive role-playing games and applied to MIT’s Association of Student Activities (ASA) to form a group that would allow students to reserve rooms for gaming and to fund attendance at interactive gaming conferences. Initially, he says, ASA staffers “were a little weirded out by this Assassins’ Guild thing.”

But throughout the group’s existence, members have worked closely with the ASA — and with the MIT Police — to ensure that it all remains in good fun.

About a year and a half ago, Capt. Craig Martin of the MIT Police began working with the Assassins’ Guild. “I reached out to them to make sure that we’re all on the same page and make sure that their games are safe for everyone,” he says. “They were pretty forthcoming. They agreed to notify me whenever they were going to have games. We talked about the importance of not using realistic-looking weapons, and making it apparent to [bystanders] that it was a game.”

Indeed, the scene of enthusiastic MIT students wielding rubber-dart guns in shades of neon is more reminiscent of analog laser tag than of anything as nefarious as an actual assassination.

Balzac, who says he now applies interactive game-playing principles to his work running a management consulting business and writing books on organizational psychology, explains that some of the Assassins’ Guild’s enduring appeal lies in its ability to transport people outside of their everyday worlds.

“When you’re playing in a fantasy in this type of game and you’re essentially playing an alter ego, it is possible to learn from your mistakes in ways that are very difficult when you’re being who you are,” he says.

The Assassins’ Guild brings people together in intense situations both collaborative and competitive. For Balzac, it even sparked a longstanding romance: He met his wife, Aimee Yermish ’88, while the two were role-playing as students at MIT.