Kettyle to step down as medical director of MIT Medical 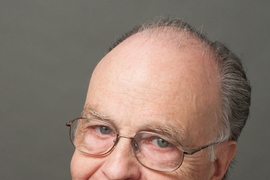 William Kettyle, medical director of MIT Medical, will step down from his position following 21 years of service. Executive Vice President and Treasurer Israel Ruiz made the announcement today in an email to MIT faculty and staff. Kettyle will continue in his current role until his successor is selected.

“During his time at MIT, Dr. Kettyle has made a number of significant contributions to the Institute,” Ruiz wrote. “As a direct result of Dr. Kettyle’s dedication to MIT and deep appreciation for MIT’s values, MIT Medical has become an integral part of the campus. Under his leadership, MIT Medical expanded its services to provide care for the entire MIT community, extended its connection to students, and increased community involvement in preventive care.”

Kettyle has held several leadership roles at MIT, most recently serving as chair of the health subcommittee of the Employee Benefits Oversight Committee. In this role, Kettyle helped MIT with strategic planning in response to the Affordable Care Act.

A native of Tacoma, Wash., Kettyle earned his bachelor’s degree from Dartmouth College in 1967, and earned medical degrees from Dartmouth Medical School and Harvard Medical School in 1968 and 1971, respectively. He completed his internship and residency at Duke University Medical Center and served as a general medical officer in the United States Navy.

Kettyle was appointed a research fellow in medicine at Harvard Medical School in 1975, was named a clinical instructor in medicine in 1977, and has served as an assistant clinical professor of medicine since 1982. He has codirected MIT’s Health Sciences and Technology (HST) course in endocrine pathophysiology since 1983, and has taught “Introduction to the Care of Patients” in the HST program since 1993.

“Dr. Kettyle’s commitment to caring for and nurturing people, his deep appreciation of the MIT culture, and his incomparable sense of humor, wit, and optimism have lifted us all,” Ruiz wrote in his email.

According to Ruiz, Kettyle will remain at MIT on a part-time basis after he steps down from the medical director role. In his new position, he will help the Institute as it plans future health care benefits and responds to new regulations.

Ruiz requested that members of the MIT community send comments or suggestions for potential medical director candidates to medical-hiring@mit.edu, or send messages by regular or interoffice mail to Room 4-204. All correspondence received will be treated as confidential.

Letter to faculty and staff regarding William Kettyle