Inside the adult ADHD brain 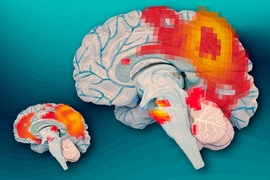 ↓ Download Image
Caption: At left, the brains of adults who had ADHD as children but no longer have it show synchronous activity between the posterior cingulate cortex (the larger red region) and the medial prefrontal cortex (smaller red region). At right, the brains of adults who continue to experience ADHD do not show this synchronous activity.
Credits: Illustration: Jose-Luis Olivares/MIT (based on images courtesy of the researchers)

Caption:
At left, the brains of adults who had ADHD as children but no longer have it show synchronous activity between the posterior cingulate cortex (the larger red region) and the medial prefrontal cortex (smaller red region). At right, the brains of adults who continue to experience ADHD do not show this synchronous activity.

Credits:
Illustration: Jose-Luis Olivares/MIT (based on images courtesy of the researchers)

About 11 percent of school-age children in the United States have been diagnosed with attention deficit hyperactivity disorder (ADHD). While many of these children eventually “outgrow” the disorder, some carry their difficulties into adulthood: About 10 million American adults are currently diagnosed with ADHD.

In the first study to compare patterns of brain activity in adults who recovered from childhood ADHD and those who did not, MIT neuroscientists have discovered key differences in a brain communication network that is active when the brain is at wakeful rest and not focused on a particular task. The findings offer evidence of a biological basis for adult ADHD and should help to validate the criteria used to diagnose the disorder, according to the researchers.

Diagnoses of adult ADHD have risen dramatically in the past several years, with symptoms similar to those of childhood ADHD: a general inability to focus, reflected in difficulty completing tasks, listening to instructions, or remembering details.

“The psychiatric guidelines for whether a person’s ADHD is persistent or remitted are based on lots of clinical studies and impressions. This new study suggests that there is a real biological boundary between those two sets of patients,” says MIT’s John Gabrieli, the Grover M. Hermann Professor of Health Sciences and Technology, professor of brain and cognitive sciences, and an author of the study, which appears in the June 10 issue of the journal Brain.

This study focused on 35 adults who were diagnosed with ADHD as children; 13 of them still have the disorder, while the rest have recovered. “This sample really gave us a unique opportunity to ask questions about whether or not the brain basis of ADHD is similar in the remitted-ADHD and persistent-ADHD cohorts,” says Aaron Mattfeld, a postdoc at MIT’s McGovern Institute for Brain Research and the paper’s lead author.

The researchers used a technique called resting-state functional magnetic resonance imaging (fMRI) to study what the brain is doing when a person is not engaged in any particular activity. These patterns reveal which parts of the brain communicate with each other during this type of wakeful rest.

“It’s a different way of using functional brain imaging to investigate brain networks,” says Susan Whitfield-Gabrieli, a research scientist at the McGovern Institute and the senior author of the paper. “Here we have subjects just lying in the scanner. This method reveals the intrinsic functional architecture of the human brain without invoking any specific task.”

In people without ADHD, when the mind is unfocused, there is a distinctive synchrony of activity in brain regions known as the default mode network. Previous studies have shown that in children and adults with ADHD, two major hubs of this network — the posterior cingulate cortex and the medial prefrontal cortex — no longer synchronize.

In the new study, the MIT team showed for the first time that in adults who had been diagnosed with ADHD as children but no longer have it, this normal synchrony pattern is restored. “Their brains now look like those of people who never had ADHD,” Mattfeld says.

“This finding is quite intriguing,” says Francisco Xavier Castellanos, a professor of child and adolescent psychiatry at New York University who was not involved in the research. “If it can be confirmed, this pattern could become a target for potential modification to help patients learn to compensate for the disorder without changing their genetic makeup.”

However, in another measure of brain synchrony, the researchers found much more similarity between both groups of ADHD patients.

Both groups of adult ADHD patients, including those who had recovered, showed patterns of simultaneous activation of both networks. This is thought to be a sign of impairment in executive function — the management of cognitive tasks — that is separate from ADHD, but occurs in about half of ADHD patients. All of the ADHD patients in this study performed poorly on tests of executive function. “Once you have executive function problems, they seem to hang in there,” says Gabrieli, who is a member of the McGovern Institute.

The researchers now plan to investigate how ADHD medications influence the brain’s default mode network, in hopes that this might allow them to predict which drugs will work best for individual patients. Currently, about 60 percent of patients respond well to the first drug they receive.

“It’s unknown what’s different about the other 40 percent or so who don’t respond very much,” Gabrieli says. “We’re pretty excited about the possibility that some brain measurement would tell us which child or adult is most likely to benefit from a treatment.”

The research was funded by the Poitras Center for Affective Disorders Research at the McGovern Institute.

Writing for The New York Times, Richard Friedman highlights how MIT researchers examined brain activity in adults with A.D.H.D. They found that “adults who had had A.D.H.D as children but no longer had it as adults had a restoration of the normal synchrony pattern, so their brains looked just like those of people who had never had it.”

MIT scientists have compared the brain activity of adults who had ADHD as children and adults who still have the disorder, reports Melissa Malamut in Boston Magazine. Researchers uncovered, “key differences in a brain communication network that is active when the brain is at wakeful rest and not focused on a particular task,” Malamut writes.

Ready to learn? Brain scans can tell you