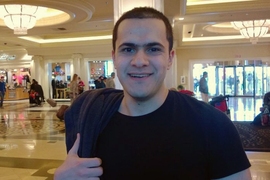 When Hadi Kasab was a boy in Lebanon, he went through a phase of carrying a small briefcase to school.

“He already knew that he wanted to be an engineer,” Kasab’s younger sister, Jana, recalls — and the young Hadi thought that carrying a briefcase was something all engineers did.

Her brother never lost his sense of wonderment at the world, Jana Kasab says: “He was really always a 5-year-old on the inside.”

Hadi Kasab, 23, was found dead in his room in MIT’s Sidney Pacific dormitory on the evening of March 6. He had been a second-year graduate student in MIT’s program in Computation for Design and Optimization, on track to graduate with his master’s degree in June.

“He was very quiet most of the time,” Jana Kasab says. “We used to say that he lived in his own world.” At a kindergarten graduation ceremony, her distracted but driven brother marched straight across the stage, without even stopping to receive his certificate.

He was also humble, Jana Kasab says: “My mother was once chatting with Hadi via Skype. She was telling him about people’s reactions when they found out that her son is in MIT. Hadi hated that. He didn’t like to gloat about it — but Mom, as a proud parent, did. So he promised Mom that he’d buy her an umbrella with the MIT logo on it, so that she’d stop telling people that her son is in MIT, and instead people would take the initiative to ask her.”

‘Achieving goals, one after another’

Born on Sept. 12, 1990, Hadi Kasab was a native of Saida, Lebanon, a city of 80,000 on the Mediterranean Sea, about 25 miles south of Beirut. As a high school student, he was drawn to mathematics and physics, and developed an interest in the aerospace industry.

“Saida is a relatively traditional city,” Mirhi says. “So Hadi grew up within a small community where expectations might be limited to getting a bachelor’s degree and a job later.”

But, Mirhi says, his friend was not satisfied with that limited trajectory.

“He took upon himself many challenges that made him very outstanding,” Mirhi says. “He was purposeful as he set a number of goals in his mind. He exerted great … effort to secure the top rank in the South Governorate of Lebanon in the Baccalaureate official exams, before getting admitted to the best college in Lebanon and the Middle East. He was achieving goals, one after another.”

As an undergraduate at AUB, Mirhi says, Kasab carried a heavy course load, but still found time to contribute to others’ research projects. “In fact, he worked on my senior project as an undergraduate researcher,” Mirhi says, “and he significantly contributed to the work. He definitely made use of any opportunity to keep his learning curve steadily growing.”

A love of challenges

Kasab’s program at AUB required him to complete an internship during the summer after his junior year. Inspired by some of his professors who were MIT alumni, Kasab aimed for the Institute.

“His interest in MIT stemmed out from his love for challenge,” Mirhi says. “MIT seemed to be the most logical extension of his academic profile … that environment that is rigorous enough for hard-working students to excel, yet open enough for them to meet brilliant people with common interests.”

Kasab secured the summer internship he sought, and came to MIT in the summer of 2011 as a visiting undergraduate research associate in the Uncertainty Quantification Lab within MIT’s Department of Aeronautics and Astronautics. While there, he developed simulations to investigate the wettability of transparent media.

After returning to Beirut for his senior year at AUB — graduating in June 2012 with a near-perfect GPA — Kasab gained admission to MIT’s master’s program in Computation for Design and Optimization (CDO).

A ‘brilliant mind at work’

Kasab’s advisor at MIT was Zoltan Spakovszky, a professor of aeronautics and astronautics and the director of MIT’s Gas Turbine Laboratory, where researchers work on power and propulsion systems and new aircraft designs to limit environmental impacts, as well as technologies to reduce aircraft noise.

“I am very privileged and proud to have had the chance to do research with Hadi, to see his brilliant mind at work, and to experience the impact of his research,” Spakovszky says. “He was one of the smartest master’s students I have advised.”

“Hadi’s work focused on the development of a fast method for computing the acoustic shielding of engine noise by the airframe,” Spakovszky says. “The problem requires knowledge and skill in acoustics and applied mathematics, a perfect match for Hadi’s exceptional mathematical talent. Borrowing ideas from geometrical optics, Hadi developed and implemented new ways to capture the effects of acoustic diffraction and reflection.”

Compared to current tools that take days to run on a supercomputer, Spakovszky says, the noise-assessment capability that Kasab helped develop runs in seconds on a laptop to optimize the configuration of unconventional aircraft — opening up new opportunities in aircraft design.

“Hadi was very determined, always going all the way until a satisfactory solution was found,” Spakovszky says, adding: “Hadi was a very noble and humble person and had a hard time taking credit for his great achievements. He was extremely smart and had a very broad mind. You could talk to him about anything, including even literature. He was very sociable and witty. He always brought a warm atmosphere to the room.”

While at MIT, Mirhi says, Kasab cultivated a love for the outdoors, especially hiking and rock-climbing. He developed a passion for cooking — in particular, steak — and regularly went to the gym. He loved “The Daily Show with Jon Stewart”; in January, the two friends traveled to New York to see a live taping of the show.

“Hadi was a young man of great promise,” Mirhi says. “All who know him predicted a very bright future ahead. Everyone was waiting for Hadi’s next big thing. But he left early.”

In addition to his sister, Jana, Hadi Kasab is survived by his parents, Saeb and Dalal Kasab, and a brother, Karim Kasab, all of Saida, Lebanon.