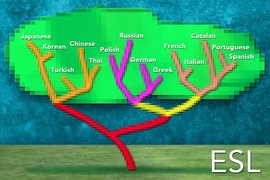 ↓ Download Image
Caption: An artistic rendition of a language similarity tree based on the researchers' new algorithm. “The striking thing about this tree is that our system inferred it without having seen a single word in any of these languages,” Yevgeni Berzak says.
Credits: Illustration: Jose-Luis Olivares/MIT 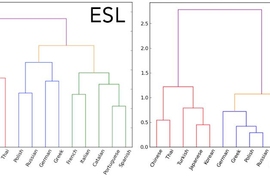 ↓ Download Image
Caption: These two Language Similarity Trees were constructed using the Ward agglomerative hierarchical clustering algorithm. The left tree uses the ESL derived distances; the right tree uses the WALS-based shared-pairwise language distances. The left tree, based on 14 languages in the data set, is almost identical to the family tree (right), generated from data amassed by linguists.
Credits: Courtesy of the researchers

Caption:
An artistic rendition of a language similarity tree based on the researchers' new algorithm. “The striking thing about this tree is that our system inferred it without having seen a single word in any of these languages,” Yevgeni Berzak says.
Credits:
Illustration: Jose-Luis Olivares/MIT

Caption:
These two language similarity trees were constructed using the Ward agglomerative hierarchical clustering algorithm. The left tree uses the ESL derived distances; the right tree uses the WALS-based shared-pairwise language distances. The left tree, based on 14 languages in the data set, is almost identical to the family tree (right), generated from data amassed by linguists.
Credits:
Courtesy of the researchers

Computer scientists at MIT and Israel’s Technion have discovered an unexpected source of information about the world’s languages: the habits of native speakers of those languages when writing in English.

The work could enable computers chewing through relatively accessible documents to approximate data that might take trained linguists months in the field to collect. But that data could in turn lead to better computational tools.

“These [linguistic] features that our system is learning are of course, on one hand, of nice theoretical interest for linguists,” says Boris Katz, a principal research scientist at MIT’s Computer Science and Artificial Intelligence Laboratory and one of the leaders of the new work. “But on the other, they’re beginning to be used more and more often in applications. Everybody’s very interested in building computational tools for world languages, but in order to build them, you need these features. So we may be able to do much more than just learn linguistic features. … These features could be extremely valuable for creating better parsers, better speech-recognizers, better natural-language translators, and so forth.”

In fact, Katz explains, the researchers’ theoretical discovery resulted from their work on a practical application: About a year ago, Katz proposed to one of his students, Yevgeni Berzak, that he try to write an algorithm that could automatically determine the native language of someone writing in English. The hope was to develop grammar-correcting software that could be tailored to a user’s specific linguistic background.

With help from Katz and from Roi Reichart, an engineering professor at the Technion who was a postdoc at MIT, Berzak built a system that combed through more than 1,000 English-language essays written by native speakers of 14 different languages. First, it analyzed the parts of speech of the words in every sentence of every essay and the relationships between them. Then it looked for patterns in those relationships that correlated with the writers’ native languages.

In analyzing the results of their experiments, Berzak, Katz, and Reichart noticed a remarkable thing: The algorithm’s probability estimates provided a quantitative measure of how closely related any two languages were; Russian speakers’ syntactic patterns, for instance, were more similar to those of Polish speakers than to those of Japanese speakers.

When they used that measure to create a family tree of the 14 languages in their data set, it was almost identical to a family tree generated from data amassed by linguists. The nine languages that are in the Indo-European family, for instance, were clearly distinct from the five that aren’t, and the Romance languages and the Slavic languages were more similar to each other than they were to the other Indo-European languages.

“The striking thing about this tree is that our system inferred it without having seen a single word in any of these languages,” Berzak says. “We essentially get the similarity structure for free. Now we can take it one step further and use this tree to predict typological features of a language for which we have no linguistic knowledge.”

By “typological features,” Berzak means the types of syntactic patterns that linguists use to characterize languages — things like the typical order of subject, object, and verb; how negations are formed; or whether nouns take articles. A widely used online linguistic database called the World Atlas of Language Structures (WALS) identifies nearly 200 such features and includes data on more than 2,000 languages.

But, Berzak says, for some of those languages, WALS includes only a handful of typological features; the others just haven’t been determined yet. Even widely studied European languages may have dozens of missing entries in the WALS database. At the time of his study, Berzak points out, only 14 percent of the entries in WALS had been filled in.

The new system could help fill in the gaps. In work presented last month at the Conference on Computational Natural Language Learning, Berzak, Katz, and Reichart ran a series of experiments that examined each of the 14 languages of the essays they’d analyzed, trying to predict its typological features from those of the other 13 languages, based solely on the similarity scores produced by the system. On average, those predictions were about 72 percent accurate.

The 14 languages of the researchers’ initial experiments were the ones for which an adequate number of essays — an average of 88 each — were publicly available. But Katz is confident that given enough training data, the system would perform just as well on other languages. Berzak points out that the African language Tswana, which has only five entries in WALS, nonetheless has 6 million speakers worldwide. It shouldn’t be too difficult, Berzak argues, to track down more English-language essays by native Tswana speakers.

“There are folks who have been debating to what degree, when you learn a second language, you’re just starting over and learning the structure of the language,” says Robert Frank, chair of Yale University’s linguistics department. “Another hypothesis is that you think of the new language as a modified version of your language. Some researchers think that such modifications take place at a fairly superficial level. But others think they operate over bits of abstract grammar."

The MIT researchers’ technique could help sharpen that debate, Frank says. The ability to predict features of speakers’ native languages from the syntax of their written English, he says, shows that “there is clearly a reflection of the grammar of the original language. So it’s not that they just start over from scratch.”

In French, for instance, objects follow verbs — unless they’re pronouns, in which case they precede the verbs. In Yiddish, both pronouns and definite objects precede the verb, but other objects do not. So are French and Yiddish verb-object languages or object-verb languages?

Frank would like to see how well the MIT researchers’ technique predicts classifications under other, more fine-grained and abstract typological systems. “What are the underlying features that would determine, ‘Oh, it’s just the pronoun, or it’s only objects that have particular kinds of properties?’” Frank says. “Cautiously, I’m optimistic. I’m excited about the possibility that even more abstract properties are going to be reflected in the English production.”

Shankar Vedantam of NPR reports on Dr. Boris Katz’s new research examining how errors in written English can reveal clues about other languages. “By analyzing the patterns of mistakes that native speakers of two languages make in English, the computer can say, look, these two languages might actually be related to one another,” Vedantam explains.