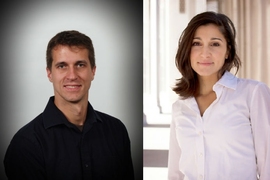 Two new faculty members — Lydia Bourouiba and Benjamin Kocar — joined the Department of Civil and Environmental Engineering (CEE) in January, expanding the department’s strengths in the mechanistic modeling of the fluid dynamics of disease transmission and the biogeochemical processes governing the cycling of contaminants in ecosystems.

“The department welcomes Lydia and Ben, and we are excited about the strengthening of key strategic directions,” says professor Markus Buehler, head of CEE. “Faculty renewal is critically important, and the influx of new research and educational initiatives defines the future of the department.”

Buehler says that accelerated faculty hiring is a strategic priority of the department, providing the opportunity to impact key areas in CEE, the School of Engineering, and the Institute.

Assistant professor Lydia Bourouiba is an applied mathematician who works on problems at the interface of fluid dynamics and disease transmission. Her aim is to elucidate the physical mechanisms that shape disease transmission dynamics in human, animal, and plant populations. Her approach focuses on using fundamental fluid dynamics to examine pathogen mobility rather than the more traditional study of host mobility and interaction.

“There are models of disease at the cellular level and models of disease transmission at the macro population level, but in the gap between we know very little,” Bourouiba says. “I’m working in that intermediate level using a combination of experiments and mathematical modeling to better understand the dynamics of contact and spread of disease.”

The classical approach to epidemiological modeling assumes that pathogens are primarily transmitted from one individual to another based on direct encounters between potential hosts. But many pathogens are transmitted through fluid media, for example via the high-speed ejection induced by a cough or sneeze. They then can enter the ventilation systems of buildings and spread without direct host interaction, Bourouiba says. Similarly, spores from plant diseases can be launched at high speed when a raindrop hits a contaminated leaf, causing the leaf to catapult the spore into the air where it may land on another leaf.

Prior to joining the CEE faculty, Bourouiba was a Canadian Natural Sciences and Engineering Research Council (NSERC) postdoctoral fellow and lecturer in the MIT Department of Mathematics. Before this she was a NSERC postdoctoral fellow at the Centre for Disease Modelling at York University in Toronto, where she worked on the mathematical modeling of infectious diseases and epidemiology. Bourouiba received her Ph.D. from McGill University in 2008. Her doctoral research focused on the theoretical and numerical study of rotating homogeneous turbulence in geophysical flows.

Assistant professor Benjamin Kocar is a biogeochemist who studies chemical, physical, and biological processes governing the cycling of elements in ecosystems. He uses laboratory experiments and advanced analytical methods to decipher the molecular-scale mechanisms controlling the fate of nutrients, contaminants, and other environmentally relevant chemicals. He then tests the relative importance of these various processes — such as microbially mediated and abiotic reactions; effects of physical structure; and redox processes — in soils, sediments, and natural waters using field-scale observations and reactive transport (mathematical) modeling. His analytical methods include so-called "synchrotron-based" techniques that employ extremely powerful X-rays to reveal an element’s atomic structure. Kocar is developing novel synchrotron X-ray methods to examine microbially mediated metal reduction in real time.

His most recent studies include examining the dominant biogeochemical processes responsible for uranium retention and fate in sediments underlying the Hanford Site in Washington state, where Cold War-era nuclear waste was discharged directly into soil and aquifer sediments. For this study, Kocar constructed novel flow cells that simulate contaminated groundwater flow through heterogeneous media; these cells were non-destructively examined for uranium chemistry and distribution using synchrotron techniques.

“Our approach facilitates a better understanding of the molecular-scale biogeochemical processes governing the long-term fate of uranium at legacy waste sites, and how these processes operate within structured soils and sediments,” Kocar says.

Kocar was previously a research scientist at the Stanford Synchrotron Radiation Lightsource, a laboratory funded by the U.S. Department of Energy, and before this, a postdoctoral fellow in the Department of Environmental Earth System Science at Stanford University. He received a BS in soil and environmental science and a BS in chemistry-biochemistry in 2000 and an MS in soil and environmental chemistry in 2002, all from Montana State University at Bozeman. He earned a PhD in geological and environmental sciences in 2008 from Stanford University. Kocar’s doctoral research on natural arsenic in Cambodian groundwater provided a detailed understanding of how arsenic was released from sediments into the water.