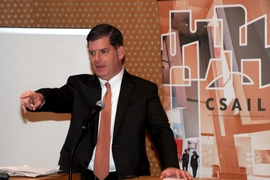 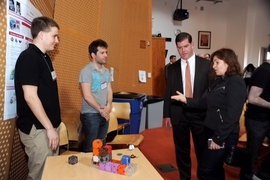 Taking place at the MIT Stata Center, the event showcased the latest artificial intelligence work at CSAIL, with a wide array of robots that can run, climb, swim and fly.

In attendance were students from two Boston technical public high schools — the John O’Bryant School of Math and Science in Roxbury and TechBoston Academy in Dorchester.

CSAIL researchers displayed a variety of projects, from robotic “M Blocks” that can self-assemble into different configurations a la “Transformers,” to 3D-scanning technology that allowed graduate student Ross Finman to make a photo-realistic image of Mayor Walsh in real-time.

Mayor Walsh and CSAIL Director Daniela Rus both spoke to the groups about the exciting and important real-world applications of the STEM fields (science, technology, engineering, and mathematics).

“MIT branching out to students in Boston Public Schools, and engaging them in immersive technology training programs, ultimately increases our city’s tech workforce,” said Mayor Walsh. “Through CSAIL, these students gain invaluable skills for jobs in a well-paying growing industry, and they thrive.”

“As more jobs require using computers in complex ways, we desperately need to address the knowledge gap in teaching our students the nuts and bolts of computer science,” Rus said. “I believe computer programming is as vital a subject as reading, writing and arithmetic for our children.”

During the day, students played ping pong against a robot, sat in a self-driving wheelchair, and learned about CSAIL’s printable “Segway” bot that can be created in five steps for only $20. They saw a flying robot that can perch on a wire, a soft underwater robot that can swim like a real fish, and a 330-pound disaster-relief robot named Atlas that is being developed for a special competition organized by the Department of Defense’s research arm.

“My students read about some of these projects at CSAIL, and before they arrived at the Stata Center there was a lot of skepticism that these things were even possible,” said Leo Gomez, a science teacher at TechBoston Academy. “The trip made what they’ve learned real and relevant. My kids don’t get a lot of opportunities like this, which makes it all the more impactful for them.”

This spring CSAIL is commemorating 50 years of computer science research at MIT. The lab had its roots in “Project MAC,” an initiative to develop make computers a public utility on par with heating or electricity. Project MAC led to the foundation of an official academic computer science curriculum at MIT, as well as MIT’s Laboratory for Computer Science (LCS) and Artificial Intelligence (AI) Lab, which then merged in 2003 to form CSAIL.