A pea-shooter for molecules 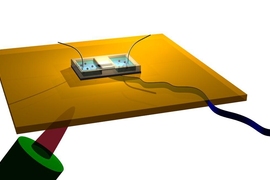 ↓ Download Image
Caption: A diagram of one of the group&#39;s experimental setups shows a copper plate
that can be heated using a torch underneath it, to study the effect of
temperature on the process. On top of the plate, an apparatus consisting
of two reservoirs separated by a silicon structure that has a single
carbon nanotube on top of it. When a power source is connected to the
electrodes (the wires extending up from the device), charged molecules
(ions) from one of the reservoirs can pass through the tube, and its
progress can be monitored using a scanning electron microscope.
Credits: Illustration courtesy of Choi et al.

Caption:
A diagram of one of the group&#39;s experimental setups shows a copper plate
that can be heated using a torch underneath it, to study the effect of
temperature on the process. On top of the plate, an apparatus consisting
of two reservoirs separated by a silicon structure that has a single
carbon nanotube on top of it. When a power source is connected to the
electrodes (the wires extending up from the device), charged molecules
(ions) from one of the reservoirs can pass through the tube, and its
progress can be monitored using a scanning electron microscope.
Credits:
Illustration courtesy of Choi et al.
Like a pea going through a straw, tiny molecules can pass through microscopic cylinders known as nanotubes. This could potentially be used to select molecules according to size — for example, to purify water by allowing water molecules to pass through while blocking salt or other substances.

Now, researchers at MIT, Seoul University in Korea and Ursinus College in Pennsylvania have found that such tubes are more selective than had been thought: Molecules of a precise size can zip through five times faster than those that are a bit smaller or larger. The new findings are published in the journal Nature Communications by MIT professor Michael Strano, graduate students Wonjoon Choi and Zachary Ulissi, and three others.

This size-dependence in nanotube transport was completely unexpected, says Strano, a professor of chemical engineering at MIT. “This work illustrates how transport in pores of this type remains exotic and relatively unexplored,” he says.

The team “looked at ion transport through the smallest single nanopores that have been studied,” Strano says. The carbon nanotubes they studied had widths ranging from 0.9 to 2 nanometers — about the diameter of a DNA helix — and were about 1 millimeter long.

“What we found was not predicted by theory,” he says: Up to a certain diameter, the flow of ions through a nanotube increased steadily — but then beyond that diameter, the flow decreased. “The dependence is a volcano-shaped plot,” Strano says.

The peak flow, at the center of that plot, allows transport that is five times greater than transport at smaller or larger diameters. “The experimental results are counterintuitive,” Strano says, “that there appears to be an optimal diameter.”

This size-dependence of transport could turn out to be useful in a variety of technologies, he suggests, including proton-exchange membrane (PEM) fuel cells, where molecules of oxygen or hydrogen must pass through tiny pores in a membrane to produce electricity. Another potential application is in DNA-sequencing devices, where DNA segments typically hurtle through pores much too quickly to be analyzed. The new understanding may provide a method for “tuning” the transit speed to slow the DNA sequences enough for analysis.

The unexpected size-dependence results from two phenomena, Strano suggests. According to a theory developed by the team, there is first an attractive force, in which ions’ electrical charge causes them to be pulled by an electric field through the pore. Since the ions and the tubes are all submerged in water, some water gets pulled along as well.

Up to a certain diameter, those water molecules form a layer, or a few layers, around the ion and are pulled along with it, the team theorizes. But as the opening gets bigger, the water behaves as a bulk material, slowing the ions’ passage. “This explanation is consistent with our experimental observations and molecular simulations of water inside of nanotubes of this type,” Strano says — though he stresses that while the data on the ion flow is clear-cut, additional theoretical work is needed to fully understand this process.

The finding may help in designing better membranes for desalination of water. The biggest problem with today’s membranes is the tradeoff between selectivity versus flow rates: Bigger pores let the water flow through faster, but are less selective. Nanotubes’ nonlinear response may provide a way around that.

“The results suggest that by using nanopores of a specific diameter, it may be possible to achieve maximum selectivity with maximum throughput” by optimizing the pore size, Strano says.

The work could also lead to new sensors capable of detecting specific contaminants in water, the team says. For example, arsenic contamination of groundwater is a serious health concern in some regions, but there is no reliable way of testing arsenic concentrations in water. The selectivity of nanotubes might make it possible to design a simple detector that could measure such contamination, Strano says.

Anand Jagota, a professor of chemical engineering at Lehigh University who was not involved in this work, says the team’s research “reveals new phenomena such as counterintuitive and nonmonotonic diameter dependence and ion-type dependence. The field really needs experimental studies like this one since there have been more theory and simulation papers than experiments.”

Jason Holt, president of Heliotrope Technologies in Berkeley, Calif., says the researchers “have developed an impressive experimental capability in single-nanotube devices … that will be of tremendous use to the community.” He says these findings “may aid in the design of highly selective filters that could find application in sensors or next-generation membranes.”

In addition to Choi and Ulissi, the work was carried out by MIT graduate students Steven Shimizu and Darin Bellisario, as well as Mark Ellison of Ursinus. The work was supported by the U.S. Department of Energy and Department of Defense.