The surprising story of Mongolian shamanism 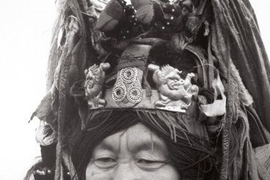 Caption:
Cover of "Tragic Spirits" (University of Chicago Press)
In 1990, as the Soviet Union was disintegrating, Mongolia, long a satellite of the U.S.S.R., regained its independence. Socialism was out and free markets returned. Religion — in the form of Buddhism, shamanism, and other folk religions — became officially accepted again in Mongolian society. That, in turn, produced another unexpected change: The return of shamans, religious figures who claim to have a supernatural ability to connect with the souls of the dead.

Indeed, as MIT anthropologist Manduhai Buyandelger chronicles in a new book, the revival of shamanism has shaped Mongolia in surprising ways in the last two decades. From storefronts in Ulan Bator, the nation’s capital, to homes in rural Mongolia, shamanism has become a growth industry.

In the book — “Tragic Spirits,” published this month by the University of Chicago Press — Buyandelger both documents this surprising phenomenon and analyzes its meaning. The return of shamanism, she asserts, represents more than the straightforward return of a once-banned religion to Mongolia. And it is more than just a convenient method for people to earn a little income by working as shamans.

Rather, she says, shamanism became more popular precisely because, in a poor country recovering from Soviet domination — where Mongolia’s occupiers had wiped away its records and the physical traces of its past — shamanic practices have offered some Mongolians a way to reinvent their own history. Shamans offer clients the supposed opportunity to meet with the spirits of their distant ancestors and hear “fragmented stories about their lives in the past,” as Buyandelger observes.

“Shamanism is a historical memory for people who lost parts of their ancestral homeland, and who had been marginalized and politically oppressed,” adds Buyandelger, an associate professor of anthropology at MIT. It flourishes, she notes, where people have “no museums, no libraries, no cemeteries, no mausoleums. They don’t have anything to materialize their memories of the past.”

‘I wanted to … understand it, and capture it’

A native of Mongolia herself, Buyandelger’s project grew out of a desire to study and write about the thrills, disorder, and uncertainty that emerged in post-Soviet Mongolia.

“It was complete chaos, and an exciting time,” Buyandelger says. “I wanted to write about it and understand it, and capture it.” Having already learned Russian, she started studying English out of a desire to write about Mongolia for the widest audience possible.

Meanwhile, in those first heady years of the 1990s, with religion tolerated again and Mongolians having to carve out their livings outside the socialist state system, shamanism suddenly flourished: “Religious practitioners proliferated like mushrooms,” Buyandelger says. “Astrologers, fortune tellers, shamans, monks were everywhere, from the bus stations to homes, and monasteries were reviving and opening up.”

To be clear, shamanism never disappeared entirely from Mongolia, as Buyandelger explains in the book; even while officially banned, underground shamanism persisted, often practiced by women in rural areas. However, the official repression of religion had created an “aura of mystery” around shamanism, as Buyandelger says, which helped it grow quickly again in the 1990s. That growth was also due to a symbiosis among shamans and clients: Becoming a shaman was a way of having a job, while going to a shaman was, in part, a way of finding reassurance at a time when, for many people, “the future had fallen apart.”

Buyandelger, who grew up in Ulan Bator, focused in her book on 18 months of fieldwork she conducted, largely with ethnic Buryat nomads in Dornod province, the easternmost part of Mongolia. The village of Bayan-Uul, where Buyandelger based her work, has a population of about 5,000 people.

In Dornod province, she noticed something deeper underlying the shamanism revival. Shamanism, after all, promises communication with the past — and in the Dornod area, which is particularly close to Russia, Soviet erasure of Buryat history was especially harsh. So shamanism quickly became a way of inventing, or trying to recreate, a past that had otherwise completely vanished.

“People knew they had forgotten their past,” Buyandelger says. “So they turned to a past that was embodied by the spirits of ancestors. Instead of thinking about the past in terms of years or periods, shamanic rituals teach people to think in terms of historical personas.”

Shamans themselves, as Buyandelger puts it, are “cultural bricoleurs” who “make memories out of generic stories and make histories out of knowledge that they collect throughout their practice.” Indeed, she notes, the Mongolian word for history, tuukh, means “to collect.”

The book has been well-received by other scholars; Paul Stoller, an anthropologist at West Chester University who has read the book, calls it “a memorable evocation of the human condition as well as a powerful exercise in social analysis.”

In the book, Buyandelger also uncovers some more subtle dynamics explaining the phenomenon of shamanism today. Women, while a minority of practitioners, constituted a much larger portion of those who tried to engage in shamanism during the Soviet era, as she relates in the book. “Female shamans, as women, were not necessarily regarded as doing anything harmful,” Buyandelger says, “whereas male shamans were under the gaze of the state.”

Moreover, a popular need to learn more about the past helps shamanism thrive now, precisely because clients have tended to try out a variety of shamans in the search for the one who can connect with the past in the most satisfactory and compelling way. A successful shaman, Buyandelger notes, brings spirits alive to clients as “verbal memorials,” which, taken together, comprise history for some Mongolians.

“People don’t have genealogical records, and you have shamans who don’t know exactly how to conduct themselves, so everything is a trial,” Buyandelger says. “Shamanism proliferates today not because people necessarily believe it 100 percent, but because people are trying to test it, and find out the most authentic practices they can trust. The more skeptical people seeking out shamans, in some ways, have become the most active catalysts of this proliferation.”