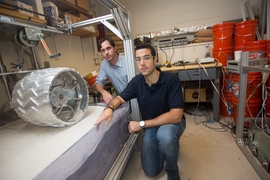 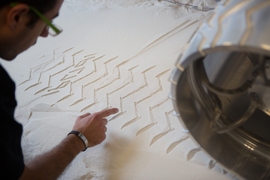 ↓ Download Image
Caption: The team estimated soil properties on Mars based on a variety of data sources, and then coupled that data with properties of the rover to develop a model to predict the likelihood and extent to which a rover may sink into a given terrain.

Caption:
The team estimated soil properties on Mars based on a variety of data sources, and then coupled that data with properties of the rover to develop a model to predict the likelihood and extent to which a rover may sink into a given terrain.

In May 2009, the Mars rover Spirit cracked through a crusty layer of Martian topsoil, sinking into softer underlying sand. The unexpected sand trap permanently mired the vehicle, despite months of remote maneuvering by NASA engineers to attempt to free the rover.

The mission mishap may have been prevented, says MIT’s Karl Iagnemma, by a better understanding of terramechanics — the interaction between vehicles and deformable terrain. Iagnemma says scientists have a pretty good understanding of how soils interact with vehicles that weigh more than 2,000 pounds. But for smaller, lighter vehicles like the Mars rovers, the situation is murkier.

“There’s a lot of knowledge in civil engineering about how soils will react when subjected to heavy loads,” says Iagnemma, who is a principal investigator in the Laboratory for Manufacturing and Productivity. “When you take lightweight vehicles and granular soils of varying composition, it’s a very complex modeling process.”

Now Iagnemma and researchers from Washington University in St. Louis and the Jet Propulsion Laboratory (JPL) in Pasadena, Calif., have developed a model called Artemis that accurately simulates rover mobility over various types of soil and terrain.

The model works much like a video game: A user plugs in commands to, for example, move the simulated rover forward a certain distance — instructions similar to those that NASA engineers give to rovers on Mars. The simulation then predicts how the rover will move, based on the underlying soil properties, vehicle characteristics and a terrain’s incline.

The team tested the model against observations in the field, including actual drive paths from previous Mars rovers, and found that the simulations behaved much like actual rovers in various terrains. The researchers also performed experiments in the lab, rolling a replica of a Mars rover’s wheel over Martian-like sand. The tests established relationships between wheel dynamics and soil properties — information that the team used to further refine the model.

“Once you have a model you trust that is really representative of how the rover behaves, it can help mission planners make path plans in a safer way,” says team member Carmine Senatore, who is a research scientist in the Laboratory for Manufacturing and Productivity. “It could say that this path looks shorter and faster, but if the soil is not what we expected, it may be much more dangerous, so it’s better to go another way.”

Senatore, Iagnemma, Raymond Arvidson of Washington University, and collaborators will outline the details of the model in a paper to appear in the Journal of Field Robotics.

Researchers show and explain how their new model's mobility can easily travel of various types of soil and terrain.

For the most part, the terrain over which Mars rovers travel — including the most recent Curiosity mission — is relatively benign, consisting mostly of flat, firm surfaces. But occasionally, rovers encounter more challenging environments, such as steep dunes covered in fine, loose soil.

“Think about the difference between beach sand, which you can walk on and even play volleyball on, and cake flour,” Iagnemma says. “The reason [for that difference] goes down to the microscale of the material.”

To know how much work is required for a rover to get over a dune, Iagnemma says one needs to understand the properties of an environment’s soil. To develop its model, the team estimated soil properties on Mars based on a variety of data sources, including measurements of the planet by orbiting sensors and images from the rovers themselves, as well as data on the amount of torque required to drive a wheel through a particular type of terrain.

The team coupled Martian soil data with properties of the rover, such as its size and weight, and developed a model to predict the likelihood and extent to which a rover may sink into a given terrain.

Iagnemma and Senatore refined the model with experiments in the lab. The researchers set up a bed of both coarse and fine soil, similar to sediment that has been observed on Mars. They built a straight track overhead, and attached a spare wheel from the Mars rover Opportunity. Powering the wheel with a motor, the team observed the wheel’s performance, noting how much the wheel sank into the soil, and the amount of torque needed to overcome sinking.

“Sometimes in a car you end up doing things like rocking it back and forth,” Iagnemma says. “There’s limited strategies for a Mars rover because it’s not a very dynamic vehicle, and moves very slowly. So we have to be more creative and develop strategies to get out.”

On the dunes of escape

To test the model against real-world scenarios, scientists from Washington University and JPL performed tests of roverlike vehicles in the Mohave Desert’s Dumont Dunes. The researchers drove the vehicle over multiple locations, and measured the extent of sinking by analyzing images taken of wheel tracks. The model, simulating the same soil and vehicle conditions, produced very similar driving patterns.

Along the same lines, the researchers analyzed images taken by the rover Opportunity of its own wheel tracks on Mars. In particular, the team studied the rover’s path as it crossed a ripple of sand in a region called Meridiani Planum, just south of the planet’s equator. The model accurately reproduced the vehicle’s behavior as it climbed over small dunes, making its way across the sandy ripple.

The group’s model may be especially useful in helping a rover get out of a tight situation, says John Callas, project manager for NASA’s Mars Exploration Rover at JPL.

“The rover Opportunity may require such assessments when considering steep ascents up the rim of Endeavour Crater, or for the rover Curiosity as it considers the ascent up Mount Sharp in Gale Crater,” says Callas, who did not participate in the research. “The highest benefit from Artemis might likely come from application to an anomalous condition, like an unexpected embedding of the rover. … Artemis is another important tool to support the successful robotic exploration of the surface of Mars.”

Iagnemma says that going forward, Artemis may be used to help planners chart the safest routes for the rover Curiosity, which is expected to traverse more challenging topography in the future.

“There are goals for taking the rover into places that are more difficult to travel, like dunes and steep slopes,” Iagnemma says. “That time hasn’t really been reached yet, so there’s a little time to get the model refined for Curiosity.”