A physicist, an athlete, and an engineer

Studying both physics and nuclear science and engineering at MIT is no small challenge, but it’s just one of the activities that senior Margo Batie juggles. During her time at MIT, Batie has played on the varsity basketball team, led the women’s club rugby team, conducted research at two national laboratories, and helped strengthen minority support systems and outreach programs.

Born and raised in South Central Los Angeles, Batie was encouraged to pursue engineering by her father, an educator and entrepreneur. “He started an Internet service providing company, so I ran around with him and helped him fix computers when I was younger,” Batie remembers. On weekends in elementary school, she would practice typing and arithmetic, surprising her teacher and classmates when she sped through both in classroom exercises.

In high school, Batie excelled both on the field and in the classroom, playing three varsity sports and graduating second in her class. In spring of her senior year, Batie was leaning toward staying in California for college — before she visited MIT for a few days that April along with throngs of other prospective freshmen at Campus Preview Weekend (CPW).

“Four days later, at the end of CPW, I thought, ‘I’m coming here,’” Batie says. “It was just overwhelming how much the school had to offer, and I fell in love with the campus.”

Batie has excelled at MIT, but the transition wasn’t always easy. “Crenshaw High School was 60 percent black, 40 percent Hispanic,” she says, adding that MIT “was a culture shock, initially.”

MIT’s minority student groups helped ease her transition. Since her arrival, Batie has become involved with the National Society of Black Engineers and with the Black Students Union (BSU) as that group’s executive secretary.

“MIT’s diversity is actually, percentagewise, one of the highest of the upper-tier institutions in the U.S., but being a minority at MIT is a lot more difficult than people would think,” Batie says. “People need a support system. And one of the things people first see, and connect with each other over, is race and cultural background, so having something like the BSU that starts with that — but doesn’t end with it — is a really big deal.”

Batie has also worked to strengthen support systems for minority students outside of MIT’s undergraduate community. The summer after her freshman year, Batie helped teach and advise minority high school students at the University of California at Berkeley’s Summer Math and Science Honors Program. “Being there and seeing people who were close to my age who just needed that little extra motivation, who just needed someone to look up to who looks like them, who’s where they want to be — it was really rewarding,” Batie says. Last summer, she continued her efforts as a teaching assistant for CORE, a math program for high school students run by MIT’s Office of Engineering Outreach.

On campus, Batie has found another supportive community in the women’s club rugby team, which she has led as president for the past year. “I really fell in love with the team here,” Batie says. “Being able to lead such a tenacious group of young women is a tremendous honor.”

As president of a club sport, Batie plans for every aspect of practices and games. “It can get really overwhelming, but then once you get on the field — well, that makes it all worth it,” she says. 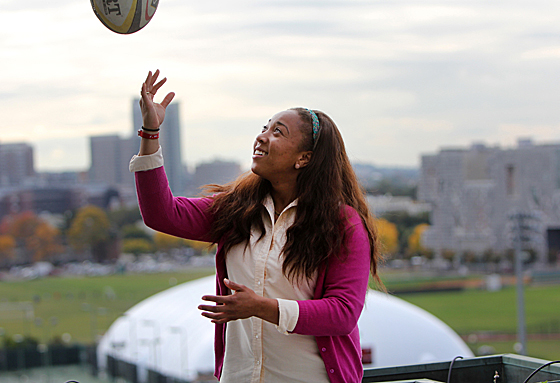 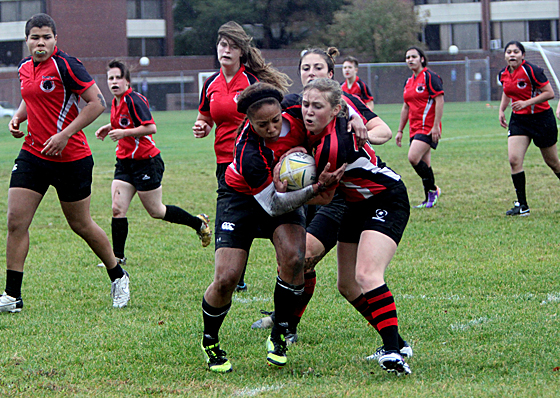 Batie sees collisions aplenty on the rugby field, but she has also had the chance to work with researchers studying collisions many orders of magnitude smaller.

As an intern at Fermilab the summer after her sophomore year, Batie helped design part of a linear accelerator designed to produce muons — elementary particles with the same charge as electrons, but with 200 times the mass.

“Muons are really elusive and hard to study,” Batie explains. “In order to produce them, they needed a certain type of electromagnetic field to accelerate protons and collide them into a beryllium source; one of the byproducts of the collision is muons.”

Batie worked on a component of the accelerator called the radio frequency (RF) cavity. The RF cavity uses capacitors — parallel metal plates with opposite charges — to create an electromagnetic field that controls the number and path of the protons.

“They wanted a couple billion in a certain timespan, and using the RF cavity, you could get them in certain size pulses to be able to bombard the target and create muons,” Batie says.

Last summer, Batie worked as an intern at Brookhaven National Laboratory, where she continued to work on particle collisions as part of the STAR experiment. “The STAR experiment was basically colliding gold particles at really, really high velocities to study quarks,” Batie says.

Batie was tasked with testing and optimizing the signal from a new component of the detector. “The STAR detector is almost three-and-a-half stories high, with many wires coming out of it,” Batie describes. “The longer a signal travels through the wires, the more distortion there is, so we want to make sure we’re getting the most optimal pulse at the site of the interaction. That’s what my job was: to make sure that we get the best pulse so that we can get the best possible data.”

After she graduates, Batie hopes to pursue a PhD in nuclear engineering, taking her background in the more theoretical aspects of physics and applying it to a field that inspires her: nuclear power.

“Whatever I do, I want it to directly benefit people,” Batie says. “Being able to apply what I learned and then fuel a city — that’s awesome to me.”