Starting up — again and again

Caption:
Danny Castonguay
Credits:
Photo: Allegra Boverman
For many people, it takes a few semesters in college, or a few years at a job, to figure out what they want to achieve. For others, their goals and aspirations are clear early on.

Danny Castonguay, a second-year MBA student at the MIT Sloan School of Management, falls into the latter category.

“I’ve known for a long time that I wanted to be the CEO of my own company,” Castonguay says. “My father started a company and purchased two rental buildings with 72 units when I was young. He made sure to remind me of the importance of hard work as I was growing up.” 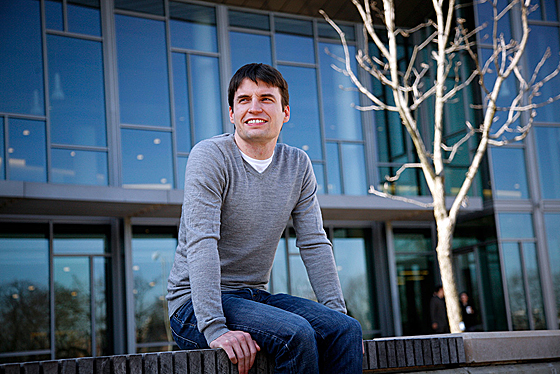 A native of Montreal, Castonguay received his undergraduate degree, as well as a master’s degree in computer engineering, from McGill University. But knowing that he wanted a managerial role, he then joined McKinsey and Company, a prominent management-consulting firm that deals with many Fortune 500 companies, where he worked as a consultant for three years.

But even as Castonguay gained useful on-the-job training, he still wanted to “shortcut the process a bit” — so, while still working as a consultant, he started AntPortal, a company that creates software to enhance productivity within businesses.

“It’s particularly useful for companies that do heavy amounts of research in Canada,” Castonguay says. “We created a tool that accounts for cost and documents their research and development efforts.”

These days, Castonguay is involved with SkillNova, a second company he helped found a year ago, while on a Google-sponsored trip to the Philippines.

“After my first year at MIT, I wanted to get back into entrepreneurship and do something different than AntPortal,” Castonguay says. So as a Legatum Fellow and as part of MIT’s Accelerating Information Technology Innovation program, Castonguay went to the University of the Philippines, where he taught web and mobile development and entrepreneurship to students whom he describes as having “excellent technical skills, but little sense of entrepreneurship.” In the process, Castonguay saw the need for a mechanism to help direct students’ skills in a way that would aid the local economy and help alleviate some of the country’s problems.

At the same time, Castonguay tried to launch a venture called SMART Coops, a company aimed at providing “sustainable management of agricultural resources and trade for farmers in the Philippines.” While trying to raise money for SMART Coops, Castonguay met Paul Rivera, an entrepreneur with an idea for changing how training and recruiting is done for entry-level, white-collar jobs, starting in the Philippines.

“I joined Paul, and together we entered a premier incubator program that takes select startup companies and provides them with advice and the know-how to become successful,” Castonguay says.

“We raised $750,000 in the fall,” Castonguay says, “and we are getting ready to do another round.” He takes pride in having grown the company from “a dozen people last summer to over 20 people now,” he adds.

He is particularly grateful to his MIT Sloan advisor, Tauhid Zaman, an assistant professor of operations management. According to Castonguay, Zaman has provided insights that have guided SkillNova’s acquisitions strategy, and has helped pull data on how the company’s customer base is growing via Facebook.

“Beyond advice, he’s actually giving actual computer code for us to use,” Castonguay says, “and he’s using it in his research in digital-marketing analytics, so it’s a symbiotic relationship.”

SkillNova has actually become a case study in several of Castonguay’s classes at MIT. “More than 20 students here have helped improve the company,” he says. “We have used the company as the topic for a market branding course as well as for a pricing course.”

Throwing ideas at the world

After graduating with his MBA later this week, Castonguay is moving to Manila to continue SkillNova’s efforts to provide online education to Filipinos and connect large multinationals with the talent available in the Philippines.

“Our primary focus is outsourcing jobs to people in Manila: These people come to us and we have an online curriculum that helps train them to hold the jobs that multinational companies are looking to fill” — primarily jobs in customer service and back-office services, Castonguay says.

“It’s really hard to find good talent for these jobs,” he adds, “and there aren’t open jobs for the degrees that Filipinos are pursuing. So we are helping bridge the gap between having a degree and making a livelihood.”

Beyond SkillNova and AntPortal, “I would like to know what it’s like to be the CEO of a 300-person company,” Castonguay says, “but I’m not sure I am ready to handle the politics and time it takes to work up that kind of ladder.” He keeps a journal of ideas for new ventures — many of which stem from “things that annoy me,” he says.

Castonguay is sure that if presented with a pot of money, he would use it to start several companies. “It’s all I know how to do,” he admits, “and I love to throw my ideas at the world. I learn from my failures but I also know that my life is too short to implement all my ideas.”