Buckling up to turn 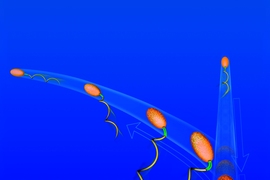 ↓ Download Image
Caption: Motile marine bacteria exploit a buckling instability of the flexible hook (green) at the base of their flagellum (yellow) to change swimming direction, turning what is otherwise a structural failure into a fundamental biological function.

Caption:
Motile marine bacteria exploit a buckling instability of the flexible hook (green) at the base of their flagellum (yellow) to change swimming direction, turning what is otherwise a structural failure into a fundamental biological function.

Credits:
Graphic: Kwangmin Son, Jeffrey Guasto, Glynn Gorick and Roman Stocker
Bacteria swim by rotating the helical, hairlike flagella that extend from their unicellular bodies. Some bacteria, including the Escherichia coli (E. coli) living in the human gut, have multiple flagella that rotate as a bundle to move the cell forward. These cells turn somewhat acrobatically by unbundling their flagella, causing the cell to tumble, reorient and strike out in another direction.

But many microbes, including 90 percent of motile marine bacteria, have only a single rigid flagellum; they are able to swim both forward and backward by rotating this flagellum either counterclockwise or clockwise. These microbes change direction with a sideways “flick” of their lone flagellum — a flick first documented in 2011 as a unique swimming stroke whose mechanism has remained a mystery.

Now, using high-speed video to record individual swimming bacteria at up to 1,000 frames per second, researchers at MIT have seen that the flick occurs when the so-called “hook,” a small flexible rod connecting the flagellum to the cell’s internal motor, buckles during forward swims. The drag on the cell head caused by the water’s resistance combines with the opposing thrust force from the rotating flagellum to compress the hook, causing it to buckle and flick the cell into a 90-degree reorientation, the researchers say in a paper published online July 7 in Nature Physics. The ability to reorient by flicking ultimately helps bacteria make their way toward food in the nutrient-sparse ocean.

This might seem like an awkward means of navigation. But when you consider that marine bacteria can swim at nearly 100 body lengths per second — the equivalent of a car traveling 900 mph, faster than the speed of sound — and the flagellum spins at more than 1,000 revolutions per second, the 10-millisecond buckling of the hook seems a little more spectacular. The mechanism is of particular interest to engineers, who traditionally focus on the prevention of buckling to avoid failure in structures.

“The bacteria have evolved to exploit this structural failure as a strategy,” says lead author Roman Stocker, an associate professor in MIT’s Department of Civil and Environmental Engineering, whose research focuses on the ecology and biophysics of ocean microbes. “E. coli and other multiflagellated microbes have to synthesize and maintain all those flagella. But marine bacteria are able to achieve the same functionality with just one flagellum by turning physics on its head. It’s controlled failure.”

Stocker’s co-authors on the paper are graduate student Kwangmin Son and postdoc Jeffrey Guasto. Their research was funded by the National Science Foundation.

Understanding how marine microbes use controlled failure to change swimming direction is useful in its own right: Despite their small size, marine microorganisms are at the base of the ocean food chain, and can cause red tides, decimate coral reefs or clean up oil spills. But this work also may have future applications in soft robotics or bioengineered systems for drug delivery.

“A single actuator, the flagellum, enables both propulsion and turning in these bacteria,” Guasto says. “This is a well-known principle in robotics called ‘underactuation,’ but it is rarely considered at the micrometer scale.”

Stocker attributes the insight that buckling is the mechanism responsible for the flick to the “engineering bias” stemming from the team’s knowledge of mechanics: “When our high-speed imaging showed that flicks only occurred during forward motion, we intuited that this implied compression, and thus the potential for buckling.” But the key to discovering the mechanism was in the high spatial and temporal resolution of the imaging technology, he says.

The researchers studied the swimming patterns of the bacterium Vibrio alginolyticus by tracking individual cells and saw that the microbe executes a sort of three-point turn consisting of a backward swim, a brief forward swim lasting only 10 milliseconds, and then the 90-degree flick to a new direction caused by the buckling of the hook. After the flick, when the bacteria swim at a steady speed, the hook twists up and becomes stiffer, and flicking does not occur.

To test their hypothesis that compression was responsible for the flicking process, Son and Guasto altered the concentration of sodium ions in the water. Because a sodium ion pump drives the cell’s motor, decreasing the salt content slows the microbes, and thus decreases compressive forces on the hook, preventing the flick.

Altogether they studied the trajectories of more than 17,000 bacteria, including a coral pathogen and a mixed community of microbes from the Atlantic Ocean. All displayed the same swimming pattern, leading to the conclusion that this remarkable maneuver is a common means of reorientation for marine microbes.

“At first blush, one might think that a single polar flagellum is a more economical design than multiple … flagella, especially since flagellar bundles are not very efficient,” Howard Berg, the Herchel Smith Professor of Physics and professor of molecular and cellular biology at Harvard University, writes in an analysis published in the same issue of Nature Physics. “But most of the costs in this business are in the construction, not in the operation. Presumably, it’s cheaper to place motors at random positions along the cell wall than it is to mount them on a specific platform at one pole. One benefit of the polar design might be enhanced swimming speeds; one cost a more constrained search paradigm. Nature appears to have stumbled upon a solution to the latter problem: a flick triggered by a buckling instability.”

“The buckling of the hook of these bacteria is one of the smallest examples in nature of structural failure turned into biological function, and it is a pervasive strategy in the ocean,” says Son, who is the paper’s first author.

“Above all, we have remained astonished throughout this project at the resourcefulness of these smallest of all organisms,” Stocker adds.