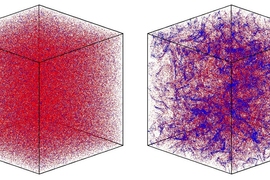 Caption:
These images from a computer simulation show nonmotile cells in turbulence in the cube on the left and motile cells at right.
Credits:
Images: W. M. Durham, E. Climent, M. Barry, F. De Lillo, G. Boffetta, M. Cencini and R. Stocker
Tiny ocean plants, or phytoplankton, were long thought to be passive drifters in the sea — unable to defy even the weakest currents, or travel by their own volition. In recent decades, research has shown that many species of these unicellular microorganisms can swim, and do so to optimize light exposure, avoid predators or move closer to others of their kind.

Now scientists at MIT and Oxford University have shown that the motility of phytoplankton also helps them determine their fate in ocean turbulence. Rather than acting to distribute them evenly — as physics would demand of small particles mixed into a fluid — the individual vortices that make up ocean turbulence are like social mixers for phytoplankton, bringing similar cells into close proximity, potentially enhancing sexual reproduction and other ecologically desirable activities.

In a paper appearing online July 15 in Nature Communications, William Durham of Oxford, Roman Stocker of MIT and co-authors describe how at the scale of millimeters, phytoplankton caught in a watery vortex form highly concentrated patches at the center of the swirl. In the turbulent ocean where short-lived vortices form continually, this process repeats itself, carrying the microorganisms from social mixer to social mixer.

The findings are counterintuitive because turbulence is the most expedient means of mixing two substances (imagine stirring milk into coffee). If they were unable to swim, microorganisms exposed to a sea of vortices would form a homogenous distribution in the water. Instead, the study shows that the turbulence causes the phytoplankton to form concentrated patches.

Phytoplankton swimming in turbulent ocean waters form highly concentrated patches at the centers of the individual vortices that make up the turbulence. Because the vortices are short lived, the effect is to carry the microorganisms from social mixer to social mixer. Video: W. M. Durham, E. Climent, M. Barry, F. De Lillo, G. Boffetta, M. Cencini and R. Stocker

“Based on our intuition of turbulence and turbulent mixing, we expected homogeneity to reign,” says Stocker, an associate professor of civil and environmental engineering who led the study. “Instead, the phytoplankton surprised us by forming highly concentrated clusters of cells — it’s turbulent un-mixing. For the phytoplankton, this is a vehicle to effectively find cells of the same species without any sensory information on each other’s location or the need to invest in costly means of chemical communication.”

But patchiness can also have a downside: Phytoplankton, the photosynthetic microbes of the sea, form the base of the ocean food web. Clusters of cells can become easy prey to zooplankton predators that home in on clusters of phytoplankton. And close proximity to like cells can increase competition among the microorganisms for sparse nutrients.

“While patchiness increases the chance of a fatal encounter with a predator, it also increases the chance of finding other phytoplankton cells, which is needed to form resilient cysts that can survive harsh winter conditions,” says Durham, the paper’s first author and a lecturer at Oxford University who began working on this study as a doctoral student at MIT. “This mechanism suggests phytoplankton might tune their motility to have the best of both worlds, minimizing patchiness when there are a lot of predators around while maximizing patchiness when the time is ripe for cyst formation.”

The research team — which includes MIT graduate student Michael Barry, Eric Climent of the University of Toulouse, Filippo De Lillo and Guido Boffetta of the University of Torino and Massimo Cencini of the National Research Center of Italy — first performed experiments using phytoplankton in the lab, then extended their observations to a turbulent ocean with high-resolution simulations performed on a supercomputer.

For the experiments, a transparent box shaped like the letter H formed a simplified version of the ocean, with seawater flowing upward through the vertical bars, creating two inner-directed vortices within the horizontal bar. When the researchers added Heterosigma akashiwo (a motile, red-tide-forming species known for its ability to kill fish), the microorganisms formed dense patches at the centers of the swirls. To single out the role of motility, the researchers repeated the experiment with dead microorganisms, which the turbulence distributed uniformly.

The computer simulation mimicked ocean turbulence on a larger scale, with more than 3 million phytoplankton and many interacting vortices forming at the smallest possible scale of turbulence. It found that patchiness increased more than tenfold when the phytoplankton swam. And as their speed increased, so did the patchiness, leading to the conjecture that over evolutionary timescales, the microorganisms might possibly have developed the ability to actively adjust their swimming speed to modulate interactions with others of the same species and with predators.

“I think that this work opens up a whole spectrum of fascinating evolutionary questions,” says Simon Levin, the George M. Moffett Professor of Biology at Princeton University. Motility in turbulence “is an emergent property of selection for behaviors that lead to aggregation. Of course, aggregation might be a byproduct rather than the goal, in the sense that organisms are converging in their behaviors to what is individually optimal. But the idea that this might evolve because individuals do better in aggregations — because of reproduction, resource-capture or safety in numbers from consumers — is a really intriguing one.”

“Life is turbulent in the vast expanses of the ocean — and it’s fascinating to learn how some of the most important organisms on our planet fare and behave in their daily turbulent lives,” Stocker adds.

The work was funded by the Human Frontier Science Program, the National Science Foundation and the MIT MISTI-France Program.