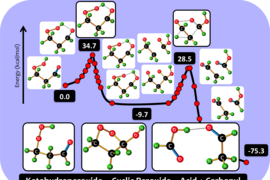 ↓ Download Image
Caption: Diagram illustrates the newly-discovered reaction that transforms molecules of ketohydroperoxide into acids and carbonyl molecules, after going through intermediate stages.

Caption:
Diagram illustrates the newly-discovered reaction that transforms molecules of ketohydroperoxide into acids and carbonyl molecules, after going through intermediate stages.

Credits:
Illustration courtesy of Jalan et al
In all the centuries that humans have studied chemical reactions, just 36 basic types of reactions have been found. Now, thanks to the work of researchers at MIT and the University of Minnesota, a 37th type of reaction can be added to the list.

The newly explained reaction — whose basic outlines had been known for three decades, but whose workings had never been understood in detail — is an important part of atmospheric reactions that lead to the formation of climate-affecting aerosols; biochemical reactions that may be important for human physiology; and combustion reactions in engines.

The new analysis is explained in a paper by MIT graduate student Amrit Jalan, chemical engineering professor William Green, and six other researchers, published in the Journal of the American Chemical Society.

Stephen Klippenstein, a senior scientist at the Argonne National Laboratory in Illinois who was not involved in this research, says, “I think this may be the best paper I have read this year. It uses a multitude of theoretical methods … to explore multiple aspects of a novel discovery that has important ramifications in atmospheric chemistry, combustion kinetics and biology.”

The reaction’s details sound esoteric: a low-temperature oxidation that results in the decomposition of complex organic molecules known as gamma-ketohydroperoxides. When he first described the reaction in the scientific literature 30 years ago, Stefan Korcek of the Ford Motor Company proposed a hypothesis for how the reaction might take place. The new work shows that Korcek had the right concept, although some details differ from his predictions.

The original discovery was the result of analyzing how engine oils break down through oxidation — part of an attempt to produce oils that would last longer. That’s important, Green points out, since waste oil is among the largest hazardous waste streams in the United States.

In analyzing the problem, Korcek realized that “there were fundamental things about the way even simple hydrocarbons react with oxygen that we didn’t understand,” Green says. By examining the products of the reaction, which included carboxylic acids and ketones, Korcek outlined an unusually complex multipart reaction. But for the next three decades, nobody found a way to verify whether the reaction or the steps he outlined could work.

Jalan says that the MIT researchers’ analysis came about almost by accident. “I was looking at that paper for a different study,” he says, “and I came across [Korcek’s] work, which hadn’t been verified either theoretically or experimentally. … [We] decided to see if we could explain his observations by throwing quantum mechanical tools at the problem.”

In collaboration with the Minnesota researchers — including Donald Truhlar, a co-author of the new paper and a leading expert in such calculations — Jalan and Green were able to demonstrate exactly why the reaction works as it does. But they also found that part of the process must differ slightly from Korcek’s original hypothesis.

Green says that understanding how this “very important reaction” works could be significant in several fields. The researchers’ initial impetus was, in part, a colleague’s exploration of biofuel combustion. The new understanding of the degradation that can take place as different fuels oxidize — sometimes producing toxic or corrosive byproducts — could help narrow the choice of fuel types to pursue, he says.

The process is also related to oxidations that take place in the body, contributing to the tissue damage and aging that antioxidant vitamins seek to combat, Green says.

“It’s very odd to have so many reactions at once in such a small molecule,” Green adds. “Now that we know that can happen, we’re searching for other cases.”

Anthony Dean, dean of the College of Applied Science and Engineering at the Colorado School of Mines, who was not involved in this work, says, “A particularly nice aspect of this work is to then consider how this finding might be applicable to other systems. In a broader context, this combined effort by two very prominent research groups illustrates the power and potential for electronic structure calculations [in] quantitatively important problems in chemical kinetics.”

Klippenstein adds, “As a result of this clear exposition and the high level of theory that was applied, I believe this work will be widely accepted immediately. I certainly am already convinced by their conclusions.”

The research was supported in part by the U.S. Department of Energy, and used computing facilities at the Pacific Northwest National Laboratory and the Minnesota Supercomputing Institute.