Living in a material world 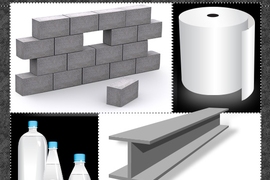 Credits:
Image: Christine Daniloff/MIT
A new report by researchers at MIT and elsewhere finds that the global manufacturing sector has made great strides in energy efficiency: The manufacturing of materials such as steel, cement, paper and aluminum has become increasingly streamlined, requiring far less energy than when these processes were first invented.

However, despite more energy-efficient manufacturing, the researchers found that such processes may be approaching their thermodynamic limits: There are increasingly limited options available to make them significantly more efficient. The result, the team observed, is that energy efficiency for many important processes in manufacturing is approaching a plateau.

The researchers looked at how materials manufacturing might meet the energy-reduction targets implied by the Intergovernmental Panel on Climate Change, which has suggested a 50 percent reduction in carbon-dioxide emissions by 2050 as a means of avoiding further climate change. Meanwhile, economists have estimated that global demand for materials will simultaneously double.

To reduce energy use by 50 percent while doubling the output of materials, the team — led by graduate student Sahil Sahni and Tim Gutowski, a professor of mechanical engineering at MIT — studied whether manufacturing processes could improve in efficiency by 75 percent. The researchers identified the five most energy-using materials produced, and outlined scenarios in which further energy may be saved in manufacturing. But even in the most aggressive scenario, the team found it was only able to reduce energy use by about 50 percent — far short of its 75 percent goal.

“What we’re saying is, when you look really big, at global targets for limiting climate change, we think this appears to be beyond what industry can do by itself,” says Gutowski, who leads MIT’s Environmentally Benign Manufacturing research group. “If industry can’t meet these goals, we may need bigger cuts in other sectors.”

The researchers published their results in the Philosophical Transactions of the Royal Society. Their co-authors are Julian Allwood and Michael Ashby, of Cambridge University, and Ernst Worrell of Utrecht University in the Netherlands.

Even an optimistic scenario is not enough

To assess the potential for energy reduction in manufacturing, Gutowski and his colleagues first identified the five materials whose production consumes the most energy. These materials — steel, cement, paper, plastics and aluminum — represent roughly half of energy used and more than half of carbon dioxide emitted in the manufacturing sector. The researchers then identified the most energy-intensive processes involved in manufacturing each of these materials, and looked for ways in which these processes might be made more efficient.

For example, the team looked for the best available technologies associated with materials manufacturing. According to Gutowski, “There is a distribution of how efficient these operations are around the world.” Some facilities may adopt the most efficient (and expensive) equipment, while others retain older, energy-inefficient processes.

“These are huge facilities, and very capital-intensive,” Gutowski says. “When you build one, you don’t want to scrap the whole thing and build a new one. So they stay in place for a long time.”

The researchers drew up an optimistic scenario in which every manufacturing facility adopts the best available technologies. The team disregarded cost — in reality, often a huge barrier to installing energy-efficient processes. Instead, the researchers looked for any solution that may improve energy efficiency by 75 percent — but found they were unable to reach even half of that value

The team then tried another tactic, looking to reduce energy-intensive processing through wider adoption of recycling; it requires far less energy to recycle a material than it does to manufacture it from scratch. However, they found limits in the supply of recyclable materials, particularly in developing countries that are growing at high rates.

In the end, the group found that the manufacturing sector as a whole would only be able to reduce its energy use by about 50 percent. A major constraint, Gutowski says, is the materials’ thermodynamic limit: the minimum energy required to manufacture a material from raw inputs. Manufacturers have already made great strides and the best available technologies are now approaching these limits, particularly for the five materials studied — making it difficult, and costly, to achieve further gains.

Making strides without hurting too much

Despite these limitations, Gutowski says these gains should be pursued and that there remain additional ways to reduce energy consumption. For example, materials can be made to last longer, or to serve more people. Both scenarios may serve to reduce demand, and hence energy use and carbon emissions.

John Sutherland, a professor of environmental and ecological engineering at Purdue University, sees the group’s results as a necessary reality check.

“Just trying to be more efficient in terms of manufacturing is not going to have the impact needed to meet the long-term energy-reduction goals,” says Sutherland, who did not participate in the research. “A fundamental paradigm change does offer promise, [such as] dematerialization — meeting needs through services rather than with material-intensive products.”

Gutowski says societal actions also play a part in reducing energy use. People may choose to carpool, or take the train, rather than driving their car to work — choices that would improve material efficiency from a broad perspective.

To date, he says, society hasn’t made as many improvements in energy efficiency as industry. The incentive for industry is to reduce costs; for society to make the same cuts in energy use, different incentives may be needed.

“I think the game is to get people to do this without it hurting too much,” Gutowski says. “If we put in place incentives, we could probably surprise ourselves at how we might be able to make great strides.”