Caption:
Illustration of the Kepler telescope space observatory that researchers are using to identify Earth-sized exoplanets.
Credits:
Image: Wendy Stenzel/NASA/Kepler mission
An international team of scientists has discovered a planetary system 1,200 light-years away that hosts two super-Earth-sized planets in its “habitable zone” — a region in which conditions are favorable for a planet’s surface to hold liquid water, and potentially life. The discovery was made after meticulous analyses of data from the Kepler telescope, a space observatory that trains its gaze on a wide swath of the sky to identify Earth-sized exoplanets. Josh Winn, the Class of 1942 Career Development Associate Professor of Physics at MIT, is among the researchers who made the discovery, published this week in the journal Science. Winn spoke with MIT News about the new planetary system, known as Kepler-62.

Q. What can you tell us about this planetary system? What similarities does it have to our own solar system?

A. This newly discovered system is home to at least five planets, all with sizes comparable to the Earth. Just as in the solar system, the planets’ orbits are likely to be aligned with one another, like grooves in a record. We are lucky enough from our vantage point on Earth to be viewing that record nearly exactly along its side, and can observe all the planets periodically eclipsing their star as they go around. That’s how the planets were discovered, and their sizes measured: by sensing the small drop in brightness when one of the planets passes in front of the star. The star is about 30 percent smaller than the sun, and illuminates the planets with less intense, redder starlight.

At the moment, our knowledge is limited to the diameters of the planets and their orbital distances. We don’t know what these planets are made of, although it is plausible that they are mainly rock and iron, similar to the Earth. We also don’t know what might be in their atmospheres, or on their surfaces. 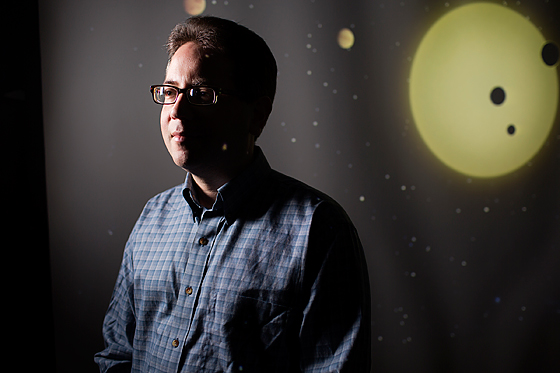 Q. The two outermost planets, Kepler 62e and 62f, appear to be within the habitable zone. What does this mean, and how likely could it be that life might exist on either planet?

A. The habitable zone is the range of distances from a star where the surface temperature of a planet could allow for liquid water, as opposed to vapor or ice. Since liquid water seems necessary for life on Earth, astronomers have taken a special interest in searching for rocky planets in the habitable zones of their parent stars. At the moment, the two outermost planets of Kepler-62 are the most secure examples of such planets. However, there is no guarantee that a planet is inhabited simply because its address is in the habitable zone. One need look no further than Venus or Mars, which are within the habitable zone according to some astronomers’ criteria, and seem to be devoid of both liquid water and life. We do not yet know all the factors that are crucial for life, or that prohibit life from arising.

Q. From a broader perspective, how close are we to finding a truly Earthlike planet, and if found, what would that mean for planetary exploration in general?

A. An “Earth twin” would have the same size and composition as the Earth, a similar type of atmosphere, and would orbit around a clone of the sun at the same distance that Earth does. This newest discovery from the Kepler mission takes us closer to that ideal, although the star is somewhat too small, and the planets are a little too large. It should only be a few more years before a planet of the proper size and orbit is found around a sunlike star. However, learning about the composition of the planet and its atmosphere will take longer. For practical reasons, the target stars of the Kepler mission are generally too faint and distant to study the atmosphere, even with our best telescopes. This situation will improve in the next decade, as astronomers begin systematically targeting brighter stars.

To figure out if a planet is actually inhabited, we will probably need to search for decisive evidence of metabolic activity in its atmosphere, or listen for messages from intelligent civilizations. This quest could take decades or more. Fortunately, nature has been kind enough to provide many fascinating and unexpected types of planetary systems that we are studying along the way.