The brains behind research on the brain

Caption:
Mehmet Fatih Yanik
Credits:
Photo: M. Scott Brauer
While studying physics and electrical engineering as an MIT undergraduate in the late 1990s, Mehmet Fatih Yanik managed to avoid taking any biology classes until his final semester, when he was forced to sign up for a course.

“I believed that biology was very boring, and just about memorizing facts,” he says.

So having no choice but to attend the course, Yanik sat at the back of the lecture hall, expecting the worst. But as time went on, he found he was getting more and more interested in the course, which was run by professor of biology Eric Lander, one of the leaders of the Human Genome Project and founding director of the Broad Institute. “I started to sit closer and closer to the front of the classroom,” he says.

By the end of the semester Yanik was hooked, and had decided he wanted to study biology.

But how could he pursue his newfound passion for human biology while making use of his background in engineering? Returning to MIT in 2006 after completing a PhD in applied physics at Stanford University, Yanik realized he could use his skills to tackle some of the big challenges in neuroscience. 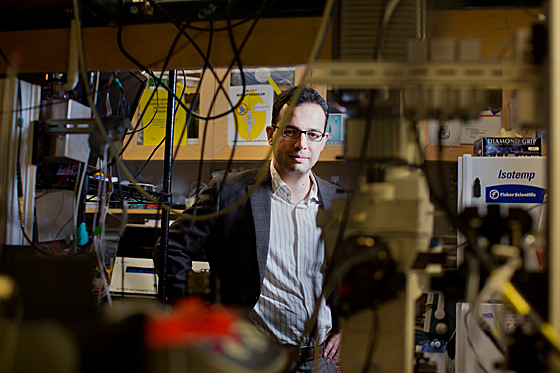 “I realized that the complexity of the human brain is so great that our existing efforts were just too slow to discover how the thousands of genes and neuronal circuits, involving thousands to billions of neurons, work,” Yanik says. “What we needed were sophisticated high-throughput screening and intelligent systems that would allow us to do neuroscience more rapidly, so that we could understand how each individual gene, molecule, neuron and neuronal circuit in the brain works, and rapidly search for therapeutics.”

To this end Yanik, now tenured as an associate professor of electrical engineering and biological engineering, founded the High-Throughput Neurotechnology Group at MIT, with the aim of developing advanced analysis, screening and therapeutic technologies for the nervous system.

The group first developed microfluidic chips to manipulate small animals such as the invertebrate Caenorhabditis elegans and the zebrafish, both used extensively as model organisms in biological research. “We have machines that can take these animals from their ‘hotels,’ rotate them, image them, perform microsurgery and regeneration studies, while testing drugs on them very rapidly,” Yanik says.

Previously, researchers studying C. elegans and zebrafish would have to manually place them under a microscope, orient them precisely and then take an image of these animals. “Oftentimes this manual handling was too slow and imprecise to allow scientists to screen large numbers of organisms,” Yanik says.

In contrast, the technologies developed by Yanik’s group can screen organisms at a rate of thousands of animals per day, while still remaining accurate enough to cut even individual nerve fibers with special lasers to test whether they can be repaired by different drugs. “By automating these using microfluidics, high-speed imaging and sophisticated analysis techniques, we have made high-throughput screening of these organisms possible,” Yanik says.

The team has also developed high-throughput techniques to rapidly generate micropatterns of proteins on substrates, upon which individual neurons can be grown. They can then study how these neurons form connections, and administer drugs to discover how they affect this process.

Paving the way for discoveries

Each of these new technologies has led to exciting biological discoveries, according to Yanik. The C. elegans screening chip, for example, led to the discovery of genes and druglike small molecules that enhance neuronal-fiber regeneration.

The researchers have also used their systems to discover molecules that enhance the wiring of mammalian neurons.

Yanik and his colleagues are now attempting to use their zebrafish-screening technology to study genes known to affect human development, and to play a role in various neurological disorders. They also hope to study and image the way in which the brains of these organisms transmit electrical signals, and how this information is processed under the influence of various neurological drugs.

“We are also developing assays to figure out how we can make specific types of neurons that are lost in different diseases, such as Parkinson’s or epilepsy, by testing large numbers of combinations of regulatory genes,” Yanik says.

Yanik grew up in Antalya, on the Mediterranean coast of southwestern Turkey. While in high school he joined the Turkish Physics Olympics team, winning bronze medals at International Physics Olympiads in China and Australia.

Partly as a result of that success, Yanik was accepted to MIT for his undergraduate studies, and moved to the United States at the age of 17. While studying for his PhD at Stanford he developed a technique to stop and store pulses of light within microchips. He also began taking courses in cellular biology and neuroscience at Stanford Medical School.

Ultimately, he hopes his research will help to improve the lives of people with a range of diseases. “Hopefully the technologies we are developing will help the research community to discover therapeutics for various neurological diseases,” he says.