An easier way to control genes 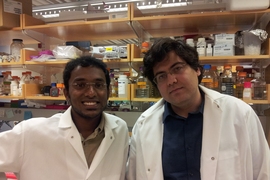 Caption:
MIT graduate students Samuel Perli and Fahim Farzadfard participated in the research.
Credits:
Photo courtesy of the researchers
MIT researchers have shown that they can turn genes on or off inside yeast and human cells by controlling when DNA is copied into messenger RNA — an advance that could allow scientists to better understand the function of those genes.

The technique could also make it easier to engineer cells that can monitor their environment, produce a drug or detect disease, says Timothy Lu, an assistant professor of electrical engineering and computer science and biological engineering and the senior author of a paper describing the new approach in the journal ACS Synthetic Biology.

“I think it’s going to make it a lot easier to build synthetic circuits,” says Lu, a member of MIT’s Synthetic Biology Center. “It should increase the scale and the speed at which we can build a variety of synthetic circuits in yeast cells and mammalian cells.”

The new method is based on a system of viral proteins that have been exploited recently to edit the genomes of bacterial and human cells. The original system, called CRISPR, consists of two components: a protein that binds to and slices DNA, and a short strand of RNA that guides the protein to the right location on the genome.

“The CRISPR system is quite powerful in that it can be targeted to different DNA binding regions based on simple recoding of these guide RNAs,” Lu says. “By simply reprogramming the RNA sequence you can direct this protein to any location you want on the genome or on a synthetic circuit.”

In previous studies, CRISPR has been used to snip out pieces of a gene to disable it or replace it with a new gene. Lu and his colleagues decided to use the CRISPR system for a different purpose: controlling gene transcription, the process by which a sequence of DNA is copied into messenger RNA (mRNA), which carries out the gene’s instructions.

Transcription is tightly regulated by proteins called transcription factors. These proteins bind to specific DNA sequences in the gene’s promoter region and either recruit or block the enzymes needed to copy that gene into mRNA.

For this study, the researchers adapted the CRISPR system to act as a transcription factor. First, they modified the usual CRISPR protein, known as Cas9, so that it could no longer snip DNA after binding to it. They also added to the protein a segment that activates or represses gene expression by modulating the cell’s transcriptional machinery.

To get Cas9 to the right place, the researchers also delivered to the target cells a gene for an RNA guide that corresponds to a DNA sequence on the promoter of the gene they want to activate.

The researchers showed that once the RNA guide and the Cas9 protein join together inside the target cell, they accurately target the correct gene and turn on transcription. To their surprise, they found that the same Cas9 complex could also be used to block gene transcription if targeted to a different part of the gene.

“This is nice in that it allows you do to positive and negative regulation with the same protein, but with different guide RNAs targeted to different positions in the promoter,” Lu says.

‘A lot of flexibility’

The new system should be much easier to use than two other recently developed transcription-control systems based on DNA-binding proteins known as zinc fingers and transcription activator-like effector nucleases (TALENs), Lu says. Although they are effective, designing and assembling the proteins is time-consuming and expensive.

“There’s a lot of flexibility with CRISPR, and it really comes from the fact that you don’t have to spend any more time doing protein engineering. You can just change the nucleic acid sequence of the RNAs,” Lu says.

“The fact that this can be used for efficient regulation of transcription in both yeast and mammalian cells is very encouraging,” says Kobi Benenson, a professor of biosystems science and engineering at ETH Zurich, who was not part of the research team. “The technology can be used in the very near term for genetic engineering and synthetic biology applications — for biomanufacturing, tissue engineering and gene therapy, among other things.”

The researchers also designed the transcription-control system so that it can be induced by certain small molecules that can be added to the cell, such as sugars. To do this, they engineered the genes for the guide RNAs so that they are only produced when the small molecule is present. Without the small molecule, there is no guide RNA and the targeted gene is undisturbed.

This type of control could be useful for studying the role of naturally occurring genes by turning them on and off at specific points during development or disease progression, Lu says.

Lu is now working on building more advanced synthetic circuits to perform applications such as making decisions based on several inputs from a cell’s environment. “We’d like to be able to scale this up and demonstrate the most complex circuits that anyone’s ever built in yeast and mammalian cells,” he says.

The research was funded by the Defense Advanced Research Projects Agency, the National Institutes of Health New Innovator Award and the National Science Foundation.