A layer of tiny grains can slow sound waves 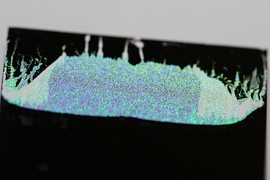 ↓ Download Image
Caption: Photograph of a two-dimensional array of microspheres adhered to a substrate

Caption:
Photograph of a two-dimensional array of microspheres adhered to a substrate

Credits:
Photo courtesy of Tian Gan
In some ways, granular material — such as a pile of sand — can behave much like a crystal, with its close-packed grains mimicking the precise, orderly arrangement of crystalline atoms. Now researchers at MIT have pushed that similarity to a new limit, creating two-dimensional arrays of micrograins that can funnel acoustic waves, much as specially designed crystals can control the passage of light or other waves.

The researchers say the findings could lead to a new way of controlling frequencies in electronic devices such as cellphones, but with components that are only a fraction the size of those currently used for that function. On a larger scale, it could lead to new types of blast-shielding material for use in combat or by public-safety personnel or equipment.

A paper on the research appears in the journal Physical Review Letters, written by Nicholas Fang, the Brit and Alex d’Arbeloff Career Development Associate Professor in Engineering Design; Nicholas Boechler, a former MIT postdoc now at the University of Washington; and four co-authors.

In their experiments, the team used a single layer of microspheres to guide and slow sound waves (known as surface acoustic waves, or SAWs) traveling across a surface, Fang says. The researchers used ideas they had previously applied in research on controlling light waves, he says, which involved the use of photonic crystals.

SAWs are widely used in electronic devices such as cellphones, Fang says, “like clocks that give a single frequency signal … to synchronize different chips or parts of a chip.” But with the new system, “we can shrink the device size” needed for processing SAWs, he says. Present-day oscillators for SAWs are relatively bulky, Fang says, but the use of a 2-D granular material to guide and slow the waves could allow such devices to be only one-sixth their present size, he estimates.

What’s more, the 2-D nature of this system could allow it to be fabricated right on a chip, along with the necessary control circuits and other components. Today’s oscillators, by contrast, are typically separate devices placed next to the chip array that controls them, Fang says — so in cases where small size is important, the new work has the potential to allow for even smaller electronic devices.

The system could potentially also be used to develop new kinds of sensors, such as microbalances capable of measuring tiny changes in weight, he says.

The same principle could also lead to a new kind of blast-shielding material, Fang suggests. If acoustic waves — such as the intense shock waves from an explosion — hit the two-dimensional material at a right angle, much of their energy can be converted to surface waves that travel sideways out of the material. A sandwich of many layers of such material might provide substantial protection from a blast in a lightweight, wearable form, though such applications will likely require substantial further research, Fang says.

John Page, a professor of physics and astronomy at the University of Manitoba, says this is “a high-quality piece of research. … I am sure that their findings will be widely accepted.”

In addition to Fang and Boechler, the research team included graduate students Jeff Eliason and Anshuman Kumar; research fellow Alex Maznev; and professor of chemistry Keith Nelson. The work was supported by the Defense Threat Reduction Agency and the National Science Foundation.