Fishing for answers to autism puzzle 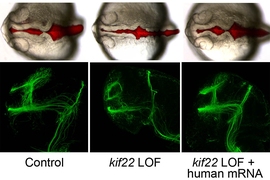 Caption:
Zebrafish with certain genes turned off during embryonic development (center and right images) showed abnormalities of brain formation (top row) and axon wiring (bottom row). At left is a normally developing zebrafish embryo.
Credits:
Image: Sive Lab
Fish cannot display symptoms of autism, schizophrenia or other human brain disorders. However, a team of MIT biologists has shown that zebrafish can be a useful tool for studying the genes that contribute to such disorders.

Led by developmental biologist Hazel Sive, the researchers set out to explore a group of about two dozen genes known to be either missing or duplicated in about 1 percent of autistic patients. Most of the genes’ functions were unknown, but the MIT study revealed that nearly all of them produced brain abnormalities when deleted in zebrafish embryos.

The findings should help researchers pinpoint genes for further study in mammals, says Sive, a professor of biology and associate dean of MIT’s School of Science. Autism is thought to arise from a variety of genetic defects; this research is part of a broad effort to identify culprit genes and develop treatments that target them.

“That’s really the goal — to go from an animal that shares molecular pathways, but doesn’t get autistic behaviors, into humans who have the same pathways and do show these behaviors,” says Sive, who is also a member of the Whitehead Institute for Biomedical Research.

Sive and her colleagues described their findings a recent paper in the online edition of the journal Disease Models and Mechanisms. Lead authors of the paper are Whitehead postdocs Alicia Blaker-Lee, Sunny Gupta and Jasmine McCammon.

Sive recalls that some of her colleagues chuckled when she first proposed studying human brain disorders in fish, but it is actually a logical starting point, she says. Brain disorders are difficult to study because most of the symptoms are behavioral, and the biological mechanisms behind those behaviors are not well understood, she says.

“We thought that since we really know so little, that a good place to start would be with the genes that confer risk in humans to various mental health disorders, and to study these various genes in a system where they can readily be studied,” she says.

Those genes tend to be the same across species — conserved throughout evolution, from fish to mice to humans — though they may control somewhat different outcomes in each species.

In the Disease Models and Mechanisms paper, Sive and her colleagues focused on a genetic region known as 16p11.2, first identified by Mark Daly, a former Whitehead researcher who identified a type of genetic defect known as a copy number variant. A typical genome includes two copies of every gene, one from each parent; copy number variants occur when one of those copies is deleted or duplicated, and can be associated with pathology.

The “core” 16p11.2 region includes 25 genes. Both deletions and duplications in this region have been associated with autism, but it was unclear which of the genes might actually produce symptoms of the disease. “At the time, there was an inkling about some of them, but very few,” Sive says.

Sive and her postdocs began by identifying zebrafish genes analogous to the human genes found in this region. (In zebrafish, these genes are not clustered in a single genetic chunk, but are scattered across many chromosomes.) The researchers studied one gene at a time, silencing each with short strands of nucleic acids that target a particular gene and prevent its protein from being produced.

For 21 of the genes, silencing led to abnormal development. Most produced brain deficits, including improper development of the brain or eyes, thinning of the brain, or inflation of the brain ventricles, cavities that contain cerebrospinal fluid. The researchers also found abnormalities in the wiring of axons, the long neural projections that carry messages to other neurons, and in simple behaviors of the fish. The results show that the 16p11.2 genes are very important during brain development, helping to explain the connection between this region and brain disorders.

Furthermore, the researchers were able to restore normal development by treating the fish with the human equivalents of the genes that had been repressed. “That allows you to deduce that what you’re learning in fish corresponds to what that gene is doing in humans. The human gene and the fish gene are very similar,” Sive says.

To figure out which of these genes might have a strong effect in autism or other disorders, the researchers set out to identify genes that produce abnormal development when their activity is reduced by 50 percent, which would happen in someone who is missing one copy of the gene. (This correlation is not seen for most genes, because there are many other checks and balances that regulate how much of a particular protein is made.)

The researchers identified two such genes in the 16p11.2 region. One, called kif22, codes for a protein involved in the separation of chromosomes during cell division; another, aldolase a, is involved in glycolysis — the process of breaking down sugar to generate energy for the cell.

Though zebrafish have long been studied as a model of brain development, the new MIT research adds a new dimension to their usefulness, says Su Guo, an associate professor of pharmaceutical sciences at the University of California at San Francisco.

“This is really nice work that shows the importance of zebrafish in revealing disease mechanisms related to human mental disorders — in this case, autism,” says Guo, who was not involved in this study.

In work that has just begun, Sive’s lab is working with Stanford University researchers to explore in mice predictions made from the zebrafish study. They are also doing molecular studies in zebrafish of the pathways affected by these genes, to get a better idea of how defects in these might bring about neurological disorders.

Sive is a member of the Simons Center for the Social Brain at MIT; this research was funded by the Simons Foundation Autism Research Initiative.