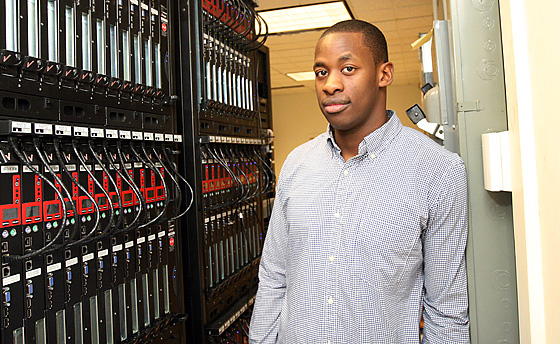 Jacob Wamala spent two years as a wide receiver for MIT’s varsity football team, goes for long runs along the Charles River and engages in hours-long pickup basketball games with his fraternity brothers as a form of stress relief.

Yet the senior from Lowell, Mass., has spent much of his time at the Institute putting himself in the shoes of people with physical limitations and disabilities, attempting to create solutions to help them with everyday activities. Wamala spent two years doing research in the AgeLab, where scientists and engineers study aging’s impact on the mind and body. A mechanical engineering major, he worked extensively with AGNES, the “Age Gain Now Empathy System,” a suit designed to give the wearer a feel for what it is like to be elderly.

“For a test, we went to Star Market to see how it actually makes you feel when you try to move around, or grab for something on the shelf,” Wamala says. He himself donned the suit, which features yellow glasses to simulate cataracts and bungee cords stretched over joints to impede movement.

So how does it make you feel?

“Inhibited,” he says, adding that it showed him why simple issues such as product placement — putting things elderly people are likely to need in the ‘sweet spot’ between eye level and chest height, so they neither have to stretch up nor bend down to reach them — can make such a big difference. Wamala was also involved in a project to understand how elderly people interact with cars, including getting in and out of the driver’s seat and operating the controls, in order to design systems to keep them driving for as long as they’re safely able to.
Though his work in the AgeLab finished after his sophomore year, last semester Wamala found himself applying his engineering skills toward a related goal: designing a better mechanism for wheelchair handling. As part of mechanical engineering’s 2.009 course, Wamala was part of a team that created an ergonomic wheelchair hand-rim alternative — called “FreeRim” — that attaches to any non-motorized wheelchair.

“It’s a device that you can use to propel yourself along and not have to grab onto the hand rim or the wheel,” Wamala explains. “Not only does that get your hands dirty but it’s also really bad ergonomically, for your joints.”

The team’s design consists of an L-shaped handle that attaches to the wheel’s axle and relies on a brake-disc mechanism to make it simple and intuitive for the user to propel forward or stop. Wamala says the start-to-finish process of engineering a product was an invaluable learning experience.

“Engineering’s one of those things that while you’re doing it, you mostly focus on the bad — what’s going wrong, why things aren’t working,” Wamala says. “But when you’re done, the gratification from a working product is just amazing.”

Wamala enjoys helping the young as well as the old. He has been a regular tutor at Orchard Gardens, a public school in Boston’s disadvantaged Roxbury neighborhood, where he taught math and helped out at the school science fair.

“Going every week was great, because I got to develop relationships with individual kids,” Wamala says. “I think for them to have mentors, especially ones who look like them, helps them a lot.”

These days, Wamala is working on a senior thesis in the Multidisciplinary Simulation, Estimation, and Assimilation Systems (MSEAS) lab under Pierre Lermusiaux, an associate professor of mechanical engineering and ocean science and engineering. There, he creates computer models of fluid dynamics. Having always been an avid swimmer and “beach person,” Wamala says he’s attracted to the challenge of capturing the ebb and flow of large bodies of water such as oceans.

“Computer programming is step-by-step discrete math, as opposed to the continuous equations for the flows of a liquid,” he says. “There’s also a probability aspect to it: When you think about an ocean, it’s a little bit random in terms of what it does, so being able to model that presents an interesting paradox.” He adds that such models have important applications for ships and navigation, as well as understanding marine ecosystems.

Wamala, who also has a concentration in economics, has always been drawn to business. As a freshman, he banded together with fellow students to form the MIT Minority Business Association (MMBA), a group dedicated to providing mentorship and career opportunities for minority students interested in commerce. During his junior year, Wamala served as the group’s vice president.

“There’s the National Society of Black Engineers, and some other minority-based professional programs, but there weren’t really any for business,” Wamala says. “People interested in financial services or consulting didn’t really have any mentors or outlets even though a lot of people go into those fields.”

Wamala has accepted a position as an investment banking analyst at Morgan Stanley in New York following graduation, and hopes to eventually attend business school. Despite what he knows will be a hectic work schedule, he is confident that he’ll find the time to continue serving whatever community he finds himself in.

“Good grades and achievements are nice and all,” he says, “but I’m probably most proud of the work I’ve done to help other people.”