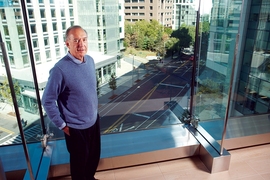 Caption:
Institute Professor Emilio Bizzi
Credits:
Photo: Kent Dayton
The simple act of picking up a pencil requires the coordination of dozens of muscles: The eyes and head must turn toward the object as the hand reaches forward and the fingers grasp it. To make this job more manageable, the brain’s motor cortex has implemented a system of shortcuts. Instead of controlling each muscle independently, the cortex is believed to activate muscles in groups, known as “muscle synergies.” These synergies can be combined in different ways to achieve a wide range of movements.

A new study from MIT, Harvard Medical School and the San Camillo Hospital in Venice finds that after a stroke, these muscle synergies are activated in altered ways. Furthermore, those disruptions follow specific patterns depending on the severity of the stroke and the amount of time that has passed since the stroke.

The findings, published this week in the Proceedings of the National Academy of Sciences, could lead to improved rehabilitation for stroke patients, as well as a better understanding of how the motor cortex coordinates movements, says Emilio Bizzi, an Institute Professor at MIT and senior author of the paper.

“The cortex is responsible for motor learning and for controlling movement, so we want to understand what’s going on there,” says Bizzi, who is a member of the McGovern Institute for Brain Research at MIT. “How does the cortex translate an idea to move into a series of commands to accomplish a task?”

One way to explore motor cortical functions is to study how motor patterns are disrupted in stroke patients who suffered damage to the motor areas.

In 2009, Bizzi and his colleagues first identified muscle synergies in the arms of people who had suffered mild strokes by measuring electrical activity in each muscle as the patients moved. Then, by utilizing a specially designed factorization algorithm, the researchers identified characteristic muscle synergies in both the stroke-affected and unaffected arms.

“To control, precisely, each muscle needed for the task would be very hard. What we have proven is that the central nervous system, when it programs the movement, makes use of these modules,” Bizzi says. “Instead of activating simultaneously 50 muscles for a single action, you will combine a few synergies to achieve that goal.”

In the 2009 study, and again in the new paper, the researchers showed that synergies in the affected arms of patients who suffered mild strokes in the cortex are very similar to those seen in their unaffected arms even though the muscle activation patterns are different. This shows that muscle synergies are structured within the spinal cord, and that cortical stroke alters the ability of the brain to activate these synergies in the appropriate combinations.

However, the new study found a much different pattern in patients who suffered more severe strokes. In those patients, synergies in the affected arm merged to form a smaller number of larger synergies. And in a third group of patients, who had suffered their stroke many years earlier, the muscle synergies of the affected arm split into fragments of the synergies seen in the unaffected arm.

This phenomenon, known as fractionation, does not restore the synergies to what they would have looked like before the stroke. “These fractionations appear to be something totally new,” says Vincent Cheung, a research scientist at the McGovern Institute and lead author of the new PNAS paper. “The conjecture would be that these fragments could be a way that the nervous system tries to adapt to the injury, but we have to do further studies to confirm that.”

This is the first time that fractionation of muscle synergies identified by factorization has been seen in chronic stroke patients, says Simon Giszter, a professor of neurobiology and anatomy at Drexel University. “It raises the question of how this occurs and if it’s a compensatory process. If it is, we can use this measurement to study how the recovery process can be accelerated,” says Giszter, who was not involved in this study.

The researchers believe that these patterns of synergies, which are determined by both the severity of the deficit and the time since the stroke occurred, could be used as markers to more fully describe individual patients’ impaired status. “In some of the patients, we see a mixture of these patterns. So you can have severe but chronic patients, for instance, who show both merging and fractionation,” Cheung says.

The findings could also help doctors design better rehabilitation programs. The MIT team is now working with several hospitals to establish new therapeutic protocols based on the discovered markers.

About 700,000 people suffer strokes in the United States every year, and many different rehabilitation programs exist to treat them. Choosing one is currently more of an art than a science, Bizzi says. “There is a great deal of need to sharpen current procedures for rehabilitation by turning to principles derived from the most advanced brain research,” he says. “It is very likely that different strategies of rehabilitation will have to be used in patients who have one type of marker versus another.”

The research was funded by the National Institutes of Health and the Italian Ministry of Health.