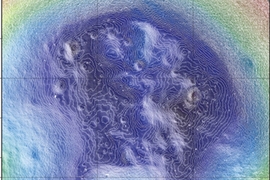 ↓ Download Image
Caption: High-resolution map showing the topography in the interior of Shackleton crater as observed by the Lunar Orbiter Laser Altimeter. Contours of elevation are plotted every 5 meters (16.5 feet). Colors show relative elevation with purple lowest and yellow highest. The crater is 4.1 kilometers (2.6 miles) deep. The spatial resolution of the topography is 10 meters and the radial accuracy is <1 meter.
Credits: Image: Zuber, M.T. et al, Nature, 2012 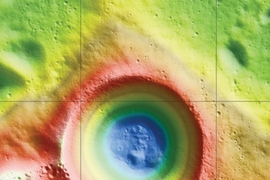 ↓ Download Image
Caption: Topography of Shackleton crater at the lunar south pole from the Lunar Orbiter Laser Altimeter. Shackleton is 21 kilometers (12.5 miles) in diameter and 4.1 kilometers (2.6 miles) deep. Over 5.6 million measurements of elevation are included in the model. The spatial resolution of the topography is 10 meters (33 feet) and the radial accuracy is <1 m (3 feet).
Credits: Image: Zuber, M.T. et al, Nature, 2012

Caption:
High-resolution map showing the topography in the interior of Shackleton crater as observed by the Lunar Orbiter Laser Altimeter. Contours of elevation are plotted every 5 meters (16.5 feet). Colors show relative elevation with purple lowest and yellow highest. The crater is 4.1 kilometers (2.6 miles) deep. The spatial resolution of the topography is 10 meters and the radial accuracy is <1 meter.
Credits:
Image: Zuber, M.T. et al, Nature, 2012

Caption:
Topography of Shackleton crater at the lunar south pole from the Lunar Orbiter Laser Altimeter. Shackleton is 21 kilometers (12.5 miles) in diameter and 4.1 kilometers (2.6 miles) deep. Over 5.6 million measurements of elevation are included in the model. The spatial resolution of the topography is 10 meters (33 feet) and the radial accuracy is <1 m (3 feet).
Credits:
Image: Zuber, M.T. et al, Nature, 2012
If humans are ever to inhabit the moon, the lunar poles may well be the location of choice: Because of the small tilt of the lunar spin axis, the poles contain regions of near-permanent sunlight, needed for power, and regions of near-permanent darkness containing ice — both of which would be essential resources for any lunar colony.

The area around the moon’s Shackleton crater could be a prime site. Scientists have long thought that the crater — whose interior is a permanently sunless abyss — may contain reservoirs of frozen water. But inconsistent observations over the decades have cast doubt on whether ice might indeed exist in the shadowy depths of the crater, which sits at the moon’s south pole.

Now scientists from MIT, Brown University, NASA’s Goddard Space Flight Center and other institutions have mapped Shackleton crater with unprecedented detail, finding possible evidence for small amounts of ice on the crater’s floor. Using a laser altimeter on the Lunar Reconnaissance Orbiter (LRO) spacecraft, the team essentially illuminated the crater’s interior with laser light, measuring its albedo, or natural reflectance. The scientists found that the crater’s floor is in fact brighter than that of other nearby craters — an observation consistent with the presence of ice, which the team calculates may make up 22 percent of the material within a micron-thick layer on the crater’s floor.

The group published its findings today in the journal Nature.

In addition to the possible evidence of ice, the group’s map of Shackleton reveals a “remarkably preserved” crater that has remained relatively unscathed since its formation more than three billion years ago. The crater’s floor is itself pocked with several smaller craters, which may have formed as part of the collision that created Shackleton.

The crater, named after the Antarctic explorer Ernest Shackleton, is more than 12 miles wide and two miles deep — about as deep as Earth’s oceans. Maria Zuber, the team’s lead investigator and the E.A. Griswold Professor of Geophysics in MIT’s Department of Earth, Atmospheric and Planetary Sciences, describes the crater’s interior as “extremely rugged … It would not be easy to crawl around in there.”

The group was able to map the crater’s elevations and brightness in extreme detail, thanks in part to the LRO’s path: The spacecraft orbits the moon from pole to pole as the moon rotates underneath. With each orbit, the LRO’s laser altimeter maps a different slice of the moon, with each slice containing measurements of both poles. The upshot is that any terrain at the poles — Shackleton crater in particular — is densely recorded. Zuber and her colleagues took advantage of the spacecraft’s orbit to obtain more than 5 million measurements of the polar crater from more than 5,000 orbital tracks.

“We decided we would study the living daylights out of this crater,” Zuber says. “From the incredible density of observations we were able to make an extremely detailed topographic map.”

The team used the LRO’s laser altimeter to map the crater’s elevations based on the time it took for laser light to bounce back from the moon’s surface: The longer it took, the lower the terrain’s elevation. Through these measurements, the group mapped the crater’s floor and the slope of its walls.

The researchers also used the laser altimeter to measure the crater’s brightness, sending out pulses of infrared light at a specific wavelength. The crater’s surface absorbed some light based on its own natural albedo, reflecting the rest back to the spacecraft. The researchers calculated the difference, and mapped the relative brightness throughout the crater’s floor and walls.

While the crater’s floor was relatively bright, Zuber and her colleagues observed that its walls were even brighter. The finding was at first puzzling: Scientists had thought that if ice were anywhere in a crater, it would be on the floor, where very little sunlight penetrates. The upper walls of Shackleton crater, in comparison, are occasionally illuminated, which could evaporate any ice that accumulates.

How to explain the bright walls? The team studied the measurements, and came up with a theory: Every once in a while, the moon experiences seismic shaking brought on by collisions, or gravitational tides from Earth. Such “moonquakes” may have caused Shackleton’s walls to slough off older, darker soil, revealing newer, brighter soil underneath.

Zuber says there may be multiple explanations for the observed brightness throughout the crater: For example, newer material may be exposed along its walls, while ice may be mixed in with its floor. Her team’s ultra-high-resolution map, she says, provides strong evidence for both.

“Ice in the polar regions has been sort of an enigmatic thing for some time … I think this is another piece of evidence for the possibility of ice,” Bussey says. “To truly answer the question, we’ll have to send a lunar lander, and these results will help us select where to send a lander.”

Zuber adds that the group’s topographic map will help researchers understand crater formation and study other uncharted areas of the moon.

“I will never get over the thrill when I see a new terrain for the first time,” Zuber says. “It’s that sort of motivation that causes people to explore to begin with. Of course, we’re not risking our lives like the early explorers did, but there is a great personal investment in all of this for a lot of people.”