A faster way to catch cells 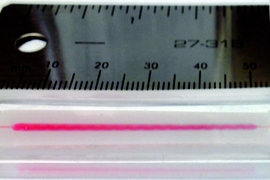 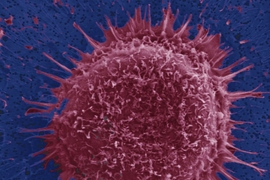 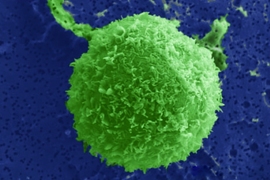 Caption:
Green cells adhere weakly without tethers and are rapidly removed. Scale is 5 microns.
Credits:
Image: Jungwoo Lee
Separating complex mixtures of cells, such as those found in a blood sample, can offer valuable information for diagnosing and treating disease. However, it may be necessary to search through billions of other cells to collect rare cells such as tumor cells, stem cells or fetal cells. “You’re basically looking for a needle in a haystack,” says Sukant Mittal, a graduate student in the Harvard-MIT Division of Health Sciences and Technology (HST).

Mittal and his colleagues at MIT and Massachusetts General Hospital (MGH) have now demonstrated a new microfluidic device that can isolate target cells much faster than existing devices. Such technology could be used in applications such as point-of-care diagnostics and personalized medicine.

The researchers describe their results in the Feb. 21 issue of Biophysical Journal. Other authors of the paper are Ian Wong, a postdoc at MGH and Harvard Medical School (HMS), MIT chemical engineering professor William Deen, and Mehmet Toner, a professor of biomedical engineering at MGH, HMS and HST.

Researchers have used a number of techniques to sort cells based on differences in size, density or electrical properties. However, since the physical characteristics of cells can vary significantly, these techniques risk separating cells incorrectly, leading to an erroneous diagnosis. A more specific way to isolate cells is to use antibodies that latch on to distinctive molecules displayed on the surfaces of the target cells.

However, this selective approach only works if the target cells come into contact with the antibodies designed to capture them. This is unlikely to happen when the cells are moving at relatively high speeds.

“Imagine you’re standing on a bridge over a river, and you throw a message in a bottle out in the middle,” Wong says. “If the river is moving really slowly, you could imagine that eventually the bottle will drift over to the riverbank and somebody can grab it. But if the river is flowing too quickly, then the bottle is swept downstream without ever approaching the sides.”

That’s the problem the team needed to solve, Wong says: “Can we steer the bottle toward the riverbank so that it can get caught?” To achieve that, the MIT and MGH researchers designed their device to guide the fluid toward the bottom of the channel as it flows, bringing more of the cells in contact with the antibodies. Key to their new design is the use of a soft membrane with nanoscale pores, which separates two adjacent microchannels.

Cells enter one channel only, and as they flow through the channel, the fluid is rapidly drawn to the porous divider, bringing the cells with it. Fluid can pass into the other channel, but the cells cannot. Once they reach the surface, they start rolling — slowly enough that target cells have time to attach to the antibodies and get captured, but fast enough to keep the other cells moving. Such rolling behavior is similar to how white blood cells or stem cells selectively “home in” to sites of infection and injury in the body.

Shashi Murthy, an associate professor of chemical engineering at Northeastern University, says the device is simple but very well-designed. “The field of microfluidics is very largely done by experimental trial and error,” says Murthy, who was not involved in this research. “One seldom sees as in-depth an analysis, and one so well-grounded in theory.”

One potential application for these devices is to isolate cancer cells from patient blood samples. Toner’s group has previously shown that the number of circulating tumor cells in the bloodstream correlates with the clinical response to treatment in a given patient, suggesting the potential for personalized medicine for cancer patients.

“Considerable validation and testing will be necessary before this early-stage device can be deployed in the clinic,” Toner says. “Nevertheless, this novel approach may enable exciting diagnostic and therapeutic opportunities that are not feasible using existing technologies.”