Study: Many Americans die with ‘virtually no financial assets’ 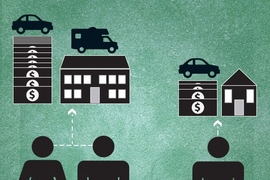 Caption:
A new study co-authored by MIT economist James Poterba shows that many Americans have little financial cushion in retirement.
Credits:
Graphic: Christine Daniloff
It is a central worry of many Americans: not having enough money to live comfortably in old age. Now an innovative paper co-authored by an MIT economist shows that a large portion of America’s older population has very little savings in bank accounts, stocks and bonds, and dies “with virtually no financial assets” to their names.

Indeed, about 46 percent of senior citizens in the United States have less than $10,000 in financial assets when they die. Most of these people rely almost totally on Social Security payments as their only formal means of support, according to the newly published study, co-authored by James Poterba of MIT, Steven Venti of Dartmouth College, and David A. Wise of Harvard University.

That means many seniors have almost no independent ability to withstand financial shocks, such as expensive medical treatments that may not be covered by Medicare or Medicaid, or other unexpected, costly events.

“There are substantial groups that have basically no financial cushion as they are reaching their latest years,” says Poterba, the Mitsui Professor of Economics at MIT.

However, the study — one of the first to examine Americans’ end-of-life finances — also reveals a diversity of outcomes among senior citizens. Between 1993 and 2008, it found, unmarried older individuals had median wealth of about $165,000 roughly a year before they died — a figure that includes current and future Social Security income, job-related pension benefits, home equity and financial assets. In the same period, the median wealth for continuously married senior citizens, roughly a year before they died, was more than $600,000.

“There is a lot of divergence in how people are doing,” Poterba says. Those disparities also complicate the public-policy issues relating to the new findings.

“One of the clear messages is that it is very hard to do a one-size-fits-all retirement policy,” Poterba says. “We need to recognize that, for example, if we were to substantially reduce Social Security benefits for those later in life, that there is a share of the elderly households for whom that would translate very directly into reduced income, because they seem to have accumulated little in the way of financial resources.”

The paper appears as a chapter in a book edited by Wise — “Investigations in the Economics of Aging” — newly published by the University of Chicago Press.

The three pathways of retirement …

While much attention has been paid to how much wealth people should aim to accumulate at the time of retirement, this study focuses on the evolution of that wealth during retirement, right up until death. The idea, as Poterba puts it, was “instead of looking at these people going into retirement, why don’t we try looking late in the game, and see how it all came out.”

The research in question draws from data collected in the Health and Retirement Study (HRS), an ongoing survey that follows people throughout their retirement years, thus providing data on their wealth over time; it is sponsored by the National Institutes of Health and based at the University of Michigan.

Poterba, Venti and Wise focused their study on people who were 70 and older in 1993, when the HRS began, and examined data running through 2008. This enabled them to track levels of wealth, prior to the participants’ deaths, over an extended period. People were surveyed every two years, which means that on average, those who passed away between 1993 and 2008 were last studied roughly one year before their deaths. The researchers identified three main “pathways,” running between the early years of retirement and death, for the households in the survey: those consisting of one person who remained single until death; married individuals who outlive their spouses and die single; and married individuals who die before their spouses.

The three pathways tend to produce very different financial outcomes for the elderly. Married couples, for one thing, are better able to mitigate the financial burdens of old age. Among retirees in the study, 52 percent who were single had annual incomes of less than $20,000 and less than $10,000 in other financial assets; by contrast, just 36 percent of single people who started out in two-person households at retirement fell below those levels, and only 26 percent of people in two-person households fit that description.

“There really is a key distinction between what it looks like for the married [couples] and the singles,” says Poterba, who is also the current president of the National Bureau of Economic Research (NBER).

The study also revealed a “strong correspondence” between wealth in 1993 and the length of time that people lived. That relationship held true across a variety of asset classes: People whose homes were worth more, who had larger retirement incomes, and who had more financial savings all tended to live longer than those who had fewer assets.

While there is, Poterba observes, a “very active debate” among social scientists about the precise causal relationship between wealth and health, the study helps confirm, he notes, that “the patterns of health status in these years are quite persistent.”

… And at least two pathways for future research

The paper, which Poterba presented at an NBER conference last week, has earned praise from other researchers. David Laibson, an economist at Harvard, calls it “a terrific paper, which should have a significant impact on our national conversation about savings adequacy.” Moreover, Laibson suggests that the replacement of defined-benefit retirement plans with 401(k) plans for many workers — investments that are subject to market fluctuations — means that the financial situation for some seniors “is likely to get even worse in the years ahead. … For many reasons, especially preretirement leakage and poor stock market returns, households are accumulating far too little wealth in their 401(k) plans.”

For his part, Poterba agrees that this is an issue for further discussion, although he also notes that in the current study, many people “who end up in the bottom [tier] in terms of income when they are very old are folks who were probably not covered by defined-benefit plans during their working lives in any event.”

Poterba also suggests that future research is needed to identify the mechanisms that financially struggling seniors use to pay for their needs late in life. “There may be other sources of support that are hard to track,” he says, citing informal help from family members as a way in which seniors likely supplement their incomes.

Broadly, Poterba hopes that tracking the wealth of seniors as they move through retirement will add nuance to the policy dialogue. “It’s a complicated problem,” he says. “Households that reach retirement differ widely in their financial circumstances, and that heterogeneity not only persists, but is accentuated as people go further into their retirement years.”

The research was supported by a grant from the National Institute of Aging. Poterba serves as a trustee of the College Retirement Equity Fund and the TIAA-CREF mutual funds, which offer retirement savings products to consumers.