Caption:
Aminata Kane MBA '13.
Credits:
Photo courtesy of Aminata Kane
Growing up, Aminata Kane MBA ’13 listened to her mother’s advice. Her mother, who is an entrepreneur, encouraged Kane to follow her passion, take risks and start her own company. Kane knew that MIT Sloan would be the best place to launch Fula & Style an African, urban-chic clothing company that uses vibrant colors and prints in its designs.

Kane devised the idea over January break and developed the company over the summer. Her goal is not only to make great-fitting clothes for the people in her country of origin, Senegal, West Africa, but to also create jobs, and have a positive social impact on the African continent.

Fula & Style clothes are affordable and can easily be fitted to any woman, regardless of her body shape. The company's new product, to be available soon, is a semi-sewn version of the company’s best-selling clothing, so the client can take them to a local tailor for the perfect height and hips fit.

“I’ve been thinking about starting my own company for the last two years. I have lived in Paris, the city of fashion and couture, most of my life, and it was easy to find great and affordable clothes there. But when I started working in Africa, I had a hard time finding clothes that were culturally appropriate, covering arms and legs for example, and that were also stylish and affordable,” she says. “Additionally, the clothes that I brought back from Paris weren’t appropriate for the climate in Africa. I realized that many women faced the same issue. At the same time, tailors who had many clients for the biggest celebrations of the year, had no work the rest of the year. That’s when the idea for a clothing company came to me.”

To help create jobs, Kane uses only materials produced locally — all the fabrics, even the buttons, are made and purchased from Senegal or African craftspeople. She designs the clothes herself and works with local tailors to complete the process. All the models she uses are from the area and are not as petite as traditional Western models, and this helps reflect the brand correctly, Kane says. 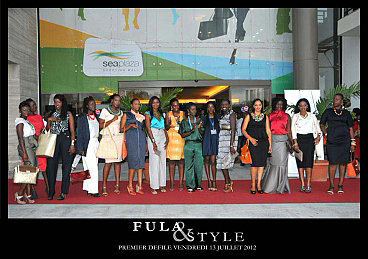 
Last summer she returned home and began to work on Fula & Style full-time. She hired five friends and family members as interns and within two weeks they were able to put on a fashion show. Kane says the orders then began to pour in.

“I started small, with just 50 clients, and 90 percent of the clothes we produced sold right away. The goal was to make affordable, professional, work wear for the women of West Africa — and it is working,” Kane says. “We have many return customers and recently expanded to make accessories. Right now we have just a line of women’s clothes, but one day I hope to create clothes for men too.”

“It’s been great to receive personal and professional advice from MIT Sloan students,” she says. “MIT is really an amazing place. There are so many valuable resources for entrepreneurs here — the Legatum Center, the IDEAS Global Challenge, different grants and fellowships, the $100K Competition, the Media Lab and the Trust Center for MIT Entrepreneurship have been invaluable to me. If you want to be an entrepreneur, MIT Sloan is the place to be.”

On Nov. 8, Kane returned briefly to Senegal. The Africa Media Leaders Forum held a gala dinner and invited Fula & Style to host a fashion show in front of an audience of 450 people. Kane and her team put together a high-energy fashion show that wowed the audience.

Kane wants to grow the company slowly and steadily, so for now orders are placed online or through her catalog and customers can pick up their purchases in the Senegal showroom. Within the next five years, Kane hopes to expand into other African countries such as Côte-d'Ivoire, Ghana, Burkina Faso, Gabon and Benin.