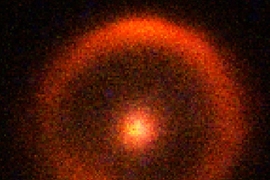 ↓ Download Image
Caption: At the center of this infrared image is a massive red galaxy, 9.8 billion light-years from Earth, which acts like a cosmic magnifying glass, distorting the light from an even more distant galaxy, 17.3 billion light-years away. The result is a spectacular Einstein ring image of the background galaxy. The observations were made with the 10-meter Keck-11 Telescope on Mauna Kea, Hawaii.
Credits: Image: David Lagattuta/W. M. Keck Observatory

Caption:
At the center of this infrared image is a massive red galaxy, 9.8 billion light-years from Earth, which acts like a cosmic magnifying glass, distorting the light from an even more distant galaxy. The observations were made with the 10-meter Keck-11 Telescope on Mauna Kea, Hawaii.
Credits:
Image: David Lagattuta/W. M. Keck Observatory
Galaxies such as our own Milky Way are believed to form over billions of years through the coming together of many smaller galaxies. As a result, it is expected that there should be many smaller dwarf galaxies scattered around the Milky Way. However, very few of these tiny relic galaxies have been observed, which has led astronomers to conclude that many of them must have very few stars or may be made almost exclusively of dark matter.

In a discovery announced Jan. 18, a team of researchers including an MIT postdoc has found a dark dwarf galaxy about 10 billion light years from Earth. It is only the second such galaxy ever observed outside our local region of the universe, and is by far the most distant.

The newly discovered dwarf galaxy is a satellite, meaning it clings to the edges of a larger galaxy. “For several reasons, it didn’t manage to form many or any stars, and therefore it stayed dark,” says Simona Vegetti, a Pappalardo Fellow in MIT’s Department of Physics and lead author of a paper on the work appearing in the Jan. 18 online edition of Nature.

Scientists theorize the existence of dark matter to explain observations that suggest there is far more mass in the universe than can be seen. They believe that dark matter should comprise about 25 percent of the universe; however, because the particles that make up dark matter do not absorb or emit light, they have so far proven impossible to detect and identify.

Computer modeling suggests that the Milky Way should have about 10,000 satellite galaxies, but only 30 have been observed. “It could be that many of the satellite galaxies are made of dark matter, making them elusive to detect, or there may be a problem with the way we think galaxies form,” Vegetti says.

The team turned to more distant galaxies to search for dark satellites, using a method called gravitational lensing. To use this technique, researchers find two galaxies aligned with each other, as viewed from Earth. The more distant galaxy emits light rays that are deflected by the closer galaxy (which acts as a lens). By analyzing the patterns of light rays deflected by the foreground lens galaxy, the researchers can determine if there are any satellite galaxies clustered around it and measure how massive they are.

"It's really exciting that we not only have a method in hand to test predictions from the cold dark matter model, but also made a discovery of such a low mass dark satellite hundreds of times farther out in the universe compared to our local group of galaxies," says Koopmans.

The researchers used the Keck-II Telescope in Hawaii to make their observations, taking advantage of a special piece of optical equipment that provides sharp images of the sky. They plan to use the same method to look for more satellite galaxies in other regions of the universe, which they believe could help corroborate or challenge predictions of how dark matter behaves.

“Now we have one dark satellite, but suppose that we don’t find enough of them — then we will have to change the properties of dark matter,” Vegetti says. “Or, we might find as many satellites as we see in the simulations, and that will tell us that dark matter has the properties we think it has.”

For example, because temperature determines the mass and number of satellites that form, it may be necessary to adjust the current temperature estimates for dark matter if the number of dark satellites found is less than projected.

“The existence of this low-mass dark galaxy is just within the bounds we expect if the universe is composed of dark matter that has a cold temperature. However, further dark satellites will need to be found to confirm this conclusion,” says Vegetti.

Andrey Kravtsov, associate professor of astronomy and astrophysics, says the new study is a “very valuable contribution” to the ongoing testing of the prediction that small clumps of dark matter should be found scattered around the edges of large galaxies. “The uncertainties are still quite large, but so far the abundance of such clumps is in accord with expectations of structure formation models based on cold dark matter scenario,” says Kravtsov, who was not involved in the research.