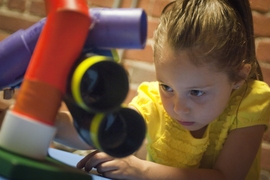 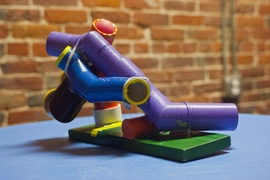 Caption:
The novel toy the researchers built for their experiments.
Credits:
Photo: Patrick Gillooly
Suppose someone showed you a novel gadget and told you, “Here’s how it works,” while demonstrating a single function, such as pushing a button. What would you do when they handed it to you?

You’d probably push the button. But what if the gadget had other functions? Would it occur to you to search for them, if your teacher hadn’t alluded to their existence?

Maybe, maybe not. It turns out that there is a “double-edged sword” to pedagogy: Explicit instruction makes children less likely to engage in spontaneous exploration and discovery. A study by MIT researchers and colleagues compared the behavior of children given a novel toy under four different conditions, finding that children expressly taught one of its functions played with the toy for less time and discovered fewer things to do with it than children in the other three scenarios. 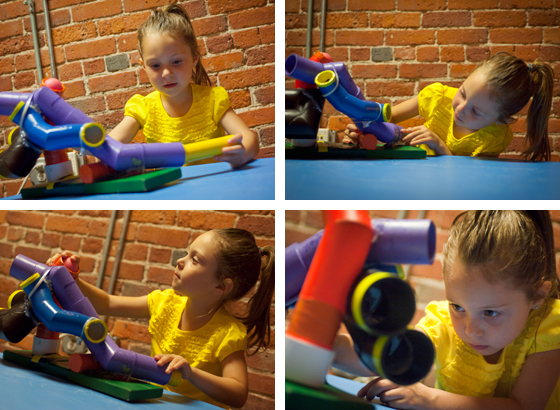 Gabriella, 5, plays with the researchers' toy in the PlayLab at Boston's Children's Museum.
Photos: Patrick Gillooly
According to Laura Schulz, the Class of 1943 Career Development Associate Professor of Cognitive Science at MIT, this is rational behavior, as teaching is meant to impart skills quickly and efficiently. The danger is leading children to believe that they’ve learned all there is to know, thereby discouraging independent discovery. “If I teach you this one thing and then I stop, then you may say, ‘Well that’s probably all there is,’” Schulz says.

To study this phenomenon, the researchers built an original toy, an appealing tangle of colored tubes with four different functions: pull on a yellow tube and it squeaks; press a button and a blue tube lights up; touch a pad to hear different music notes; and look through a black tube to see a reversed mirror image of your face.

They took the toy to Boston’s Museum of Science, where they recruited 85 preschool-age children to interact with the toy under one of four conditions: pedagogical, interrupted, naïve and baseline.

In the pedagogical condition, the experimenter said, “Look at my toy! This is how my toy works,” and demonstrated the squeak function twice (but made no mention of the other functions).

The interrupted condition was identical to the pedagogical condition, except that immediately after the squeak demonstration the experimenter interrupted herself, saying, “I just realized, I forgot to write something down over there. I have to go take care of it right now!”

In the naïve condition, the experimenter pulled out the toy and said, “I just found this toy! See this toy?” She then “discovered” the squeak function as if by accident, and said, “Huh! Did you see that?” while repeating the action, as if surprised.

In the baseline condition, the experimenter simply said, “Wow, see this toy? Look at this!” and put it on the table, without demonstrating any function.

In all four conditions, after the experimenter’s dialogue, the child was left to play with the toy on his or her own, and researchers observed the ensuing behavior. 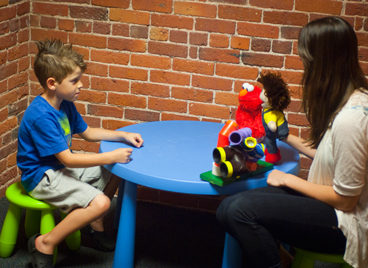 
These results suggest children are extremely sensitive to the subtleties of a teaching scenario, Schulz says: What matters is not if children are shown a function, but how they are shown that function. If they believe that an informed teacher has taught them everything, they will be less motivated to explore.

In a related experiment, the researchers replicated their results among children who were indirect observers of others being taught: Those who were given the toy after merely watching an adult interact with another child, using the same paradigms as the first study, did less exploring when they’d witnessed the pedagogical scenario than any of the other three scenarios.

The results of both experiments are described in a recent paper published in the journal Cognition; in addition to Schulz and her graduate student, Hyowon Gweon, the paper’s co-authors are Elizabeth Bonawitz, a former graduate student of Schulz’s, now a postdoc at the University of California at Berkeley; Patrick Shafto, an assistant professor at the University of Louisville; and Elizabeth Spelke, a professor of psychology at Harvard University.

“The whole double-edged sword concept is really interesting,” says Susan Gelman, a professor of psychology at the University of Michigan. “In almost any domain and across different cultures, we engage in spontaneous teaching. It doesn’t have to be in the classroom, we just naturally do this with young children — we show them how things are done, point out what’s important. This study shows how sensitive children are to the kind of cues that signal teaching.” Further experiments may want to examine differences in children’s behavior across cultures, she adds.

So what’s a teacher or parent to do? Schulz is quick to point out that the study is not an argument against instruction. “Things that you’re extremely unlikely to figure out on your own — how to read, how to do calculus, how to drive a car — it would make no sense to try to learn by exploration,” she says.

Rather, the study underscores the real-world trade-offs between education and exploration, and the importance of acknowledging what is unknown even while imparting what is known. Teachers should, where possible, offer the caveat that there may be more to learn.

“Teachers can say things like, ‘I’m showing you what we think is true, but there are a lot of other possibilities you should consider,’” Schulz says.

In short, she says, “a little humility can go a long way.”