Among 94 young researchers from across the country honored
Department of Electrical Engineering and Computer Science
Publication Date:
Press Inquiries 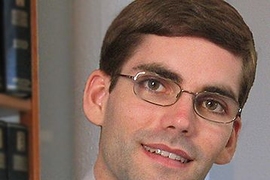 The awards, established by President Bill Clinton in 1996, are coordinated by the Office of Science and Technology Policy within the Executive Office of the President. Sixteen Federal departments and agencies join together annually to nominate the most meritorious scientists and engineers. Awardees are selected for their pursuit of innovative research at the frontiers of science and technology and their commitment to community service as demonstrated through scientific leadership, public education or community outreach.

Palacios focuses his research on the design, processing and characterization of new electronic devices based on wide bandgap semiconductors for power amplification and digital applications beyond 100 GHz. His group is also focused on developing new applications and devices for graphene, a new one-atom-thick electronic form of pure Carbon with properties that make it one of the most promising 21st century materials.

Within the past few years, Palacios has collaborated with MIT and industry colleagues to found and direct the MIT/MTL Center for Graphene Devices and Systems (MIT-CG). The interdepartmental center was created Sept. 1 and provides MIT researchers and industrial partners a means for collaborations to advance the science and engineering of graphene-based technologies.

"It is a tremendous honor to have been selected for the PECASE award," Palacios said. "It would have not been possible without the hard work and dedication of my students, and the support of my colleagues at MIT. This is an amazing place and I am humbled to be able to represent it in this award. I would also like to thank my sponsors at ONR, DARPA, ARL, DOE, ARPA-E, MARCO, NSF and other organizations and companies for supporting my research and helping us to push the limits of electronics."