Putting ‘Technology’ on the map

Caption:
Members of the procession gather in the main lobby prior to the start of the event.
Credits:
Photo: Brooks Canaday

Caption:
Approximately 400 members of the MIT community — administrators, faculty, staff, students and alumni — participated in a formal procession into the event. Prior to the event, the participants gathered to meet and don their academic regalia.
Credits:
Photo: Dominick Reuter

Caption:
The procession makes its way into the event.
Credits:
Photo: Dominick Reuter

Caption:
Institute Professor John Harbison leads the attendees in a rendition of 'In Praise of MIT'
Credits:
Photo: Dominick Reuter

Caption:
MIT Athletics mascot Tim the Beaver posed for photos with attendees during a reception after the event.
Credits:
Photo: Dominick Reuter

Caption:
The keynote address was delivered by David Ferriero, the 10th Archivist of the U.S., who spent more than 30 years as a librarian at MIT. He told of how MIT's founder, William Barton Rogers, helped save the Declaration of Independence. He also read a note from his boss: President Barack Obama.
Credits:
Photo: Brooks Canaday

Caption:
The crowd gathered at the Boston Convention and Exhibition Center, just prior to the start of the program.
Credits:
Photo: Brooks Canaday

Caption:
The Next Century Convocation on April 10 included a procession of administrators, faculty, staff, students and alumni. Here, one member of the procession dons the academic regalia.
Credits:
Photo: Brooks Canaday


William Barton Rogers, who founded MIT exactly 150 years ago on April 10, did not invent the word technology. But his choice of that word for the name of the new institution, at a time when terms like “useful arts” were more typically used, helped to bring that term — and the hands-on approach to solving the world’s problems that it embodied — into popular usage in American and world culture.

Rogers, whom MIT President Susan Hockfield described as a “brilliant, charismatic dynamo,” founded the Institute on “principles that were revolutionary in his day,” she said. He was not just putting emphasis on a newly minted term, but on a whole new philosophy of education, stressing that actually working with one’s hands and building things was as important as knowledge gained from books. He sought to “make science more useful, and the ‘useful arts,’ technology and engineering, more scientific,” she said.

Hockfield’s comments were delivered before nearly 8,000 members of the extended MIT family who gathered on Sunday in the Boston Convention and Exhibition Center for a Convocation that both reflected on the Institute’s accomplishments and set the stage for the road ahead, celebrating the century and a half of achievement that sprang from the charter that Rogers won from the Massachusetts legislature in 1861.

Rogers “forged a new kind of institution that became a new kind of innovation machine,” Hockfield said, and one that had “a commitment to meritocracy and hard work.” Those are qualities that have persisted through the Institute’s history, she said, and now it is time to take the tools that he provided “and shape them for a new day.”

Though MIT has always embodied that commitment to hard work on solving the greatest problems of the time, it has also always emphasized a well-rounded approach to life, and in that spirit the Convocation also celebrated the artistic and cultural dimensions of the life of its students, faculty, alums and staff. Music and poetry created and performed by MIT students and faculty featured prominently in the two-hour gathering, which opened with a rousing drumming performance by the Rambax MIT Senegalese Drum Ensemble, led by lecturer Lamine Touré and associate professor Patricia Tang, as a procession of MIT’s administrators, faculty, staff, alumni and students entered the hall in full academic regalia. 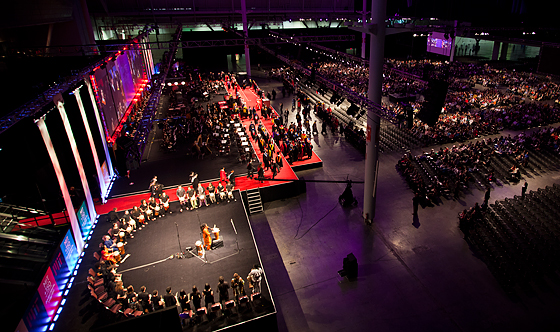 Members of the MIT community take part in a procession into the Boston Convention and Exhibition Center
Photo: Brooks Canaday

Later in the program, there were performances of original music and poetry composed by MIT faculty members, and performed by the MIT Symphony Orchestra, the MIT Chamber Chorus, the MIT Concert Choir, the MIT Wind Ensemble, and the MIT Festival Jazz Ensemble.

David S. Ferriero, 10th Archivist of the United States and former director of the MIT Libraries, pointed out in his keynote address that Rogers, in addition to founding MIT, was also responsible for saving one of the nation’s most revered documents: the Declaration of Independence. In the late 19th century, when others had proposed that the document be “restored,” by having its words retraced in darker ink because they were beginning to fade, Rogers fought instead to have the original preserved as it was.

Institute Professor and Nobel laureate Phillip Sharp said that “the mission of MIT is to create the future,” and added that one of its longstanding principles has been one of true meritocracy based on actions: “The contributions of a new student are as important as those of a senior professor,” he said.

Institute Professor and former U.S. Secretary of the Air Force Sheila Widnall ’60, SM ’61, ScD ’64 said that “I am a strong believer in the uniqueness of the MIT undergraduate program.” She said that Rogers’ “unique vision never ceases to amaze me,” and added that “it is up to us to continue the quest.” 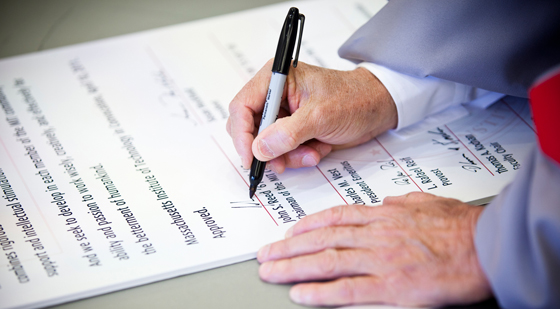 David Mindell PhD ’96 — director of MIT’s program in Science, Technology, and Society; Frances and David Dibner Professor of the History of Engineering and Manufacturing; and Professor Aeronautics and Astronautics — said that when Rogers “put the T in MIT,” the word technology was still new and little-used, and he “brought the word, and the very idea, into American consciousness.” Mindell — who is also the chair of the MIT150 steering committee, which planned the Next Century Convocation as well as many more events planned through June — said his wish for MIT, as it looks ahead to the next 150 years, is for it “to be able to teach future generations as effectively as our teachers taught us.”

“Our founders intended to create something new,” said Professor of City Planning and Senior Advisor to the President Philip Clay PhD ’75, who recently stepped down as MIT’s chancellor, and in doing so “what they in fact did was create an institution that would be relevant beyond a time they could imagine.” From the beginning, MIT was committed to “the recognition of excellence and merit — talent, not legacy.”

Noting the parallels between his own trajectory and that of MIT’s first black student, Robert Taylor, he pointed out that they both came from North Carolina and attended the Williston School there, which was established right after the Civil War and “intended to give the best possible education to the children of newly freed slaves.” Through the years, he said, MIT has “come to welcome talent from the whole human race,” adding that “we have been, and still are, an engine of opportunity.”
Professor of Management Lotte Bailyn, former chair of the MIT faculty, noted that equality of opportunity has improved dramatically through the years. When she first visited MIT, there was “exactly one woman” on the faculty, but when a report showed the unequal treatment of women here the administration quickly “looked at the facts, accepted them, and acted.” Today, women make up 21 percent of the faculty, she noted.

Institute Professor Robert Langer ScD ’74 recounted how when he first attempted to use the tools of chemical engineering to improve the delivery of drugs — at the time, an unheard-of crossing of disciplinary boundaries — many people told him not to bother. “People will tell you that it’s impossible, that it will not work,” he said. “It’s rarely true. There is very little that is truly impossible.”

In that spirit, Hockfield said, “I believe we have a responsibility to turn our founder’s tools to the tasks of today.” Among these, she said, “We must apply our skills in interdisciplinary problem solving to the looming problems of the planet — clean energy and climate change, poverty and famine, the health of our oceans and the future of our cities.”

And, she said, above all, “we must inspire the next generation of young people, from every background, to understand that science, math and engineering can give them the exhilarating power to participate, rather than sitting passively as spectators and consumers, to become the active explorers and inventors who will design the future.”