Caption:
The late William Lenoir &#39;61, SM &#39;62, PhD &#39;65 was the first MIT alumnus to fly on the space shuttle, joining the crew of STS-5 aboard Columbia in 1982. Here Lenoir checks vision using DIOPTER measuring device during that flight.
Credits:
Image: NASA

Caption:
Jeffrey Hoffman, now Professor of the Practice in the Department of Aeronautics and Astronautics, rehearses a space test in 1985 with a Slinky, part of a &#39;Toys in Space&#39; project.
Credits:
Image: NASA

Caption:
Ronald McNair PhD &#39;77 was one of seven astronauts who died in the Space Shuttle Challenger. In this 1983 photo, he trains on the remote manipulator system (RMS) simulator.
Credits:
Image: NASA

Caption:
The MIT-led Alpha Magnetic Spectrometer (AMS) project, seen here, was one of many Institute experiments to fly aboard the space shuttle. Samuel Ting&#39;s experiment flew aboard STS-134, the final flight for the Space Shuttle Endeavor.
Credits:
Image: NASA/AMS Collaboration

Caption:
Space Shuttle Endeavor (STS-134) lifts off on its final voyage, also carrying the last MIT alumni to partake in a shuttle flight. STS-135, the final shuttle mission, carries no MIT alumni on board.
Credits:
Photo: John Tylko
Friday’s scheduled liftoff of Space Shuttle Atlantis marks the beginning of the end of nearly four decades of collaboration between MIT and NASA on the nation’s space shuttle program — a partnership that has shaped spacecraft design, operations and scientific payloads since Space Shuttle Columbia first blasted off in 1981.

A total of 27 MIT graduates have since flown on 59 space shuttle missions. Indeed, the Institute has produced more NASA astronauts than any other private university: Starting with astronaut David Scott SM ’62 on the Gemini 8 spaceflight in 1966, 32 MIT alumni have flown in space. Four graduates walked on the lunar surface during the Apollo program from 1969 to 1972.

No MIT alumni are aboard STS-135 — although Kwatsi Alibaruho ’95 is the lead flight director for Atlantis’ last voyage — but several made their mark aboard STS-134, this spring’s final flight of Space Shuttle Endeavour. Mission specialists Gregory Chamitoff PhD ’92 and Michael Fincke ’89 participated in the shuttle program’s last scheduled spacewalk, on May 27. With Endeavour’s return to Earth five days later, Fincke set a new U.S. spaceflight endurance record, with a total of 381 days spent in space during three missions. While docked with the International Space Station, Chamitoff and Fincke teamed up with fellow NASA astronaut Cady Coleman ’83, who was nearing the completion of her six-month-long space mission aboard the orbiting laboratory.

The late William Lenoir ’61, SM ’62, PhD ’65 was the first MIT alumnus to fly on the space shuttle, joining the crew of STS-5 aboard Columbia in 1982. Prior to his selection as a NASA astronaut, Lenoir was an assistant professor of electrical engineering at MIT.

Jeffrey Hoffman, now Professor of the Practice in the Department of Aeronautics and Astronautics, participated in five space shuttle missions from 1985 to 1996, including the challenging STS-61 mission in 1993, which successfully restored the Hubble Space Telescope’s imaging capability. He has logged more than 21.5 million miles in space.

Franklin Chang-Diaz ScD ’77 flew on a record seven shuttle flights, spanning from STS-61C aboard Columbia in 1986 to STS-111 aboard Endeavour in 2002. In the process Chang-Diaz accrued some 1,601 hours in space, including 19 hours and 31 minutes in three spacewalks.

Ronald McNair PhD ’77 was one of seven astronauts who died in the Space Shuttle Challenger accident in 1986; MIT’s Building 37 is named in his honor.

The space shuttle program returned to flight under the leadership of an MIT alumnus: Frederick Hauck SM ’66, who commanded Discovery on the STS-26 mission in 1988, the first launch following the Challenger disaster. Three MIT alumni — Hauck, Kenneth Cameron ’78, SM ’79 and Pamela Melroy SM ’84 — have commanded a total of five space shuttle missions.

There at the beginning

MIT’s involvement in the space shuttle program began long before the first launch: In the early 1970s, NASA asked the MIT Instrumentation Lab to begin developing the shuttle avionics system. After its divestment from MIT in 1973, the renamed Charles Stark Draper Laboratory continued to develop and test the space shuttle’s flight control system.

For instance, Space Shuttle Endeavour’s final mission in May successfully delivered the MIT-led Alpha Magnetic Spectrometer (AMS) to the International Space Station. The AMS, developed under the leadership of Samuel Ting, the Thomas Dudley Cabot Professor of Physics, is designed to study high-energy particles that could lead to new theories about the formation and evolution of the universe. An AMS prototype first flew aboard Space Shuttle Discovery in 1998.

MIT’s Center for Space Research has sent several instruments into orbit on space shuttles, including the CCD Imaging Spectrometer as well as the High Energy Transmission Grating for the Chandra X-ray Observatory, which was deployed in orbit by astronaut-alumna Coleman on Space Shuttle Columbia in 1999.

The MIT Space Systems Laboratory, under the direction of professors Edward Crawley and David Miller, developed a series of experiments to evaluate the dynamics of structures in microgravity and to develop advanced laboratory tools for space research. These included the Middeck 0-G Dynamics Experiment (MODE) on STS-48 in 1991 and on STS-62 in 1994, and the Middeck Active Control Experiment (MACE) on STS-67 in 1995. The Space Systems Laboratory also developed SPHERES (Synchronized Position Hold Engage and Reorient Experimental Satellites), a laboratory for spacecraft guidance and control onboard the ISS. 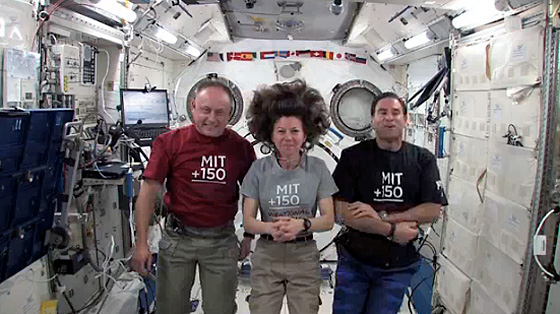 Three astronaut alumni — from left Mike Fincke ’89, Cady Coleman ’83 and Greg Chamitoff PhD ’92 — taped a message for MIT's 150th anniversary while they were all on the International Space Station. Watch the video message
Dava Newman, professor of aeronautics and astronautics and engineering systems, was principal investigator for the Dynamic Load Sensors experiment that measured astronaut-induced disturbances of microgravity on STS-62 in 1994. She was also a co-investigator on the Mental Workload and Performance Experiment, which assessed astronauts’ workload in microgravity aboard STS-42 in 1992.

Laurence Young, the Apollo Program Professor of Aeronautics and Astronautics, led experiments on the adaptation of the human vestibular system to microgravity on several space shuttle missions, and was a backup payload specialist for STS-58 in 1993. The late Julian Szekely, professor of materials science and engineering, developed material science experiments that flew aboard space shuttle missions STS-65 in 1994 and STS-94 in 1997.

Last but not least, NASA has turned to MIT experts for insight into the shuttle program’s Challenger and Columbia accidents.

President Ronald Reagan named professor emeritus of aeronautics and astronautics Eugene Covert to the presidential commission that investigated the 1986 Challenger explosion. Following the Space Shuttle Columbia accident in 2003, Institute Professor Sheila Widnall served as a member of the Columbia Accident Investigation Board.

“The space shuttle has been a truly amazing flight vehicle,” says Hoffman, the MIT professor who is a veteran of five shuttle missions. “Building a large, reusable spacecraft was a bold step. It’s the most versatile spacecraft that’s ever been built.”

“The downside is that because of the many requirements that the space shuttle needed to satisfy, design compromises had to be made,” he adds. “It is not as robust a system as it should have been, so it had to be operated within a limited range of operational constraints. Both the Challenger and Columbia accidents occurred because people knowingly operated it outside of these limits.”