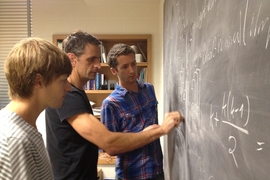 Caption:
From left to right: Chris Smillie, Eric Alm and Mark Smith.
Much as people can exchange information instantaneously in the digital age, bacteria associated with humans and their livestock appear to freely and rapidly exchange genetic material related to human disease and antibiotic resistance through a mechanism called horizontal gene transfer (HGT).

In a paper appearing in Nature online Oct. 30, researchers — led by Eric Alm of MIT's Department of Civil and Environmental Engineering and Department of Biological Engineering — say they've found evidence of a massive network of recent gene exchange connecting bacteria from around the world: 10,000 unique genes flowing via HGT among 2,235 bacterial genomes.

HGT is an ancient method for bacteria from different lineages to acquire and share useful genetic information they didn't inherit from their parents. Scientists have long known about HGT and known that when a transferred gene confers a desirable trait, such as antibiotic resistance or pathogenicity, that gene may undergo positive selection and be passed on to a bacterium's own progeny, sometimes to the detriment of humans. (For example, the proliferation of antibiotic-resistant strains of bacteria is a very real threat, as seen in the rise of so-called "superbugs.")

But until now, scientists didn't know just how much of this information was being exchanged, or how rapidly. The MIT team's work illustrates the vast scale and rapid speed with which genes can proliferate across bacterial lineages.

"We are finding [completely] identical genes in bacteria that are as divergent from each other as a human is to a yeast," says Alm, the Karl Van Tassel Associate Professor. "This shows that the transfer is recent; the gene hasn't had time to mutate."

"We were surprised to find that 60 percent of transfers among human-associated bacteria include a gene for antibiotic resistance," adds computational systems biology graduate student Chris Smillie, one of the lead authors of the paper.

Moreover, the team identified 43 independent cases of antibiotic-resistance genes crossing between nations. "This is a real international problem," says microbiology graduate student Mark Smith, another lead author of the study. "Once a trait enters the human-associated gene pool, it spreads quickly without regard for national borders."

The practice of adding prophylactic antibiotics to animal feed to promote growth and prevent the spread of disease in densely housed herds and flocks is widespread in the United States, but has been banned in many European countries. According to the Federal Drug Administration, more than 80 percent of the 33 million pounds of antibiotics sold in the United States in 2009 was for agricultural use, and 90 percent of that was administered subtherapeutically through food and water. This includes antibiotics such as penicillins and tetracyclines commonly used to treat human illness.

The MIT researchers found that HGT occurs more frequently among bacteria that occupy the same body site, share the same oxygen tolerance or have the same pathogenicity, leading them to conclude that ecology — or environmental niche — is more important than either lineage or geographical proximity in determining if a transferred gene will be incorporated into a bacterium's DNA and passed on to its descendants.

"This gives us a rulebook for understanding the forces that govern gene exchange," Alm says.

The team applied these rules to find genes associated with the ability to cause meningitis and other diseases, with the hope that transferred traits and the genes encoding those traits might make especially promising targets for future drug therapies.

"This is a very interesting piece of work that really shows how the increasing databases of complete genome sequences, together with detailed environmental information, can be used to discover large-scale evolutionary patterns," says Rob Knight, associate professor of chemistry and biochemistry at the University of Colorado at Boulder, who says he agrees with the authors' findings. "The availability of vast datasets with excellent environmental characterization will give us an unprecedented view of microbes across the planet."

Continuing the work, the researchers are now comparing rates of exchange among bacteria living in separate sites on the same person and among bacteria living on or in people with the same disease. They're also studying an environmentally contaminated site to see which swapped genes might facilitate microbial cleanup by metal-reducing bacteria.

The work is part of the National Institutes of Health's Human Microbiome Project. It was funded by the Department of Energy's ENIGMA Scientific Focus Area and the National Science Foundation.