A better way to target tumors

In 2004, the drug company AstraZeneca launched a clinical trial for a new type of lung-cancer drug. The drug, called gefitinib, interferes with EGFR, a molecule that abounds on the surface of many cancer cells. Overactive EGFR (epithelial growth factor receptor) helps tumor cells divide uncontrollably.

Although gefitinib had shown promise in earlier studies, this time the results were disappointing: Most patients did not live longer. The drug was taken off the market, though smaller clinical trials continued.

Cancer biologists later showed that gefitinib should only work in patients with a specific mutant form of EGFR. Since then, trials that screen patients for that mutation before giving them the drug have produced better results, and the drug is now available to certain lung-cancer patients.

The tale of gefitinib demonstrates the importance of carefully matching drugs to subsets of patients with specific mutations in their tumor cells, says Michael Hemann, MIT assistant professor of biology and a member of the David H. Koch Institute for Integrative Cancer Research at MIT.

“The classical approach to drug development is to target a very common cancer and cure as many patients as possible,” says Hemann. “If you have a drug failure rate of 90 or 95 percent, it’s difficult to get it approved. But if you can identify the 5 or 10 percent for whom it’s effective, you could have a good drug for a small population of patients.”

Cancer researchers have been pursuing targeting therapies for years, but so far have little to show for it. The drug Gleevec, which has essentially transformed a specific type of leukemia known as CML into a manageable, chronic condition, is a rare success story. 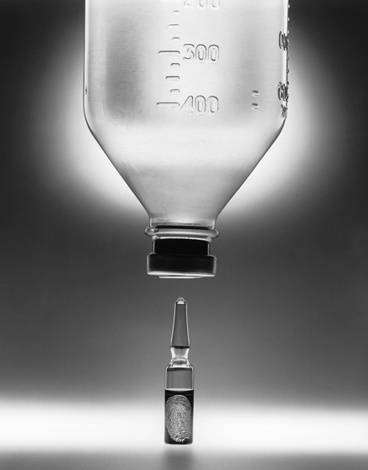 Michael Yaffe, MIT professor of biology and Koch Institute member, says he is disappointed that personalized medicine has not yet become more widely used. One reason, he says, is that much of the new information that cancer biologists are discovering about how mutations influence tumors’ response to drugs is not reaching doctors in the clinic.

“We need a better translational mechanism for being able to take the things we discover here at MIT and elsewhere, and test them directly in large clinical trials. That’s sort of a bottleneck that I think everyone is aware of,” says Yaffe. “There’s a lot of effort [at the Koch Institute] at the moment to enhance our connection to clinical centers to be able to do just this, to move these kinds of things forward.”

Out with the old

Many of the front-line chemotherapy drugs that doctors rely on to fight cancer were developed in the 1950s and 1960s, and only incremental improvements have been made since then. Most of those drugs act by damaging DNA, which forces tumor cells to commit suicide. Unfortunately, those drugs also attack DNA in healthy cells.

“With most conventional chemotherapy, you’re invariably going to have some side effects. You just don’t know that it’s going to help the patient,” says Hemann. “We can’t go on applying the same drugs, the same way we have been for years and years.”

Alan D’Andrea, chief of radiation and cancer biology at Dana-Farber Cancer Institute, would also like to see a more personalized approach to cancer treatment. He envisions a day when all cancer patients will have their tumors screened immediately after diagnosis, and doctors will use a profile of the tumor’s DNA mutations to choose the best treatment.

“With conventional cancer treatment, everyone is treated with the same set of drugs, even though we know only 25 percent of those patients may respond. Then we wait to see what will happen,” says D’Andrea. “If we could identify up front the patients who are not going to respond to conventional drugs, we could immediately put them on an experimental therapy.”

D’Andrea says that doctors are becoming more aware of the benefits of targeting drugs to specific tumor mutations. Dana-Farber, along with many other major teaching hospitals, now strongly encourages doctors to take genetic factors into account when selecting patients for clinical trials for new drugs or new combinations of existing drugs.

In with the new

Last year, Yaffe and Hemann showed that by screening tumors for mutations in p53 and ATM, two genes involved in DNA repair, they could predict whether a patient would respond to certain chemotherapy agents. With this information, doctors could choose treatments based on the status of the p53 and ATM genes in a patient's tumor, which can be revealed by staining tumor cells with antibodies that bind to the mutant proteins.

Though staining cells for p53 and ATM is a “standard” process, says Yaffe, hospitals are not routinely doing it.

“If you wanted a p53-ATM test, you would first have to talk to your doctor and show them the literature that explains why the test is beneficial, and then you would probably have to convince the clinical lab to do the staining. It’s not clear to me whether insurance would cover it,” says Yaffe.

Most cancer patients, with the notable exception of breast-cancer patients, are not routinely screened for specific mutations. Breast tumors are usually tested for mutations in several genes, including HER2 (human epidermal growth factor receptor 2), which can reveal whether the drug Herceptin should be used.

Several companies have commercialized or are pursuing diagnostic tests based on tumor mutations. “If you want to get something quickly into the marketplace, industry sometimes works a lot better than academia. This might be one example,” says Yaffe.

Yaffe and Hemann are also on the hunt for potential new drug targets, which they believe could be found in cellular pathways that control DNA repair, cell division, or stability of RNA (the molecules that carry DNA’s instructions to the rest of the cell). “Every alteration that promotes cancer development represents a cancer-cell vulnerability,” says Hemann. “In many cases they’re poised on the brink of death, and targeted therapies can exploit that.”

However, their work investigating how mutations affect tumors’ response to combinations of existing drugs could have a more immediate impact.

“Much of the research we’re doing is using drugs that are already in the clinic. We’ve done this intentionally because if we can make a significant discovery, then applying it to patients may not have to change current therapy in any dramatic way,” says Yaffe. “There’s a lot of room to improve patient outcomes using the drugs that currently exist, if we just knew how to use them in a much more intelligent way.”