MIT’s dean of engineering has been confirmed by the United States Senate to direct the largest supporter of non-medical basic-science research in the country.
News Office
Publication Date:
Press Inquiries 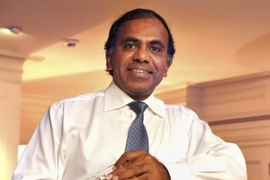 ↓ Download Image
Caption: Subra Suresh, dean of the MIT School of Engineering, has been confirmed by the U.S. Senate to serve as the next director of the National Science Foundation.
Credits: Photo: Justin Knight

Caption:
Subra Suresh, dean of the MIT School of Engineering, has been confirmed by the U.S. Senate to serve as the next director of the National Science Foundation.
Credits:
Photo: Justin Knight
Subra Suresh, dean of the School of Engineering and Vannevar Bush Professor of Engineering at MIT, last night was confirmed unanimously by the U.S. Senate to be the next director of the National Science Foundation (NSF) for a six-year term. As director, he will lead a $7.4 billion independent federal agency that supports all fields of science and engineering research, as well as a wide span of educational programs that reach more than 2,000 institutions across the U.S. and involve approximately 200,000 educators, researchers and students. NSF funding accounts for more than half of all non-medical science and engineering basic research at American academic institutions. Suresh was nominated to the position in June by President Barack Obama. It is planned that sometime in the next two weeks, Suresh will be sworn in by John Holdren ’65, SM ’66, President Obama’s Science Advisor and director of the Office of Science and Technology Policy.

“Dean Suresh has led MIT's School of Engineering with energy and effectiveness, while at the same time pursuing his own research portfolio at the intersection of the life sciences and engineering,” said MIT Provost L. Rafael Reif. “I wish him well — and I thank Professor Barnhart for agreeing to help the Institute ensure a smooth transition as our colleague heads to Washington.”

Suresh’s work as a researcher, educator and academic administrator across a wide range of disciplines — including mechanical engineering, materials science and biomedical engineering — has been recognized by academic and professional organizations around the world. His experimental and computational modeling work on the mechanical properties of structural and functional materials, his innovations in materials design and characterization and his discoveries regarding the connections between cellular nanomechanics and human diseases such as malaria have shaped new fields at the intersections of traditional disciplines. More than 100 students, post-docs, and visiting scientists have trained in his laboratory, and he has published 230 research articles, 20 patents and three books.

Over three decades at MIT, Suresh has contributed as a graduate student, parent, faculty member and dean. While serving as head of the Department of Materials Science and Engineering from 2000 to 2006, he renovated highly visible spaces along the Infinite Corridor to give the general public an insider’s view of modern materials research and instruction, and, in partnership with the Department of Physics, he helped launch the Physics-DMSE-Spectroscopy-Infrastructure (PDSI) project. Suresh was the Institute’s lead coordinator on the creation of the Singapore-MIT Alliance for Research and Technology (SMART) Center and founded the Global Enterprise for MicroMechanics and Molecular Medicine (GEM4) in 2005. Since becoming dean in 2007, Suresh oversaw the recruitment of more than 50 new faculty members to the School of Engineering, attracting high numbers of women and under-represented minorities. During his tenure, the school also launched several new initiatives: the Center for Computational Engineering, Transportation@MIT, the Bernard Gordon Engineering Leadership Program, and the MIT Flexible Engineering Degree Program.

“MIT has long benefited from Dean Suresh’s scholarship, teaching, leadership and dynamism,” said MIT President Susan Hockfield. “MIT has a proud history of national service, and in that tradition Dean Suresh will bring his great gifts to the extraordinarily important work of the National Science Foundation.”