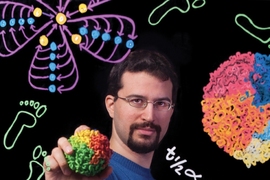 ↓ Download Image
Caption: Erez Lieberman-Aiden, graduate student in the Harvard-MIT Division of Health Sciences and Technology, has been named the winner of the 2010 $30,000 Lemelson-MIT Student Prize.
Credits: Image courtesy of Lemelson-MIT Program

"This year's winners from the Massachusetts Institute of Technology, California Institute of Technology, Rensselaer Polytechnic Institute and University of Illinois at Urbana-Champaign shine light on the significance of collegiate invention. They have the ability to transform seemingly implausible ideas into reality and are the true entrepreneurial leaders of their generation," states Joshua Schuler, executive director of the Lemelson-MIT Program. "The Lemelson-MIT Student Prize winner, Erez Lieberman-Aiden, demonstrates how persistence, creativity and focus can lead to enormous strides in innovation."