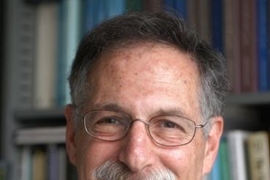 Credits:
Photo: Donna Coveney
MIT economist and Institute Professor Peter Diamond PhD ’63 has been nominated by U.S. President Barack Obama to serve on the Board of Governors of the Federal Reserve, the central bank of the United States. If confirmed to what would be a 14-year term, Diamond would be one of seven governors on the board.

As a member of the Fed’s board, Diamond would automatically serve on the Federal Open Market Committee (FOMC), the group that influences economic activity, employment and inflation by setting key interest rates. At the moment, interest rates are low in an effort to spur lending, investment and growth following the deep recession that began in late 2007.

The Fed also studies national and international economic conditions and helps supervise the financial services industry. Congress is currently considering whether to augment the Fed’s regulatory responsibilities as part of its drive to reform the financial system.

In addition to nominating Diamond, Obama today announced he was naming two others to serve on the Federal Reserve’s central board: Janet Yellen, currently president of the Federal Reserve Bank of San Francisco (nominated to be vice chair of the Fed), and Sarah Raskin, a lawyer who is Maryland’s commissioner of financial regulation.

“The depth of experience these individuals bring in economic and monetary policy, financial regulation, and consumer protection will make them tremendous assets at the Fed,” Obama said today in a statement released by the White House. “I am grateful they have chosen to dedicate their talents to serving the American people.”

Diamond, a former chair of MIT’s Department of Economics, has made research advances in both macroeconomics and microeconomics during a wide-ranging career, studying subjects including growth, taxation and labor market searches. In recent decades he has analyzed social insurance programs closely and become a prominent authority on Social Security.

Among the many books and papers Diamond has published, he is co-author of the volume Saving Social Security: A Balanced Approach (Brookings Institution Press, 2004), along with Peter Orszag, currently director of the Office of Management and Budget at the White House.

In recent years, Diamond has taken an interest in behavioral economics, the branch of economics that borrows from psychology and sociology to explain why people do not always make rational decisions.

Although Diamond's name has been floated as a possible Fed nomination for weeks, he has refrained from commenting publicly about the position, in advance of Senate confirmation hearings. Diamond again declined to comment today.

The nomination is an “inspired decision,” said Henry Aaron, a senior fellow in economic studies at the Brookings Institution in Washington, who expressed hope that Congress will confirm Diamond expediently. “Peter brings extraordinary intelligence, judgment, and creativity to a position that carries with it the power to influence the lives of people in the United States and abroad.”

Diamond’s long-time colleagues applauded the nomination. Ricardo Caballero, chair of the MIT Department of Economics, said, “Peter represents the very best that an academic economist has to offer to Washington: a superb and open mind, an insatiable appetite for understanding the institutional details of a problem and policy, and a spirit of service.”

From mathematics to economics

After receiving his undergraduate degree from Yale, Diamond entered MIT as graduate student in mathematics before transferring to the economics program. He completed his doctoral thesis under the supervision of Robert Solow, currently Institute Professor, Emeritus, at MIT. In 1966, Diamond joined MIT as an associate professor. He was promoted to full professor in 1970, and named Institute Professor, MIT's highest faculty honor, in 1997.

Diamond served as president of the American Economic Association in 2003, and has been a visiting scholar at Cambridge University, Oxford University and Harvard University, among other institutions. Diamond has received Guggenheim and Fulbright fellowships; he is also a fellow of the American Academy of Arts and Sciences and a member of the National Academy of Sciences.

Diamond, 69, is retiring from MIT this spring. On Friday, April 30, Diamond’s retirement will be commemorated with the premiere of a work composed by another of MIT's Institute Professors, John Harbison.

While Obama is currently attempting to fill multiple vacancies in the leadership of the Federal Reserve, the U.S. Senate confirmed Ben Bernanke PhD ’79 to his second term as Federal Reserve chairman in January of this year, a position that has a four-year term.