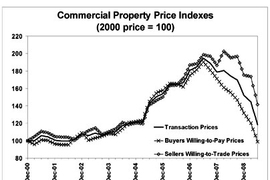 Transaction prices of commercial property sold by major institutional investors fell by 18 percentÂ in the second quarter of 2009, according to an index developed and published by the MIT Center for Real Estate (MIT/CRE).

The 18.1 percent drop in the transactions-based index (TBI) for the second quarter is by far the biggest quarterly decline in the gauge's 25-year history. (The second-biggest down quarter was the fourth quarter of last year, at -10.6 percent.) This was the fifth consecutive quarterly drop and the seventh in the past eight quarters. The index is now down 22 percent year-to-date, down 32 percent from where it was a year ago and down 39 percent from its mid-2007 peak -- far greater in nominal terms than the 27 percent drop the index experienced in the previous major commercial property downturn in the late 1980s and early 1990s (the two drops are now tied in real terms, net of inflation, at 41 percent), and substantially greater than the current drop in national housing prices (about 30 percent).

"The big news this quarter is not just the magnitude of the drop, but the fact that transaction volume actually increased in the presence of this decline, the first volume increase since last summer," said Professor David Geltner, director of research at MIT/CRE. "Perhaps most important, the supply-side index of the prices property owners are willing to sell at plunged a record 18.5 percent, suggesting a degree of 'capitulation' which may help to bring market prices finally to a bottom; this is the kind of thing that could begin to rebuild liquidity in the market."

MIT/CRE publishes not only the price index based on closed deals, but also compiles indices that separately gauge movements on the demand side and the supply side of the market that it tracks. The demand-side index tracks the changes in prices that potential buyers are willing to pay (sometimes called a "constant-liquidity" index of the market, because it tracks how much prices would have to change to keep a constant ability to sell as many properties at the same rate of trading volume). That index has now fallen steadily for all of the past eight quarters. It fell again in the second quarter, almost in lock-step with the supply-side index, bringing the demand index now to a level 48 percent below its mid-2007 peak.

"As is generally the case, the results posted by our index are corroborated by recent evidence from another commercial property price index whose methodology was developed at the MIT/CRE: the Moody's/REAL Commercial Property Price Index, produced by Moody's Investors Service," said MIT/CRE Research Technician Holly Horrigan. "The Moody's/REAL report released by Moody's on July 20 indicated that index dropped 16 percent during April and May alone, which by May put it already down 22 percent year-to-date and 35 percent below its 2007 peak," Horrigan noted.

The TBI tracks the prices that institutions such as pension funds pay or receive when transacting commercial properties like shopping centers, apartment complexes and office towers. The MIT Center's TBI is based on prices of National Council of Real Estate Investment Fiduciaries (NCREIF) properties sold each quarter from the property database that underlies the NCREIF Property Index (NPI), and also makes use of the appraisal information for all of the currently 6,000 NCREIF properties. Such an index -- national, quarterly, transaction-based and by property type -- had not been previously constructed prior to MIT's development of it in 2006. NCREIF supported development of the index as a useful tool for research and decision-making in the industry.