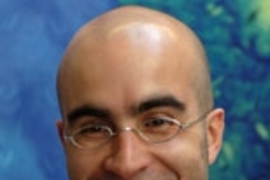 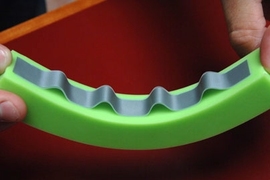 ↓ Download Image
Caption: MIT mathematician Pedro Reis demonstrates the delamination that occurs when a surface is compressed: The tape detaches from the surface and forms blisters of uniform size and spacing.
Credits: Photo / Donna Coveney 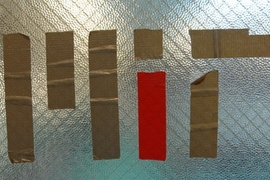 ↓ Download Image
Caption: This sign on the door of an MIT laboratory inspired researcher Pedro Reis to investigate the physics behind the delamination of adhesives such as tape.
Credits: Photo / Donna Coveney

Caption:
MIT mathematician Pedro Reis demonstrates the delamination that occurs when a surface is compressed: The tape detaches from the surface and forms blisters of uniform size and spacing.
Credits:
Photo: Donna Coveney
A study of stickers peeling from windows could lead to a new way to precisely control the fabrication of stretchable electronics, according to a team of researchers including one at MIT.

Stretchable electronics, which would enable electronic devices embedded into clothing, surgical gloves, electronic paper or other flexible materials, have proven difficult to engineer because the electrical wiring tends to be damaged as the material twists.

A study published in the online edition of the Proceedings of the National Academy of Sciences the week of June 15 offers a new approach to designing such circuits.

The research team did not have stretchable electronics in mind when they started, but launched the project as an analysis of the wrinkling and delamination of stickers. The small blisters that appear in stickers attached to car windows are a common example of such delamination.

"It's something that's around you all the time — but if you look at it a different way you can see something new," says Pedro Reis, applied math instructor at MIT and senior author of the PNAS paper.

Reis collaborated on the study with Dominic Vella, Jose Bico, Arezki Boudaoud and Benoit Roman of the French National Centre for Scientific Research.

A model of delamination

Delamination commonly occurs due to different rates of heat-induced expansion between a thin film and the surface to which it is attached. Common examples are the blisters formed in stickers attached to a window, when exposed to sunlight.

Alternatively, compression of the surface can also lead to delamination. As the surface is compressed, the film bends with it until it reaches a certain energy threshold, then pops away from the surface, forming small blisters.

The researchers performed well controlled experiments to stretch and compress surfaces with thin films attached to them, and measured the dimensions of resulting blisters. From their experimental data, the team developed a theory to explain the formation, size and evolution of the blisters.

MIT Tech TV
In this video, a surface (pink) is compressed until the orange tape attached to it delaminates, forming blisters.
Video courtesy of Pedro Reis

They found that blister size depends on the elasticity of the film and the substrate and the strength of adhesion between them. The team's model allows them to predict the size of the blisters that will form under specific conditions.

Though delamination is usually viewed as something to be avoided, the researchers realized that by intentionally creating delaminated surfaces, they could design devices that allow wires attached to a surface to move with the material without breaking. If the wires are already partially separated from the material, they won't break under stress from twisting and stretching of the substrate.

Other researchers have tried to create stretchable electronics by blistering the material, but the new model makes the job much easier. Using this approach, delamination can be precisely controlled by changing the strength of adhesion and the elastic properties of the film and wires. Previous work on stretchable electronic devices relied on complex microfabrication techniques to force delamination blisters to appear. Sometimes, this forces the blisters to become larger than their intrinsic size.

"Delamination blisters have a characteristic size that they try to choose for themselves," says Vella. "We've characterized this size so that in principle it can be determined just from the parameters of a given system."

Work on stretchable electronics has been ongoing over the past decade, and the technology has already been used in applications such as electronic paper and flexible displays. Prototype phones are also in the works.

The new study suggests that ultra-thin, flexible but strong materials such as graphene are ideal candidates for stretchable electronic applications.

The work was funded by the EU-NEST (New and Emerging Science and Technology) program and the French Agence National Recherche.