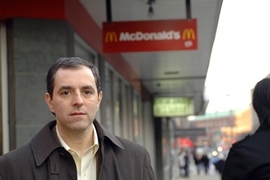 Caption:
MIT Economics Professor David H. Autor's recent study finds that if long-term job market trends continue, the person asking "Do you want fries with that?" will be increasingly likely to have a college education.
Credits:
Photo / Donna Coveney

If long-term job market trends continue, the person asking, "Do you want fries with that?" will be increasingly likely to have a college education, an MIT analysis finds.

Dramatic shifts in the U.S. labor market in the last 25 years are relegating older workers -- even those with a college education -- to lower-wage jobs, according to a research paper by MIT Economics Professor David Autor.

This trend appears likely to steepen in the current recession, as employers accelerate the rate at which they shed nonessential positions.

In a paper co-authored with graduate student David Dorn, "This Job is 'Getting Old': Measuring Change in Job Opportunities using Occupational Age Structure," which was presented last month at the American Economics Association conference, Autor analyzes a phenomenon that he refers to as the "hollowing out" of the U.S. job market from 1980 to 2005.

"One of the most remarkable developments in the U.S. labor market of the past two and a half decades has been the rapid, simultaneous growth of employment in both the highest- and lowest-skilled jobs," Autor says. European labor markets echo this shift.

Automation, computerization and offshoring are reducing the number of middle-wage, skilled occupations -- stock clerks, inspectors, telemarketers, payroll workers, sales agents and software programmers -- Autor finds. These jobs are particularly vulnerable to automation because their core tasks follow well-understood routines that can increasingly be codified in software and executed by machinery.

As the labor market "hollows out," workers who in a previous generation would have occupied middle-skill, white-collar positions must increasingly find their fortunes elsewhere -- either in high-skill, high-education professional, technical and managerial positions, or in less-educated manual labor and in-person service jobs. Autor's data indicate that since 1980, older workers with at least some college education are increasingly doing what was once thought of as "non-college" work, i.e. non-routine, but not highly skilled jobs.

According to data compiled by Autor and Dorn, the share of college-educated workers found in low-wage, non-routine occupations rose from 19.9 percent to 23.6 percent from 1980 to 2005. Moreover, the average age of those with college education working in such jobs rose by 6.7 years during this time.

"While young college workers are gaining employment in high-skill, non-routine occupations, older college workers are increasingly found in low-skill, non-routine work," Autor says. And as computers and offshore sourcing continue to reduce jobs in areas such as accounting and sales, this trend has accelerated. While economists can only speculate about the effect of the ongoing sharp contraction of world economic activity on this trend, it seems likely that employers will attempt to reduce costs wherever possible, which may mean using increasingly cheap automation to substitute for relatively expensive white-collar workers.

When occupations contract, the average age of workers in those occupations tends to rise, Autor says. "Young people don't want to stake their futures in shrinking fields. Meanwhile, older workers have an incentive to stick around as they have skills and knowledge specific to these jobs."

Young workers also have the opportunity to tailor their educational paths to match the current state of the labor market. "Young college workers are basically educating themselves for a set of activities that are in rising demand," Autor says. "It's more difficult for a mid-career worker to say, 'Oh, there are not too many opportunities for middle management these days, I think I'll go to law school.'"

Thus, Autor's findings underscore the importance of both career retraining and, potentially, public assistance with health coverage in softening the brunt of the economic downturn on older workers. But they also challenge assumptions about the long-term value of a college education.

Higher education, particularly an advanced degree, is still the best way of ensuring future income, Autor says. However, "the degree to which a college education insulates you from downturns and from loss of prestige and earning power of your occupation is unfortunately smaller than it used to be."