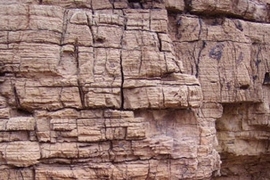 ↓ Download Image
Caption: Evidence of early sponges was found in these sediments in Oman, a Marinoan age (about 635 million yearÂ old) rock unit of calcium carbonate deposited on rocks of glacial origin. The oldest sponge steroids detected in sedimentary rocks underlie this cap carbonate, and so pre-date the end of the global Marinoan glaciations.
Credits: Photo courtesy / David Fik

Caption:
Evidence of early sponges was found in these sediments in Oman, a Marinoan age (about 635 million yearÂ old) rock unit of calcium carbonate deposited on rocks of glacial origin. The oldest sponge steroids detected in sedimentary rocks underlie this cap carbonate, and so pre-date the end of the global Marinoan glaciations.
Credits:
Photo courtesy / David Fik

Even Charles Darwin was puzzled by the apparently sudden appearance in the fossil record of a great variety of multicellular creatures -- a rapid blossoming known as the Cambrian explosion. Since then, the origin of animals was found to extend back earlier, through a period known as the Ediacarian. Now, evidence found by researchers at MIT, UC Riverside and other institutions shows that the first complex life forms may in fact have appeared much earlier still.

Our earliest animal ancestors, it appears, were sponges -- multicellular animals that feed by passing seawater though a complex system of internal channels. And these earliest sponges may predate the Ediacarian period by as much as 80 million years, this new evidence shows.

Soft-bodied animals such as sponges are very rarely preserved as fossils, so finding evidence of their early appearance required some clever detective work. The key turned out to be an examination of unusual chemicals: steroids of a particular type produced abundantly by sponges but virtually never by simpler organisms.

Studying an unusually well preserved long sequence of strata found in Oman, the research team was able to extract these "chemical fossils" from a large number of samples spanning a range of tens of millions of years -- before, during and after the Ediacarian period. This provided clear evidence that sponges must have evolved long before the great variety of multicellular organisms that proliferated at the dawn of that period.

The new research, which appears this week in the journal Nature, was conducted in MIT's Department of Earth, Atmospheric and Planetary Sciences (EAPS), under the direction of Professor of Geobiology Roger Summons. He says that the study began when he was asked to examine samples of oil from wells in Oman that tap into the oldest oil-producing fields in the world. The oil samples from these wells "are unique in geological history for their great age and geochemical composition, so we were looking for unusual molecular fossils." At the same time, another MIT professor, Samuel Bowring, and his postdoc, Daniel Condon, were able to assign precise ages to a number of volcanic ash layers in the same wells using uranium-lead geochronology techniques developed in his laboratory. The combination of the precise ages and diagnostic chemical fossils is a particularly compelling aspect of the research.

And, after painstaking chemical analysis, they found sponge-derived steroids in abundance -- and with them, strong new evidence that sponges, among the simplest forms of multicellular life, were indeed the first such organisms on Earth. In short, they had found clear signs of the very base of the evolutionary tree of animal life.

"I'm not surprised by any of this," Summons says, because others had already hypothesized, based on genomic evidence, that sponges were the earliest form of animal life. But that evidence had remained somewhat controversial, and with the new findings "we nailed it by removing all sorts of ambiguities."

"This might also represent the advent of the earliest reef systems made by animals rather than microbes," Summons says. And the establishment of that new ecological niche may have helped pave the way for the later explosion of complex organisms, around 580 million years ago.

At that time in geological history, the Earth was just coming out of the last of its "snowball Earth" phases, when the entire planet was shrouded in ice. Since the new findings show that complex life seems to have begun tens of millions of years before that, that means these organisms were able to survive through that extreme episode of glaciation, something that many scientists had thought was impossible. This provides new evidence that the freezing was not absolute, but instead left some open patches of water.

"There's plenty of evidence in these rocks that there were places on Earth where life was flourishing" during this snowball episode, known as the Cryogenian, Summons says. "There must have been some refugia. Life certainly didn't shut down."

The lead author of the Nature paper is Gordon D. Love, who was a postdoc at MIT when the research was done and is now a professor at the University of California, Riverside. Other authors include Emmanuelle Grosjean another former postdoc now at Geoscience Australia; Charlotte Stalvies of the University of Newcastle upon Tyne, U.K.; postdoc David A. Fike and former MIT professor John Grotzinger of Caltech; graduate students Alexander Bradley, Amy Kelly, Maya Bhatia; Bowring and Condon; and William Meredith and Colin Snape of the University of Nottingham, U.K.

The work was funded by Petroleum Development Oman, the NASA Exobiology Program, the NSF EAR program, the Agouron Institute and the NASA Astrobiology Institute.