Music at MIT hitting all the right notes 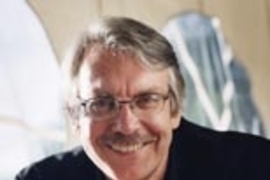 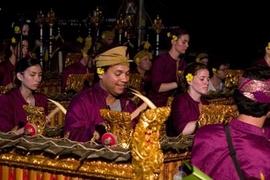 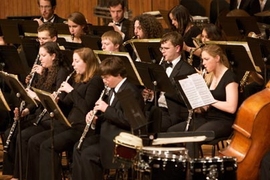 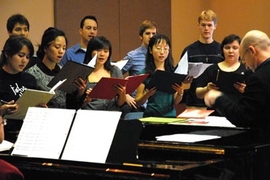 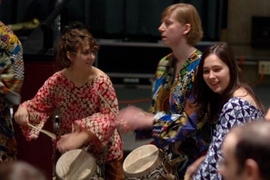 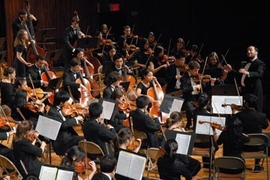 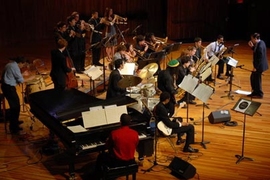 Later this month, the MIT community will celebrate the 70th birthday of one of America's most prominent and prolific composers with a special tribute concert and symposium.

That the individual in question, Pulitzer Prize-winning musician John Harbison, has been a member of the MIT faculty for four decades may come as a surprise to many in the outside world who tend to equate the Institute with white coats, computer algorithms, rocket science, quantum physics and cutting-edge efforts to cure cancer and solve the energy crisis.

Harbison and the music scene at MIT are among the Institute's best-kept secrets, but they shouldn't be. Scientists and engineers have often been avid musicians — think of Albert Einstein and his violin or physicist Richard Feynman and his drums. The fact is, music at MIT plays a cathartic role in campus life and displays many of the bold characteristics — innovation, ingenuity, excellence and creativity — that lie at the heart of the MIT culture.

"Music at MIT is superb — and John is emblematic of that quality," says Associate Provost and Ford International Professor of History Philip S. Khoury, who has known Harbison for nearly 30 years. "He is one of the world's most distinguished and musically versatile composers, and he has always been completely devoted to teaching and, as he would say, learning from our remarkably talented students."

An artist known for lucidity and logic in his compositions and performances, Harbison is equally adept at opera, choral and jazz. His Pulitzer Prize came in 1987 for his choral work "The Flight into Egypt," with text from the Gospel of Matthew. Two years later, he was awarded a MacArthur "genius" grant for his work, and in 1995 he became an Institute Professor — the highest honor MIT can bestow on a member of the faculty.

Harbison, who is currently working on music inspired by Alice Munro's short stories, says MIT students bring with them the right ingredients for studying, composing and performing music: high intelligence, logical thinking, interest in structure and a curiosity about how things are made. In true MIT spirit, he tells students to break new ground and take risks.

"Go out and write things that your teacher won't necessarily approve of," he advises.

Music on the Mind

Whether it's tinkering with music-editing software, performing in one of MIT's eight professionally led music groups or making brain waves audible, music at MIT can mean many things.

In the Department of Brain and Cognitive Sciences, associate professor Pawan Sinha and graduate students are working on way to create music and art from brainwaves.

Intrigued with the possibility of understanding how minds extract meaning from sounds, Sinha has charted the electroencephalographic (EEG) response of brain neurons to tone sequences. Using a form of video gaming headsets that pick up these brain signals and by associating them with specific sounds, Sinha eventually hopes to allow an individual to "perform" in an orchestra simply by thinking. Sinha is also designing a "Your Brain on Music" program in which a person would watch a shifting electronic projection of EEG signals that reflects his or her brain's response to a piece of music. And, in what is perhaps his most ambitious project, Sinha hopes to design a "Brain Jukebox" that would let listeners hear music through the transformational lens of another person's brain

Sinha's research is in line with MIT's emphasis on interdisciplinary collaborations — and he is not alone in melding music with basic or applied research. Elaine Chew SM '98, PhD '00, an engineer and pianist who has designed algorithms for real-time analysis of music compositions based on mathematical models, and used them in her performances and lecture-concerts, says her engineering and music studies at MIT were entwined.

"There are deep connections between the way the human mind works when making music, and when it solves problems in the sciences," she says. "Asking if my music studies help my engineering studies is analogous to asking a computational biologist if her biological studies help her statistical studies."

Chew's passion for music is fairly typical of the average MIT student. More than 60 percent of incoming freshmen declare advanced proficiency in a musical instrument, and at least 1,400 MIT students enroll each year in a music and theater arts class. As part of the Emerson Program for Private Instruction, the Institute offers scholarships each year to some 50 of its most talented scholar-musicians to pursue private instruction on their instrument with local master teachers.

While only a few MIT students eventually pursue a full-time career in music, many graduates incorporate performance or composing into their professional and private lives. Such alumni include Eran Egozy '95, MEng '95, and Alex Rigopulos '92, SM '94, who founded the company that created "Guitar Hero." This hugely popular video game emerged from the pair's interest in providing a way for average people to express themselves musically through technology.

"Students are engaged in music and the arts in general at MIT as they are with all their other academic work: with intensity, passion, commitment and rigor," says Fred Harris, director of wind ensembles and lecturer in music. "Over and over I am told by students and alums that it's the opportunity to explore, study, create and perform music that is among their most important, treasured and long-lasting experiences at MIT."

Janet Sonenberg, professor of theater arts and head of the Music and Theater Arts Section, says much of the credit for MIT's creative music spirit goes to Harbison, who made it possible to attract an "extraordinary" group of arts faculty to MIT. Harbison, in turn, praises MIT for seeking to hire faculty with new approaches instead of being merely content to hand the baton to professors cut from the same template.

Such hires include Evan Ziporyn, the Kenan Sahin Distinguished Professor of Music. In 1993, Ziporyn founded the Gamelan Galak Tika, a Balinese music ensemble, not because it was logical for the Institute to have such a group but because he thought it would fit the Institute's quirky, expansive nature. "The kind of person that is going to seek out a Gamelan is similar to the kind of person who is going to seek out a robot club to build robots," he says.

Teaching music at MIT was once thought to be about training the audiences of tomorrow, but today it's about letting students have all manner of musical experiences, says Ziporyn. Among other things, he has taught a course in computer music composition, in which students write music with computer-processed sound. Many of the students who take that course have little formal music training, but know far more about computers than he does, Ziporyn says.

The Harbison celebration concert, which begins at 8 p.m., April 24 in Kresge Auditorium, is free and open to the public. For more information, please visit: http://web.mit.edu/arts/announcements/prs/2009/0212_Harbison.html.

A version of this article appeared in MIT Tech Talk on April 15, 2009 (download PDF).