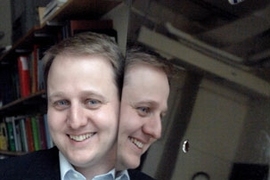 Ever since the 1940s, chrome has been used to add a protective coating and shiny luster to a wide range of metal products, from bathroom fixtures to car bumpers.

Chrome adds beauty and durability, but those features come at a heavy cost. Though it's cheap to produce and harmless to consumers, the industrial process to create it is dangerous for workers and pollutes the environment.

"People have been trying to replace it for a very long time," says Christopher Schuh, MIT associate professor of materials science and engineering. "The problem is that it's the only plated metal coating that has all of these properties -- hardness, long-lasting shine and corrosion protection."

Until now, that is. Schuh and his collaborators have developed a new nickel-tungsten alloy that is not only safer than chrome but also more durable. The new coating, which is now being tested on the bumpers of a truck fleet, could also replace chrome in faucet fixtures and engine parts, among other applications.

Manufacturers have long had a love/hate relationship with chromium plating, which is a $20 billion industry.

Electroplating, the technique used to coat metal objects with chrome, involves running a current through a liquid bath of chromium ions, which deposits a thin layer of chrome on the surface of an object placed in the bath.

Manufacturers have put up with the mess and the safety hazards, which require strict handling precautions, because of chrome's unique properties.

Chrome's hardness -- it is considerably harder than steel -- comes from its nanocrystalline structure. Schuh and his group set out to duplicate that structure with a material that could be easily and safely electroplated.

They started with nanocrystalline nickel, but nickel on its own, though very hard when first plated, loses its hardness as the crystals gradually expand from nanoscale to microscale. Using computer models developed to predict material properties, Schuh settled on a nickel-tungsten alloy that is environmentally friendly and proved to be even more durable than chrome.

Schuh's team has shown that nickel-tungsten alloys remain stable indefinitely at room temperature and are highly resistant to decomposition when heated. They can also be made harder and longer lasting than chrome.

In addition, the electroplating process is more efficient than that for chrome, because multiple layers can be applied in one step, which could save money for manufacturers.

"Not only do you get rid of the environmental baggage but you make a better product as well," says Schuh.

Schuh and his colleagues have described the new process in several journal articles published over the past few years, and Schuh recently gave an overview of the technology in the spring 2009 Wulff Lecture, sponsored by MIT's Department of Materials Science and Engineering.

The technology could be used to coat other products including shock absorbers and print rolls. Recent tests showed that print rolls coated with the new alloy lasted 10 times longer than their chrome-plated counterparts.

Another field of potential applications is electronics, particularly connectors for portable electronics (the jacks where power cords, headphones and other accessories are plugged in). Those connectors are now coated with a layer of gold, which must be thick to help prevent the corrosion of an inner layer of brass. Layering the nickel-tungsten alloy between the gold and brass layers could reduce corrosion and offer significant savings for electronics manufacturers by allowing them to use thinner layers of gold.

Schuh's collaborators on the new metal coating technology include Andrew Detor, a recent PhD graduate in materials science and engineering, and Alan Lund, a former MIT postdoctoral researcher and the current chief technology officer at Xtalic Corporation of Marlborough, Mass., which has commercialized the nickel-tungsten plating process.

The research was funded at MIT by the U.S. Army Research Office.