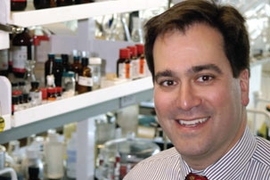 Professor Chad Mirkin, director of Northwestern University's International Institute for Nanotechnology, has been awarded the 2009 $500,000 Lemelson-MIT Prize for innovations that have the potential to transform the future of medical diagnostics and patient point-of-care and to ignite change across many industries from semi-conductors to healthcare.

Mirkin, the George B. Rathmann Professor of Chemistry at Northwestern, will accept the prize and present his accomplishments to the public at MIT during the Lemelson-MIT Program's third-annual EurekaFest, a multi-day celebration of the inventive spirit, June 25-27.

The author of 380 manuscripts and more than 350 patents and applications, Mirkin is among the world's most cited nanomedicine researchers. "Professor Mirkin's cutting-edge, innovative work is greatly contributing to America's economic competitiveness and will help ensure that the nation remains at the forefront of one of the most promising areas in science," said U.S. Rep. Daniel Lipinski (Ill.).

Mirkin is best known for the invention, development and commercialization of two technologies: the nanoparticle-based medical diagnostic assays underlying the FDA-approved Verigene ID(tm) system and Dip-Pen Nanolithography (DPN), an ultra high-resolution molecule-based printing technique. Both inventions were born, in part, out of Northwestern's Nanoscale Science and Engineering Center, funded by the National Science Foundation, and conceived, managed and directed by Mirkin. There, Mirkin's research, with the help of Northwestern graduate students and colleagues, has formed the basis of several start-up companies that are helping to bring his inventions from the lab to the market.

Nanotechnology as a disease detector

Current medical diagnostic tools make it challenging to understand the identities of molecules circulating in the human bloodstream, which provide early warning signs of disease. Often, a disease isn't detected until an illness has progressed and indicator molecules become visible in higher concentrations. Current genetic testing, often performed in a distant lab, may take weeks to deliver results and authenticate or rule out the presence of a threatening disease or illness - an inefficient and costly process with potentially negative health consequences.

Mirkin invented a highly precise method of identifying low concentrations of disease-signifying molecules. "In the case of proteins, the test can be thousands of times more sensitive than any commercial protein detection system out there, and has the power to revolutionize medical diagnosis," Mirkin said. Mirkin commercialized many of the nanoparticle-based medical diagnostic assays through Nanosphere Inc., leading to the development of the Verigene ID(tm) System. This innovative system can test patients for several different disease targets at the same time, on-site in a research laboratory, community hospital, or doctor's office in under an hour.

One of the most promising applications of this technology is in Alzheimer's disease, which affects as many as 5.3 million Americans. Today, patients can only be posthumously confirmed as having Alzheimer's. Mirkin's bio-barcode test has the potential to evaluate living patients for Alzheimer's by detecting very low concentrations of the protein associated with the disease, allowing for early intervention and potential treatment.

Mirkin's work with nanostructures made of gold has since led to new ventures and the founding of Aurasense, a company focused on developing a novel class of nanotherapeutics that are nontoxic and extremely effective in gene regulation for application in oncology and heart disease.

Printing is the cornerstone for many core technologies, including information transfer, electronics, medical diagnostics and drug discovery. Modern microfabrication processes have made printing on the microscopic scale widely accessible. The challenge of creating flexible tools that allow one to print on the nanoscopic scale led Mirkin to invent Dip-Pen Nanolithography (DPN).

This technology, licensed by NanoInk, can be used to print features of proteins, DNA and other biological materials on surfaces with sub-50 nanometer resolution. Commercialized in the form of the Nscriptor(tm), it has become a novel research tool, allowing scientists to better understand how cells interact with surfaces and function, the chemical and physical consequences of miniaturization, and how structures - including individual viruses - behave at the single particle level. This knowledge is important for learning how viruses infect cells, understanding the chemical and physical differences between healthy and cancerous cells, or discovering the genetic code associated with a new flu virus - all of which could lead to new therapeutics and diagnostics. DPN's applications extend even further than this to highly miniaturized polymer- and molecular-based electronics.

Mirkin also serves as a role model and leader for aspiring young scientists and inventors. Through work with the International Institute for Nanotechnology, Mirkin and his colleagues devise innovative science programs around the country to educate youth including the development of the DiscoverNANO web site, which introduces young people to nanotechnology. Currently, Mirkin is also working with Chicago's Museum of Science and Industry to complete a hands-on nanotechnology exhibit.

"Mirkin is an extraordinary scientist who is at the forefront of the growing field of nanotechnology," said Michael J. Cima, faculty director of the Lemelson-MIT Program. "His inventions are paving the way for the emergence of nanotechnology in medicine, with impact that extends far beyond the scientific community. Mirkin is truly deserving of this honor."

About the Lemelson-MIT Program

Jerome H. Lemelson, one of U.S. history's most prolific inventors, and his wife, Dorothy, founded the Lemelson-MIT Program at MIT in 1994. It is funded by The Lemelson Foundation. The Foundation's programs in the U.S and developing countries recognize and celebrate accomplished inventors; provide financial and mentoring support to grassroots inventors; offer hands-on opportunities that enable young people to develop their budding scientific curiosity; and disseminate technologies that improve people's lives.

Applications for the 2010 $500,000 Lemelson-MIT Prize are now available at http://web.mit.edu/invent/a-prize.html. The annual prize honors an outstanding mid-career inventor who is dedicated to improving our world through technological invention and innovation.

For more information about the Lemelson-MIT Program, visit http://web.mit.edu/invent.